Background: In recognition that the availability of resources in the medical facility forms part of the factors that influence the quality of healthcare, it is of vital importance to measure their outcome. The aim of this study was determine the efficiency of the medical facility through the use of beds in a secondary level hospital.

Methods: Through the Health Information Management System (HIMS), we examined statistical reports from July 2012 to June 2013 including variables such as expenses, patient days, occupancy rate, average length of stay by specialty and medical division, results were obtained for each strategic indicator, and these results were related assumptions proposing to assess hospital efficiency.

Results: Overall, we identified optimal efficiency of the medical facility without analysis of services, leads to deteriorating and low efficiency. The overall outcome of the five indicators applied overlooked saturation of services within the medical unit. However, the overall analysis shows the problem, noting the advantage of evaluating the same scenario from different perspectives.

Health systems in Latin America face challenges in equity, efficiency and access to care services. Learning how to deal with these challenges begins with a comprehensive analysis that considers all possible scenarios in the process of providing health services and is the basis for correct decision making in healthcare. In the report on global health in 2013, The World Health Organization (WHO) shows that research provides the scientific data needed to define the services and support policies required in a given environment; as well as to measure the progress made in achieving a goal by using valid and appropriate indicators.1 By performing data analysis with various indicators of a particular process in health, the issues of phenomena that occur in healthcare can be clearly identified through an approach that considers most or all possible scenarios.2,3 Medical care units at hospitals are spaces where different medical specialties interact, as well as other scientific disciplines in administrative areas, which together make up network of care processes, in addition to being the place where the population’s most complex health problems are met.

Knowing with what and how a hospital’s medical services cater to its users, considering the resources available, becomes a real challenge, given the different variables that affect patient care, but which together determine the hospital’s efficiency.2 Frenk and Murray define efficiency as "the degree to which the desired results are achieved with the available resources".4 The WHO identifies three causes of inefficiency in health services that directly involve hospital services: hospital admissions, inappropriate length of stay, and the underutilization of available resources.5 As the bed is the base hospital structure,6 the analysis of hospital indicators that measure the volume and use of the bed allows us to evaluate specific aspects of efficiency, providing valuable information on the services a hospital provides. In this evaluation of hospital efficiency, we will consider two strategic indicators outlined in the Instituto Mexicano del Seguro Social’s (IMSS) 2013 sourcebook: Average number of days per stay in second-level units (Days), percentage of hospital occupancy in second-level units (PO),7 and three indicators used by the Secretaria de Salud: Bed Rotation Index (BRI); Interval of Bed Replacement (IBR), and the index of hospital beds per 1000 patients (Table I). The aim of this study is to evaluate hospital efficiency in a secondary hospital using indicators that measure the use of the bed as a resource.

Considering the sources, the design of this study is ecologically exploratory, using the hospital bed as the unit of analysis. The statistical reports from the Hospital General con Medicina Familiar 1 Tapachula (HGZMF 1) dating from July 2012 to June 2013, obtained from the Medical Information Operating System (MOIS), were examined, including variables such as patients discharged, patient stay, occupancy rate, and average duration of stay by specialty and division; proceeding then to obtain the results of the indicators based on the mechanics of calculation, as noted in IMSS’s 2013 Methodology Manual of Medical Indicators and the Secretaria de Salud in Mexico’s 2011 Handbook of Indicators for Evaluation of Hospital Services. The indicators used were: average number of days spent in second-level units, hospital occupancy percentage in second-level units, Bed Rotation Index and Interval of Bed Replacement, and to assess the potential demand for medical care, the index of countable beds. To measure hospital efficiency, the variation that exists between these indicators was related and analyzed, considering the parameters and benchmarks for each indicator (Table II). Four levels of efficiency are proposed:

Level of impaired efficiency: when a bed remains unoccupied many days it shows poor productivity due to an excess or deficit of patients discharged and, as the average number of days spent and the occupancy percentage are sensitive to these changes, we find that services are underutilized or over-utilized.

Low level of efficiency: when a hospital bed has low productivity due to the lengthening of the average time between the admittance and discharge of patients, which indicates a low occupation and a rise in average hospital stay, affecting in turn the number of hospital discharges.

Average efficiency level: hospital discharges have increased, showing adequate productivity of the bed, however the IBR is negative reflecting the fact that there are more patients than beds, so that the occupation and the average hospital stay have also increased.

Optimum level of efficiency: the resource of the hospital bed is properly exploited, demonstrating adequate supply and demand for services.

Addressing hospital efficiency from the perspective of bed resources, without consideration for other dimensions such as structure, process and outcome,8-10 from the perspective of quality health services, this may be the study’s greatest limitation, however, in compliance with current policies in which decisions must be based on the strategic analysis, the study indicates important areas of opportunity for intervention. Another important limitation is the difficulty of making inferences from the results of this study to other hospital units, given the infrastructure available to each medical unit and the demand for medical care, in this case the use of the indicators proposed here would useful.

The HGZMF 1 Tapachula is composed of 25 medical services in four divisions, it has 133 beds and serves 141,870 users. The overall result of the five indicators indicate optimum efficiency, sufficient hospitalization service and adequate reserve capacity in beds 18.7% (Figure 1). The index is 0.94 beds per 1,000 users, with a surplus of 20 beds. These results contrast with the observable saturation of the services available to the medical unit. According to the assumptions made in this study in order to evaluate hospital efficiency, the Pediatrics and Internal Medicine divisions show an average level of efficiency, which highlights the lack of beds for patient care, and registers more discharges than expected. The Surgery division had level low efficiency, with underutilization of beds by 24%, resulting from a high productivity per bed which is then left unoccupied for periods of time. It appears that surgery patients are treated in the beds belonging to other services that have less demand, which prevents the operating collapse of these divisions; the high number of days of hospitalization in these services requires the review of protocols of care for these patients. The Gynecology division has a deteriorated level of efficiency; an average hospital stay of 2.2 days is registered, and more than its capacity of patients installed in beds. An analysis of services reveals impaired efficiency in eleven services, of these six (Hematology, Nephrology, Neonatology, Neurosurgery, Neurology, Pediatrics and Internal Medicine) present overcrowding, an insufficient number of beds, and fewer beds per day available than patients per day (Table III). 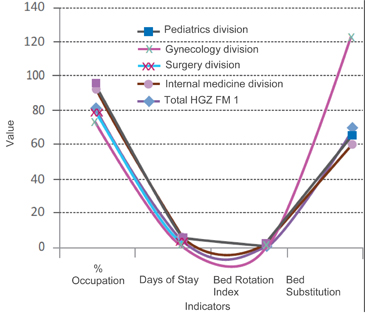 The reasons for healthcare services were also reviewed, and an important phenomenon was identified that might be aggravating the unavailability of beds in services; in the first half of 2013, the reasons for healthcare services in hematology were compatible with hospital management by isolation techniques. The medical unit lacks specific rooms for isolation, and when these cases arise the patient is accommodated in a ward, leaving the rest of the beds located in the room inaccessible. This situation is also observed with patients with infectious diseases.

Efficiency can be measured in existing levels of idle capacity or when the structure of resources reflects excesses or shortfalls in certain areas. The analysis of the indicators used contrasts sharply with what was observed by division and service. The HGZMF 1 Tapachula actively participates within the framework of the agreements of exchange of services in the health sector, laying the foundations for an integrated health system in which the population has universal access to quality services,1,11 due to which it is guaranteed to have an infrastructure based on its needs. One of the causes of inefficiency in hospital services referred to in the literature is the inappropriate size of some facilities,12 which Carreño confirms, noting that the number of installed beds in an institution positively determines the results of the indications.13 In our study we observed some services with high demand and exceeded capacity, and some services with low demand for care and underutilized capacity, which will likely prevent the collapse of services with higher demand by offering its underutilized installations. Services with indicators that point to the unexpected extended stay of patients were identified, a condition that is also reflected in the IBR indicating slowness in the reoccupation of a bed after a patient is discharged. This situation is probably due to the complexity of the conditions that are addressed in health services, derived from the current burden of disease on the population,14 however, it opens a window of opportunity for a review of the protocols of healthcare under which patients are cared for, among other conditions. The bed index, which only considers potential users within a service area, reveals that the medical unit has a surplus of 20 beds, which contrasts with the observed saturation of services and suggests that patients from other areas of service may be in this unit. The underutilization observed in some services allows for the opening of lines of operational research to determine if there is demand for these services or, if not, provides the opportunity to use their beds. In recent years, strategies to reduce hospital costs have been based on the reduction of hospital beds, decreased stays, and reducing the number of admissions,15-19 therefore alternative proposals to this problem are: physical reorganization of services and adjusting the indicator by type of patients seen in the services through a patient classification system, such as groups with related diagnosis.20 The new management tools should be aimed at trying to predict occupancy levels of beds in order to make more efficient use of them while excess capacity is removed.21-24

The efficiency of HGZMF 1 based on bed resources is seriously compromised, immediate intervention is necessary for the hospital to be able to meet its user population’s demand for medical care. The provision of more beds in service, redefining the area of ​​services, and a revision of health care protocols are some useful strategies to strengthen the medical unit.