Background: Psychosocial profile disturbances are the basis of personality disorders, which are frequent in México. Thus, the objective of this study was to determine if the family support perception is associated with the psychosocial profile in adults.

Methods: A total of 450 men and non-pregnant women aged 18 to 60 years were enrolled in a population-based cross-sectional study. According psychosocial profile individuals were allocated into groups altered and unaltered. The presences of psychiatric illness, renal, hepatic, and cardiovascular disease, malignancy or any kind of disability were exclusion criteria. The family support perception was determined by family APGAR and the psychosocial profile using the Dr. Víctor Chávez test. A logistic regression analysis was used to compute the association between family support perception and psychosocial profile.

Conclusions: Both, moderate and high family dysfunctions are associated with altered psychosocial profile in adults.

People suffering from psychosocial profile disturbances are at a greater risk for psychiatric disorders such as those of personality and the reduction of their functionality and quality of life, with the possibility of resorting to suicide.1-3 These disorders affect 10% of men and 20% of women at some point in their lives, and the depressive type is the most frequent, present in up to 60% of cases of suicide.4,5

Psychosocial profile alterations are the basis of personality disorders which in Mexico are present with a prevalence of 11.9% in women and 3.8% in men.6,7

The functionality of the family is a determining factor in the maintenance of health or the occurrence of disease among its members. According to the fulfillment or otherwise of the functions of the family, they are classified as a functional or dysfunctional family, based on the understanding of family functionality as the system's ability to face and overcome each of the stages of the life cycle and crises that may occur therein.8

It is reported that the type of family that has the highest degree of family dysfunction, poor communication and harmony, frequent experience of crisis and lack of organization also has the greatest probability of including a family member with impaired personality.9

By extension, the family constitutes an individual’s primary social support network throughout his or her life, thus this body has a protective function in the face of everyday life’s problems. The support offered by the family is the main source of the promotion of health and prevention of illness and injury, as well as of the efficacy the individual feels and perceives against all adversities and changes that occur throughout the life cycle in the social context.10 To continue, the perception of family support provides a way to view family functionally through a member’s satisfaction with the family atmosphere and his or her perception its functionality.11,12 The family, as a social unit that links the individual to the community, becomes a factor that can positively or negatively affect the process of Health-Sickness.13 Thus, the illness of a family member changes the entire family dynamic. In this regard, it was reported previously that families who have some degree of family dysfunction have a high incidence of chronic disease patients with poor disease control.14 Therefore, it is of great importance that the primary care physician assess the psychosocial environment of the patient, identify the risks that might be affecting the family and could indicate the appearance of personality disorders, which would result in a higher quality of life for the patient and family harmony. Thus, the overall objective of this study was to determine whether the perception of family support is associated with the psychosocial profile in adults. The specific objectives were to identify the type of personality, family type and family life cycle.

With the approval of the protocol by the Local Research and Ethics Committee of the Instituto Mexicano del Seguro Social (project number R-2012-901-12) in Durango, and after getting the letter of written informed consent for all participants, a cross-sectional study was conducted.

Seemingly healthy men and women who were not pregnant, between the ages of 18 and 60, and who visited the outpatient service of family medicine at the Unidad de Medicina Familiar 44 of the Instituto Mexicano del Seguro Social in Durango were invited to participate in the study.

The presence of any psychiatric, renal, liver disease, diabetes, cardiovascular, neoplasm or disabilities were criteria for exclusion.

The results were expressed as measures of central tendency and dispersion (according to the distribution of the sample).

Differences between groups for numeric variables were estimated using the Student’s t test for independent samples (Mann Whitney test for the nonparametric distribution of variables), and for qualitative variables they were estimated with the chi squared test (Fisher's exact test). The association between the perception of family support (independent variable) and the psychosocial profile (dependent variable) was determined using a logistic regression analysis. A p-value of <0.05 and a confidence interval of 95% were used to define statistical significance. Data were analyzed in the statistical packet SPSS, version 15.0. 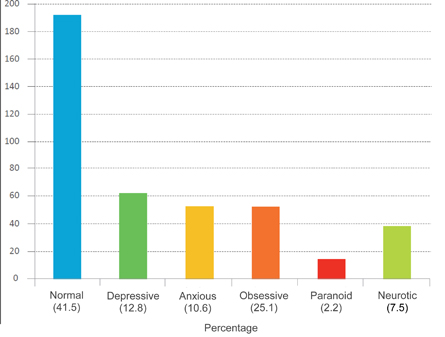 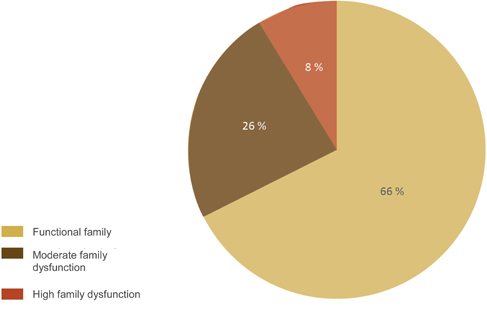 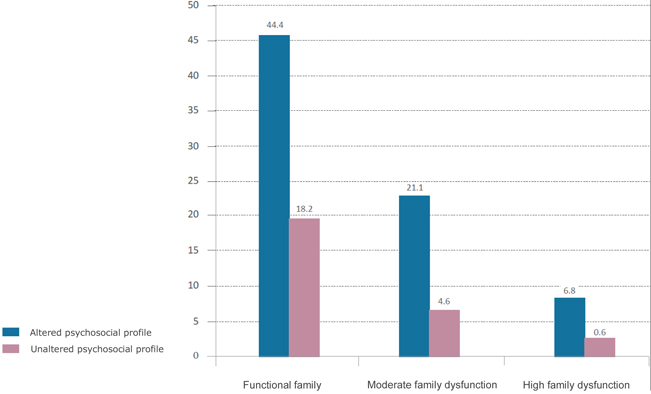 Figure 3 Psychosocial profile according to the perception of family support

According to personality structure, depressed, anxious, obsessive and neurotic individuals were more frequently found in a functional family. Only the paranoid type was most common in families with moderate family dysfunction (Table II).

Compared with previous studies at the national level, a greater prevalence of personality disorders is reported in men than in women, being 20 and 10% respectively,5 similar to what was reported in our study’s results. This finding could be explained by the frequent comorbidity of these disorders with alcohol abuse, which is higher in men compared to women. Another explanation could be related to job stress, given that in our population a higher proportion of men than women work. While both alcohol and work stress have increased in women’s lives, they still remain more common in the lives of men.

In addition, we found that the most frequent structure was that of the obsessive personality type, contrary to national statistics that refer to the depressive type as the most prevalent.7 Although the causes of personality disorders are unknown, it is proposed that both genetic and environmental factors play important roles in their development. Therefore, these features could affect the results in the target population of our study which contrasted with those reported nationally.

To our knowledge, there are no previous studies where the association between psychosocial profile and perception of family support is analyzed. Therefore, as the psychosocial profile has a significant impact on human behavior, alteration could affect family functioning, which is very important because through its various functions (economic, biological, educational and the meeting of needs) values, beliefs, knowledge, and judgment criteria are developed, which have impact on an individual’s health and on the heath of the society they form a part of.8,17 In this regard, there is currently a high incidence of families with moderate and high dysfunction, probably caused by different environmental and social factors affecting stress; by extension, the implementation of strategies that allow us to identify dysfunctional families early and thus provide timely care that results in higher quality of life would be of great help.

Unfortunately, the study of the family and its characteristics as an element which is actively involved in health8 is an issue that usually does not receive the attention it needs, and therefore there is no systematic prevention management by professional in charge of primary care. Therefore, first-class physicians should identify not only the most prevalent diseases, but also the personality type of patients and their families. Therefore, knowledge of family structure and functionality as well as the quality of life perceived by members of the family are tools that should be incorporated and used in a systematic way by primary care teams to reorient their interventions with the goal of improving the health of the population.14

An alternative could be based on the implementation of family psychological family intervention, which would help families and their members to confront the changes that could destabilize them from both inside and outside, promoting greater strength and resistance to the presence of any disease. This intervention would also promote the use of psychological resources to negative situations that may arise at different stages of the family life cycle, developing better familial health.18

On the other hand, the strength of this study was the appropriate sample size which confers the power of proper statistical analysis.

In conclusion, the findings of this study suggest that both moderate and high family dysfunction are associated with an altered psychosocial profile.