The situs inversus totalis is a rare condition associated with multiple congenital malformations, the most common heart defects and is associated with more complex syndromes such as Kartagener. Most of the time, the defect is found after a physical examination for other reason. We reported the case of a patient diagnosed on the first day of extra uterine life. It has been the first case reported in the state of Guerrero, with several prenatal history of interest. Our aim is to emphasize that early diagnosis completely changes the future healthcare. Reviewing the literature, it does not have any algorithm on searching protocol of congenital malformations and management attention on common pathologies.

Situs inversus totalis is a rare congenital entity described in animals since the time of Aristotle. In Mexico, the first case reported is attributed to the surgeon Domingo Russi, who in 1760 reported in detail the autopsy of the Viceroy, Marqués de las Amarillas, coinciding with findings of situs inversus: "The liver appeared in sight on the left side of the belly and of an extraordinary size, as in the great lobe occupying the upper quadrant of the whole side".1

In a recent case-control study with reports from 1998 to 2007 it was found that the prevalence of defects in laterality is 1.1 per 10,000 born alive, yet the prevalence of situs inversus totalis was estimated at 3 per 100 000 live births. Similarly it was found that the SIT (situs inversus totalis) was significantly more common, associated with other conditions such as preterm birth, mother of Black or Hispanic ancestry, and maternal age less than 20 years.2

In the state of Guerrero we do not have any report about this clinical entity, hence the importance of early diagnosis from first contact, since it not only significantly impacts subsequent patient care, but also the early search for any associated complications.

A case was reported of a newborn female patient, obtained by cesarean because of failed induced labor and premature rupture of membranes of more than 24 hours duration. During surgery, caesarean was performed on the mother upon finding multiple veins in the uterine segment, surgical procedure complicated by obstetric hemorrhage, hemorrhage quantified at 1600 mL.

Prenatal care was initiated from week 8 of gestation presenting three episodes of threatened miscarriage that abated after administration of prostaglandin inhibitor through week 17, where cervical cerclage was performed finding: cradled cervix 1.5 cm long dehiscent at 1 finger. Similarly, from week 20 of gestation to term, preterm labor was threatened 4 times, meriting hospitalization each time.

During post-cesarean care, she was found stable, with vital signs within normal parameters, heart was auscultated, predominantly in central chest, it was decided to admit her to the pathological nursery diagnosed as potentially infected, double therapy of antibiotics was initiated. Paraclinical reporting was done on blood biometry: leukocytes: 16,200, neutrophils: 33.8%, lymphocytes: 54.7%, monocytes: 5.15% eosinophils: 2.94%, basophils: 3.38%, hemoglobin: 14.5 g / dL, hematocrit 41.6%, platelets: 342,000.

During her stay in the nursery, the patient was constantly examined, finding upon auscultation heartbeat sounds clearly in the right chest, for which a defect in laterality is suspected; thorax and abdominal radiography is requested in which cardiac silhouette and mediastinal content are found occupying right chest, and liver silhouette on the left and gastric chamber on the right (Figure 1). Abdominal USG is requested that confirms the diagnosis, reporting a mirror image. 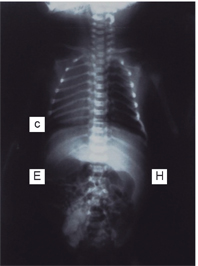 
During the following days of hospital stay, the patient had adequate response to established treatment, which was initiated orally and was adequately tolerated, vital signs were stable and within normal parameters. Her discharge was allowed with monitoring in outpatient service.

Follow-up was done on the case for 5 months, during which there have been studies of extension. We did echocardiography at 4 months of age, which reported in the abdomen: aorta to the right, cava on the left, apex on the right, atrium morphologically right receiving both cavas situated spatially on the left, atrium morphologically left spatially located on the right with arrival of four pulmonary veins, full interatrial septum, atrioventricular connection concordant with situs inversus, ventricle morphologically right in left posterior spatial situation, both ventricles with their respective valves, from the right ventricle emerges the pulmonary artery in anterior position and right pulmonary valve, ventricle-artery connection consistent with left ventricle emerging in situation posterior and left aorta consistent with atrial and ventricular situs inversus, dextrocardia dextro apex with mirror image of heart: structurally normal. 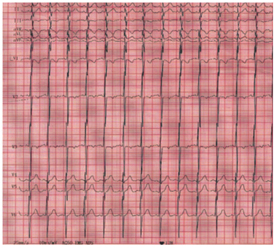 Figure 2 Left electrocardiogram showing: 128 bpm heart rate; sinus rhythm; cardiac axis substantially shifted to the right, approximately 180 °. With inversion of the usual morphology of the complexes in DI and AvR 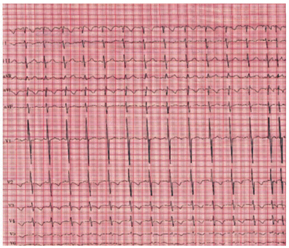 
Today we find the patient asymptomatic, she began weaning at 4 months with adequate tolerance, 75th percentile for height and 90th percentile for weight, psychomotor and social development corresponding to 6 months old according to Denver scale.

Situs inversus totalis is an alteration in the formation of the organs established by the embryological development in the gastrulation stage, i.e. less than 21 days after implantation.3

This relates to more than 500 genes with the formation of the heart and vascular system, and 24 genes involved in the left-right asymmetry. In 1998 the Pitx2c transcription factor was discovered, which acts on the left lateral mesoderm, responsible for the creation of the left-right axis, the asymmetric development of the heart, lungs, spleen, bowel torsion and the stomach.4 Since the primitive streak appears, fibroblast growth factor 8 (FGF-8), which is secreted by cells of the node and the primitive streak, induces the expression of Nodal (member of the gene family of growth factor beta) which, together with Lefty2, controls cranial expression of Pitx2 which controls morphology of left visceral organs. When Pitx2 is removed, the irregular morphogenesis of organs leads to asymmetrical development of the left side of some visceral organs, such as the spleen and liver.

Situs inversus has been associated with multiple birth defects associated alone or bundled into syndromes.

Kartagener syndrome (bronchiectasis, sinusitis and situs inversus) affects 20% of patients with situs inversus; however, only 50% of patients with the syndrome have situs inversus.5 Other defects to highlight are cardiac malformations such as dextrocardia and transposition of major arteries, which occurs in 5-10% of cases,6 it is worth mentioning that those are the malformations most commonly associated with SIT, however, within the cardiac defects, abnormalities in the origin of cardiac irrigation are also found.7 It has also been found that the pattern of the myofibrils in the left ventricle of SIT patients is normal in vertex, but is reversed at the base and of greater length; despite the differences in structure, the pump function and performance are the same as in people with levocardia.8 Other associated defects are: in their abdominal organs, duodenal atresia is the main abdominal defect found in multiple studies, most likely due to lack of development after intestinal malrotation,9 asplenia and polysplenia,10 ectopic kidney, cases associated with unilateral microtia and azoospermia in men and decreased fertility in women,11 which are related to the pathophysiology of Kartagener syndrome.

Situs inversus not only represents the risk of multiple birth defects associated, it is in itself a challenge to diagnosing common diseases; the pathology most frequently reported is acute appendicitis, although its clinical manifestations are florid in most cases, there are other pathologies in which it would not be impossible to conduct a proper therapeutic management, as in the case of CPR. In literature, only one case has been reported of CPR in situs inversus previously undiagnosed, this with the help of echocardiography in the emergency room,12 but this resource is not common in the emergency department, so history and early diagnosis are essential.

We conclude that the situs inversus totalis is a rare entity whose early diagnosis benefits care significantly.

Given the large number of associated congenital cardiac malformations, the deliberate search for possible conditions through an echocardiogram is mandatory; the rest of the search for associated malformations should be made depending on symptoms and clinical findings due to having low incidence.

There are no action algorithms for care for disorders in patients with SIT, from CPR guidelines to surgical protocols. Greater notice of this condition is required to create complete algorithms for the intentional search for associated malformations.