Background: In 2009 it was introduced a new diagnostic criteria based on hemoglobin A1c (HbA1c) ≥ 6.5 % in the adult population; some studies suggest that the cutoff may be smaller in pediatric population. The objective was to determine the utility of HbA1c ≥ 6.5 % as a diagnostic test for DM in Mexican adolescents with overweight or obesity.

Conclusions: The level of HbA1c ≥ 6.5 % had low sensitivity and specificity for the diagnosis of DM. A lower cutoff point is insufficient to use HbA1c as a diagnostic criterion. These results are consistent with the ones of other journals.

The incidence and prevalence of diabetes mellitus type 2 (DM2) has increased quickly across the world, in particular in children and adolescents. This increase has been attributed partly to the increase of excess weight and obesity in this population, both in the United States and every part of the world.1-3

In 2006, according to the results of the Encuesta Nacional de Salud y Nutrición (ENSANUT), one in three adolescent men or women had excess weight or obesity, representing about 5,757,400 adolescents in the country.4 The early appearance of DM2 brings with it the premature development of both microvascular and macrovascular chronic complications. These lead to major mortality by cardiovascular, cerebrovascular, and peripheral vascular disease.5,6

DM2 is usually asymptomatic and the risk factors for its development include excess weight or obesity and genetic burden. Other data that promote this risk through increased insulin resistance are central obesity, systemic arterial hypertension, dyslipidemias, polycystic ovarian syndrome, and puberty. The American Diabetes Association (ADA) recommends screening for DM2 diagnosis with fasting plasma glucose in children with body mass index (BMI) ≥ 85 percentile and those who also have two additional risk factors, for example: family DM history in the first or second degree, belonging to a high-risk ethnic group (American Indian, African American, Latino, and Asian), and data of insulin resistance or associated conditions.1,7

DM diagnosis is established with criteria based on levels of fasting plasma glucose ≥ 126 mg/dL on two occasions, plasma glucose ≥ 200 mg/dL at any hour in the presence of symptoms, and, if an oral glucose tolerance curve (OGTC) is made and two hours later venous glucose is ≥ 200 mg/dL, this diagnosis is then confirmed. In 2009, an international committee of experts, which included representatives from the ADA, the International Diabetes Federation (IDF), and the European Association for the Study of the Diabetes (EASD), recommended the use of glycosylated hemoglobin (HbA1c) for DM diagnosis with a cutoff point of ≥ 6.5%. The ADA adopted this criterion in 2010,8 but OGTC is still considered the gold standard for DM diagnosis.9,10

HbA1c provides advantages in the diagnosis of DM2 because it does not require fasting, reflects average glucose for 3 to 4 months, has lower intra-individual variability, and can predict complications related to DM.11,12,13 Its disadvantages are due to the variability observed in different ethnic and age groups, genders, and disease processes that produce anemia and hemoglobinopathies.8,11,14-18

Multiple studies in different groups around the world have suggested that the HbA1c cutoff at ≥ 6.5% for DM diagnosis could be between 5.6 and 7.0%. Specifically in the pediatric population, Lee et al.19 included 1156 overweight adolescents between 12 and 18 years and 6751 adults between 19 and 79 years from different ethnic groups (with Mexican-Americans included in the group) and concluded that the recommended HbA1c cutoff point of 6.5% was not a good predictor of DM in adolescents as compared to adults, although it should be noted that these patients did not undergo OGTC, only fasting venous glucose. As for diagnosis of prediabetes in adolescents, an HbA1c level of 6.0% had a sensitivity of 0.0% and specificity of 99.6%, a positive predictive value (PPV) of 0%, and a negative predictive value (NPV) of 92.5%, while in adults the values ​​were 13.2, 93, 25.4, and 85.5%, respectively.

There are two other important studies in the pediatric population. Nowika et al. determined by using OGTC and HbA1c in 1156 obese adolescents, including 29% of Latino origin, low sensitivity and specificity using a cutoff of 6.5% for this population and variations by ethnic group, with higher values ​​in African Americans, lower in Caucasians, and intermediate levels for Latinos (5.38 ± 0.38%). The authors suggest a cutoff of HbA1c of 5.8u% generally for this population, as its specificity was 87.6% and sensitivity 67.7% altogether.14 Eldeirawi et al.15 studied 4928 children, 34.4% of them Mexican-Americans, and suggest that HbA1c was positively correlated with age and BMI, although the HbA1c cutoff found was higher in the group of Caucasians (5.17%) and similar to that of African Americans (5.03%) compared with Mexican-Americans (4.97%).

As such it can be concluded with these studies that the HbA1c cutoff of ≥ 6.5%, internationally recommended for the diagnosis of DM, shows different sensitivity/specificity in different age, gender, and even ethnic groups. In Latinos it has been suggested that HbA1c cutoff could be lower than recommended.

This has led to suggestions that until a more specific cutoff for certain groups is established, the determination of HbA1c as the initial test is an additional tool, but not sufficient to obviate the determination of fasting venous plasma glucose or OGTC20 for the DM diagnosis process in this population.

Thanks to this and the limited information that exists in our population, we decided to conduct this study, which aims to determine the usefulness of ≥ 6.5% glycosylated hemoglobin as a diagnostic test for diabetes mellitus in overweight or obese Mexican adolescents when compared with oral glucose tolerance curve.

The study was conducted at the Servicio de Endocrinología Pediátrica of the Hospital de Pediatría of the Centro Médico Nacional Siglo XXI, part of the Instituto Mexicano del Seguro Social. This was a diagnostic test whose study population was patients 10-16 years of age with a diagnosis of overweight or obesity (BMI ≥ 85%, according to the norm tables of the Centers for Disease Control and Prevention). It excluded patients with infectious diseases, chronic kidney failure, liver disease, or who were using any medications (such as steroids, chemotherapy, or disease-modifying drugs) that increase the risk of hyperglycemia.

Patients were identified who met the inclusion criteria, and they were given complete anthropometric assessment, blood pressure measurement, assessment of pubertal stage according to the Tanner scale, and blood sampling after fasting 12 hours for plasma glucose, HbA1c, and OGTC with an oral load of anhydrous glucose at doses of 1.75 g/kg with a maximum of 75 g to determine central venous glucose two hours after dosing. Plasma glucose was processed by enzymatic colorimetric test, using a commercial GLU kit, Cobas TM-brand glucose GOD-PAP from Roche/Hitachi, and HbA1c was processed by turbidimetric immunoassay using the commercial kit HBA1C II Tina -quant, standardized by the International Federation of Clinical Chemistry.

Statistical analysis determined the sensitivity, specificity, PPV, and NPV of HbA1c as a diagnostic test in comparison with the gold standard, which is OGTC. ROC curve was used to determine the best cutoff for glycosylated hemoglobin, and the likelihood ratio was calculated for each cutoff point.

Regarding ethics, evaluation of the research protocol was applied to the Comité Nacional de Investigación Científica and it was approved with the registration number 2013-785-015.

The positive likelihood ratios for both the HbA1c cutoff ≥ 6.5% and the best cutoff of 5.45%, determined with ROC curve in our sample with a CI of 95%, are shown in Figures 1 and 2. 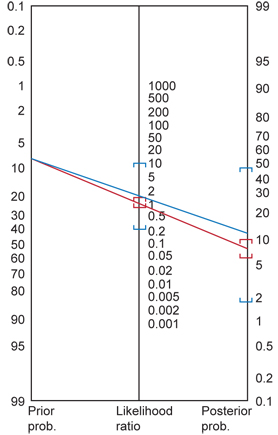 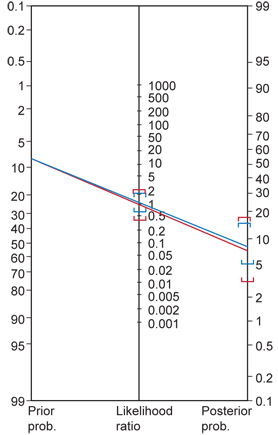 
In the sample, the frequency of intolerance diagnosed by OGTC was 7.33% (eight patients); however, if only HbA1c between 5.7 and 6.4% was taken for the diagnosis, the prevalence increased to 24%, corresponding to 27 patients, two of whom were diabetic according to OGTC. The best HbA1c cutoff for diagnosis of impaired glucose tolerance was also estimated by ROC curve.

Currently HbA1c determination as a diagnostic criteria for DM offers the advantages of being a single determination, non-fasting, which is not altered by acute pathological processes, with low intra-individual variability, and an already standardized measurement technique with little inter and intra-assay variability, without interference from elevation of other biochemical parameters such as lipid profile. However, even though international population studies have shown a wide variation in the cutoff recommended by the ADA for the diagnosis of DM, they made no specific indications for the pediatric population.1,9 The proposal to use HbA1c determination alone as a diagnostic criterion has not been consistently supported by several studies, whether in the adult or pediatric population.

In the present study we investigated the usefulness of HbA1c with the cutoff recommended by the ADA for a sample of the high-risk pediatric population, which presented family history, overweight or obesity, et cetera. Under these conditions, the frequency found for impaired fasting glucose or glucose intolerance was 16%, and DM2 8.3%. These figures are higher than those reported in the international literature on adolescent patients with metabolic syndrome. This finding could also be attributed to the genetic burden brought by Amerindian genes. However, only 22.2% of cases had altered HbA1c, supporting the need for other diagnostic criteria to correctly identify DM in these adolescents. While the frequency of false positives was 3%, the diagnosis of DM demands of the subject not only changes in lifestyle, which are indicated per se in all cases overweight or obesity; nonetheless, the psychological impact of a diagnosis of chronic degenerative disease can bring serious consequences.

The low sensitivity, specificity, and area under the ROC curve for a cutoff of HbA1c equal to or greater than 6.5% found in this study is similar to that reported in the literature whose studies include adolescents, and which suggest that this cutoff could be lower in this population.14-16

While the sample size is limited, our results are consistent with other studies conducted around the world, such as that reported by Nowika et al., which included 29% Latino adolescents, and which suggests a cutoff of 5.8% for the diagnosis of type 2 diabetes, with a sensitivity of 67.7% and a specificity of 87.6%.14 Another study by Eldeirawi et al., in 4928 children, 34.4% of whom were Mexican-American, suggests that the value of HbA1c positively correlated with age and BMI, with a cutoff for DM diagnosis between 4.97 and 5.03%.15 We found that a cutoff lower than 5.45% improves the sensitivity and makes it closer to the desirable minimum, with the best possible specificity (sensitivity 62.5% and specificity of 57.1%), but still HbA1c determination does not seem to be enough to be used as the sole diagnostic criterion for diabetes mellitus. Although it has been suggested that the cutoff may differ with regard to ethnicity, one cannot rule out that the differences in sensitivity and specificity of different cutoff values ​​are due to the size and characteristics of the study sample. These same limitations may influence the lack of correlation found between HbA1c levels and early or late pubertal status.

The values ​​suggested by the ADA for the diagnosis of prediabetes (abnormal fasting glucose or impaired glucose tolerance) of 5.7-6.4% showed better sensitivity, but, as with DM, they over-diagnosed 6% of cases. The statistical practice with the construction of ROC curve for the diagnosis of prediabetes suggested a cutoff lower than recommended (5.35%), with a sensitivity of 80.5%, a specificity of 32.5%, but with an area under the curve still insufficient (0.614).

The ROC curve in which HbA1c was assessed as a predictor of DM in adolescents was based on a limited number of subjects; therefore, an analysis with a larger number of adolescents with DM is necessary before making any recommendations about the best HbA1c cutoff to diagnose diabetes. However, based on studies suggesting that HbA1c increases with age, we consider necessary the investigation of a lower cut point for this population.

With the limitations of the study mentioned above, our results suggest that the cutoff for our population of obese Latino adolescents at high risk for disorders in carbohydrate metabolism is lower than that recommended by the ADA and, since the test appears to be more specific than sensitive, it could be considered as a screening test in the diagnostic process of diabetes mellitus.

In this study we do not demonstrate that HbA1c is a diagnostic test for diabetes mellitus in this population.