Background: Lactate is one of the most useful biomarkers to screen patients with shock; therefore, the aim of this study was to establish the levels of lactate regarding the pulse pressure in that sort of patients.

Methods: Observational, retrospective, cross-sectional and descriptive study of patients over 18 years diagnosed with shock from an emergency room of a tertiary care hospital. Lactate levels and pulse pressure were used as biomarkers. We used descriptive statistics, Student’s t test and Pearson correlation coefficient.

Conclusions: Even when several studies emphasize the clinical significance of biomarkers in the diagnosis and management of patients with hypovolemic shock, it is necessary to do more studies in order to find the efficacy of the non-invasive screening in this type of pathology.

Shock is a clinical entity with broad implications for the care of critically ill patients. It is defined by inadequate tissue perfusion leading to an imbalance between oxygen demand and supply, as well as other nutrients, which affects metabolic dysfunction at the cellular level, organ failure, and death, regardless of etiology.1 The pathophysiological mechanisms of shock are conditioned by the loss of intravascular volume, initially resulting in a systemic response mediated by vascular changes and alterations to the neuroendocrine system. If the clinical situation in the patient persists, there are responses in various systems, including cardiovascular, neuroendocrine, inflammatory, and immune responses. This will result in various abnormalities at the cellular level.2

The cause of the state of shock can be varied; classifications have been proposed based on the pathophysiology of each one: hypovolemic shock, distributive shock, cardiogenic shock, and obstructive shock.

Hypovolemic shock is a condition caused by rapid and significant loss of intravascular volume, which can then lead to hemodynamic instability, decreased tissue perfusion, cellular hypoxia, organ damage, and death.2 Depending on the extent of the injury and compensatory mechanisms, the response at the cellular level may be adaptation, dysfunction, and injury or death; changes in tissue microcirculation also occur, which may contribute to organ dysfunction and the development of systemic sequelae from severe hypoperfusion.4

Tisherman et al. designed recommendations for the use of so-called end points. For this, they evaluated levels of lactate and base deficit in the resuscitation of patients in shock. Those described include base excess, lactate level, and gastric pH as fundamental parameters to monitor and thereby guide the course of resuscitation with liquids.5 Tissue oxygen and carbon dioxide levels can also help identify patients who require additional resuscitation and are at risk of multiple organ dysfunction syndrome; therefore, current trends focus on the standardization of parameters given preference in the first six hours after the shock event.3

The doctor in the emergency room diagnoses and manages patients in critical condition, and one of the essential components of this work is the comprehensive monitoring of these patients through a variety of both invasive and non-invasive modes. These methods are mainly used to detect the magnitude of hemodynamic compromise, initiate treatment, and monitor response to established treatments.6,7 Blood pressure monitoring is a cornerstone to maintain adequate perfusion to the organs, and it can be determined by two methods: non-invasive and invasive. The first is the most used, using a sphygmomanometer to auscultate Korotkoff sounds; the second involves the placement of an arterial catheter, but it is not a routine procedure.8,9 Despite the various methods established for monitoring patients in shock, currently the focus has been aimed at assessing microcirculation through global and regional markers of tissue hypoxia. Among the most marked is serum lactate, which provides information on anaerobic metabolism. Its normal blood value is less than 2 mmol/L; however, lactate levels above 4 mmol/L have been strongly associated with a worse prognosis. Several authors have argued that maintaining high levels of this marker for more than 48 hours carries a high risk of infection, mortality, organ dysfunction, and death.

Pulse pressure as a monitor is defined as the difference between systolic blood pressure (SBP) and diastolic blood pressure (DBP), expressed in mmHg; it is considered an indicator of arterial distensibility. Pulse pressure is considered abnormally low if it is less than 25% of the systolic value. Although it is not currently possible to define normal pulse pressure, different population studies have shown that pulse pressure > 65 mmHg is associated with increased cardiovascular morbidity and mortality, which is an independent marker of cardiovascular risk. Pulse pressure is related to blood pressure levels; in hypovolemic shock, both are diminished, and they are a characteristic clinical parameter of this state. Finally, persistent hypotension increases normal​​ lactate values as a marker of cell lesion in critically ill patients.

This study aims to evaluate and determine the behavior of global tissue perfusion markers (such as serum lactate) in relation to hemodynamic parameters (such as pulse pressure) in patients in shock.

A clinical, observational, retrospective, cross-sectional, descriptive study was conducted in the emergency department of the Hospital de Especialidades 17 “Adolfo Ruiz Cortines” of the Instituto Mexicano del Seguro Social (IMSS) in Veracruz, Mexico, over a period of three months during 2013. Medical records were reviewed for all patients over 18 years old with a diagnosis of hypovolemic shock; serum lactate levels on admission were compared with those six hours later, with pulse pressure figures calculated following the standard management with fluid resuscitation without discriminating use of colloids, crystalloid, or blood products, excluding patients who required management with vasopressors.

This article was subject to the ethical standards of the Helsinki Declaration of 1975, the agreement on the topic issued by the Secretaría de Salud and published in the Diario Oﬁcial de la Federación on Friday, January 4, 2013 (NOM-012-SSA3-2012), and the rules of the IMSS Committee on Human Experimentation and of the aforementioned medical center. The study is registered under number R-2013-3001-44 and was approved by the IMSS Local Committee on Research and Ethics in Health Research number 3001.

Measures of central tendency (mean) and dispersion (standard deviation) were used. Student’s t-test was used to evaluate the differences between continuous variables with normal distribution, and Pearson’s correlation coefficient was applied. SPSS 20 software for statistical analysis was used. 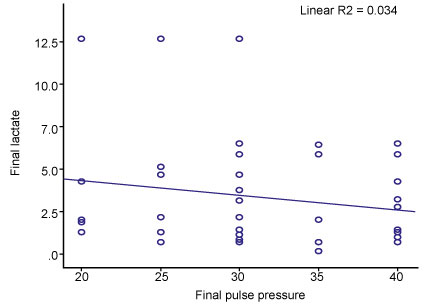 Shock is a clinical entity of significant relevance based on the morbidity and mortality associated with it, and it has become a well-studied disease with various study approaches. In the clinical field, determining the degree of shock and its behavior based on the established management is paramount. For this we have several methods for analysis and qualification of objectives and their management (measurement of serum lactate, base excess, uresis, etc.), as mentioned by Tisherman et al.3 Among these markers the most studied with strong scientific evidence in cases of shock with tissue hypoperfusion is serum lactate, which not only has a level of clear evidence as diagnostic value, but also has a high prognostic value in patients with trauma, as Winters et al. mention in their study.6 In our study, trauma was the leading cause of hypovolemic shock, and one can appreciate that serum lactate levels are used as a marker for fluid correction. According to studies by Cruces et. al.,7 pulse pressure is a reliable static marker of shock and hypoperfusion that may be divergent in the rational use of fluids for volume replacement even if we find high PVC figures and uresis within normal limits with biochemical signs of shock, a thesis that has been proven by Michard.8 Similarly, in our study 96% of patients experienced increased pulse pressure upon volume administration, and 73.9% of these recovered optimal pulse pressure at least 25% of SBP. As for the relationship between lactate and pulse pressure, our study showed an r = -0.187, so there was a negative correlation which translates to an inversely proportional relationship between the two markers, as has Michard8 claimed in his study.

Marik and Baram9 consider a dynamic variable such as the variation of pulse pressure as a marker of shock in patients in intensive care, but the question remains whether the implementation of such a marker is equally effective in patients who are treated in the emergency department.

Although several investigations emphasize the clinical significance of these markers in the diagnosis and management of patients with hypovolemic shock, it is necessary to continue studies to find effective non-invasive monitoring in this type of pathology.