Analysis of the cumulative solar ultraviolet radiation in Mexico

Analysis of the cumulative solar ultraviolet radiation in Mexico


Background: The incidence of skin cancer has increased in Mexico in recent years. Ultraviolet radiation is the main risk factor associated. Due to the need to develop strategies to prevent skin cancer, the aim of the study was to estimate the UV intensity in several representative regions of Mexico, the average annual UV dose of these populations, and the potential benefit of applying sunscreen at different ages.

Methods: The intensity of UV radiation was quantified by remote and terrestrial radiometry. The dose of UV exposure was measured in minimal erythema doses using validated models for face and arms. The benefit of using a sunscreen was calculated with the use of a sunscreen with SPF 15 from birth to age 70.

Results: The UV radiation is lower in December and greater in the period from May to July. The region with a lower annual dose is Tijuana; and the higher annual dose is in the Mexico City area. The annual difference between these regions was 58 %. Through life, a low SPF sunscreen can reduce up to 66 % of the received UV dose.

Conclusions: The geographical location is a risk factor for accumulation of UV radiation in Mexico. Since childhood, people receive high amounts of it; however, most of this dose can be reduced using any commercially available sunscreen, if applied strategically.

Skin exposure to solar ultraviolet radiation (UV) can induce allergic,1 degenerative,2 immune-suppressing,3 and carcinogenic phenomena.4 It is estimated that UV radiation causes 50 to 90% of skin cancers.5,6 In Mexico, the epithelial variants of these tumors are the most common, as basal cell carcinoma accounts for approximately 63%, and squamous 25%.7,8 Although melanoma is less common (10%), most deaths (90%) relate to this type of cancer.7-9 Epidemiological studies show that chronic exposure predominantly induces the development of squamous carcinomas.10 Melanoma is associated with intermittent sun exposure,9 while both acute and cumulative exposure are related to the appearance of basal cell carcinomas.11 In our country, the increase in skin cancer in recent years coincides with sociocultural changes in the use of clothing, times and situations of sun exposure, increased life expectancy, and more timely detection.8,12,13 The progressive increase in incidence, even in young people, emphasizes the need to prevent solar UV radiation.7,8,14 However, information is scarce regarding the amount of environmental radiation, the exposure dose, and dose-response relationship in the occurrence of these neoplasms, since most UV radiation strikes the skin by continuous or intermittent doses (suberythemal) that do not exceed the perceptual threshold (sunburn).13,15,16 Therefore, the intent of this study was to estimate: a) the intensity of UV radiation in representative regions of our country, b) the average dose of chronic UV exposure of these populations, c) the benefit of sunscreen application at different ages, and d) to propose strategies to reduce sun exposure.

The measurement of environmental UV radiation levels took place in the city of San Luis Potosi, Mexico (22° 09' latitude north, 100° 58' longitude west, altitude 1877 m). A meteorological radiometer (Biometer 501, Solar Light, Glenville, Pennsylvania, USA) was used, programmed to make daily recordings from 6 AM to 6 PM at 15 min intervals. The intensity was quantified using the erythemogenic action spectrum.17 This measure observes the capacity of wavelengths of UV radiation to cause sunburn, which also corresponds to carcinogenesis.17,18 80% of the value of this spectrum is determined by lengths of 290 to 320 nm, and 20% by lengths of 321-340 nm.17 The intensity was measured in joules per square meter, which was converted into minimal erythemogenic dose (MED). One MED is equivalent to 21 mJ/cm2, and corresponds to the UV radiation that usually causes a noticeable burn in a Caucasian person with white skin, 24 hours after exposure.15,18

The erythemogenic UV radiation dose was obtained with the Giovanni management system, designed for the study of geoscientific data and information. This tool was developed and is maintained by NASA’s Goddard Space Flight Center (National Aeronautics and Space Administration, Greenbelt, MD, USA).19 The parameters originate from the Aura satellite system, which are valid for scientific use.19,20 The data used corresponded to the city of San Luis Potosi and 10 other representative locations in the country, whose geographic characteristics are described in Table I.

Calculation of the cumulative dose of UV exposure

Individual solar UV radiation exposure was estimated for face and arms by local environmental irradiance. These anatomical regions were chosen because most skin cancers develop there.7,8 The method used was the polynomial regression model for various postures and body areas according to Vernez.16 This equation uses two variables that predict with 98% accuracy the chronic dose of UV radiation received; one is the cosine of the maximum radiation at solar zenith (cosSZA), and the other is the fraction of the sky visible from the anatomic region (70% for face and arms). The exposure fraction (EF) was calculated in upright position using the formula: EF = 3396 * (ln (7) -1,758) + 10,714 * 7-5.8 + 9,199 * (cosSZA3-0.315) + 56,991.

The cumulative dose for the eleven cities was estimated considering an hour of daily sun exposure, since studies in Mexico show that about one third of the population remains outside during this interval.12,13,15


Calculation of the benefit of using photoprotection

The sun protection factor (SPF) defines the relationship of the UV dose required to produce a MED on protected skin to that required to produce it on skin without protection.21-23 Therefore, the SPF value is inversely proportional to the amount UV radiation transmitted to the skin.22,24 However, this relationship is not linear, since SPF 5 transmits 20% and absorbs or reflects 80% of UV radiation, whereas SPF 30 transmits 5% and eliminates 95%.22 Accordingly, there is greater benefit in raising the SPF from 2 to 4 (25% greater protection), than increasing it from 20 to 40 (2.5% increase).24 Since the typical sunscreen user receives one third of the efficacy of the product because of inadequate application,23 the benefit of the photoprotection was calculated for the use of an SPF 15 product, which translates to an SPF of about 5 in terms of use.21,22,25 This protection was projected to 70 years of age, and was compared with unprotected exposure as well as its initiation at each decade of life.

The parameters were subjected to univariate descriptive and correlation analysis. The variation in monthly averages obtained was evaluated by two-way analysis of variance (ANOVA). The confidence level was set at 95% and a p-value equal to or less than 5% ​​is considered significant. The procedure was done using SPSS version 16.0 for Windows (IBM, Armonk, NY, U.S.A.).

The daily dose obtained by terrestrial radiometry was compared with the values provided by NASA satellite ​​for the coordinates of the city of San Luis Potosi. During the observation period, the correlation coefficient was close to unity (r = 0.92, p < 0.001). It was therefore confirmed that the remote measurements are comparable to terrestrial measurements. There was significant variation among UV radiation doses during the year, and between cities (ANOVA, p < 0.001). The minimum UV radiation dose was observed in December at all sites, and the highest during the months from May to July. The city with the lowest annual radiation was Tijuana, and that with the most radiation was Mexico City. These measurements are summarized in Table II.

The average daily MED effectively impacting face and arms differs between months and between cities (ANOVA, p < 0.001). The lowest available annual daytime environmental accumulation is 85 MED for Tijuana, and the highest is 146 MED for Mexico City. The difference between these two cities is 58%. 50% of annual MED accumulates from April to August. These data are presented in Table III. The analysis of personal MED accumulation for an hour of sun exposure during prime irradiation time by decade, showed that the cumulative dose in Tijuana at age 80 was equivalent to the cumulative dose at age 49 in the Mexico City (1224 MED). This information is shown in Table IV.

From birth to age 70, using a sunscreen that provides a protection of 5 before the hour of daily exposure reduces MED from 1421 ± 191 to 284 ± 38 on average for the total of cities analyzed. Therefore, as shown in Figure 1, the application of SPF 10 cuts in half the accumulated MED (142 ± 19). Moreover, under this same scenario, late-applied photoprotection also significantly reduces the accumulated dose; as using SPF 5 starting at age 60 reduces MED received from 1071 to 971, i.e. 9% less than total acquired without photoprotection (ANOVA, p < 0.001). 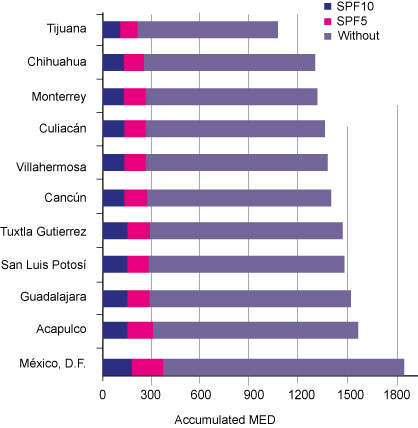 Figure 1 Ultraviolet radiation accumulated by age 70 on face and arms. Accumulation was estimated after one hour of daily sun exposure, expressed in minimal erythemogenic dose (MED). The benefits of sun protection factor (SPF) 5 (20% exposure) and SPF 10 (10% exposure) are shown, in contrast to the lack of protection (100% exposure)

Mexico's population is continuously exposed to the sun's UV radiation starting in childhood.13 The most vulnerable areas of the skin are unprotected areas like face, neck, forearms, and hands.7,8,10 Because most skin cancers are induced by UV radiation, limiting this exposure substantially prevents its appearance.5,6,10 Our study shows that there are differences in solar intensity between the different geographical regions of the country; this means that living in areas with higher solar radiation chronically influences the cumulative dose. For example, Mexico City is the city with the highest annual UV irradiation, in contrast to Tijuana receiving an intensity 47% lower. This is primarily because terrestrial UV radiation is reduced by about 3% per degree north latitude and it increases by 10% every 1000 meters above sea level.26

Although lifestyle and personal habits largely determine this dose, our analysis makes clear that environmental exposure for one hour daily will have greater impact in the center and south of the country, where there is a higher density of inhabitants, and particularly among the population with light skin.15 There is no precise relationship between the cumulative dose and the development of malignancies; however, exposure to the sun for an hour in northern and central localities is very different; for example, the dose accumulated over 40 years in Mexico City is equivalent to that obtained in Tijuana over 70 years. In our environment, constant low-intensity protection (SPF 5) starting in childhood can reduce sun exposure over a person’s life by more than half. Therefore, rather than recommending a sunscreen for its power or other attributes, it is more important to educate the public regarding its chronic benefit, because these sunscreens are often used contingently during intense sun exposure and not continuously due to ignorance of their long-term advantages.12,22,25

Moreover, it is important to recognize that UV doses are relatively uniform from March to November, and half the annual UV dose is received between April and August. Accordingly, photoprotection should still be applied during the winter because, although the intensity is reduced, the months of December and January represent 11% of the annual dose. Our work shows that the daily application of a commercial sunscreen with an SPF equal to or greater than 15, at least once during the time of maximum solar irradiation (midday) is sufficient to attain this goal. However, one must consider that although sunscreen is an efficient resource, combining it with hats and appropriate clothing over exposed areas will significantly increase its benefit.22 Moreover, not only at an early age do preventive measures offer substantial benefits. Initiating photoprotection in the fifth or sixth decade of life can also significantly reduce the cumulative dose. This relatively late intervention can eliminate 19% of UV exposure if done between ages 50 and 70, the period of life in which skin cancer is usually diagnosed.7,8

In conclusion, sun exposure and geographic location are risk factors for the accumulation of UV radiation and the development of the most common skin cancers. Intense exposure at an early age affects its increase during adulthood. The population of our country receives high doses of UV radiation starting at birth. Most of this dose can be reduced by any of the sunscreens available on the domestic market, if applied strategically.