Neuhauser syndrome is an extremely rare genetic disease, most cases are sporadic by spontaneous mutation, but there are cases of autosomal recessive genetic transmission; the specific cause is unknown and has no diagnostic test. The disease is clinically characterized by primary megalocornea, congenital hypotonia, mental retardation of varying degree and delayed psychomotor development. The diagnosis in childhood is usually performed by oculo-neurological criteria. The patients have a peculiar face by specific craniofacial anomalies: round face, wide prominent forehead, hypertelorism, broad nasal bridge, bulbous nose, wide philtrum nasolabial wide, thin elongated mouth, big and protuded ear “cup”, jaw undersized (micrognathia) and abnormal posterior positioning of the mandible (retrognathia).The use of facial dysmorphism helps to delineate the phenotype and achieve the punctuation required for the diagnosis, allowing early management and prevention of complications.

The first reports of Neuhauser syndrome were made in patients with megalocornea, hypotonia, and mental retardation, which are the major manifestations of the syndrome;1 upon finding the same signs in other patients who also had facial dysmorphism, Neuhauser syndrome was established.2 This oculus-neurological syndrome must be distinguished from others with the same eponym: Boucher-Neuhauser syndrome (oculus-cerebellar), Neuhauser-Opitz syndrome (cerebellar-gonadal) and Neuhauser-Daly-Magnelli syndrome (oculus-cerebellar-digestive). To date, 38 patients have been reported with this syndrome, which occurs worldwide, affecting all races and showing no preference for any sex.3 Most cases are sporadic and occur spontaneously for unknown reasons; there are also familial cases of autosomal recessive inheritance.4

Diagnosis is made in childhood based on the main criteria of primary megalocornea, congenital hypotonia, mental retardation of varying degrees, and delayed psychomotor development. There are also secondary disorders such as ocular disorders: iris hypoplasia, iridodonesis, and visual acuity deficiency due to myopia; and neurological disorders such as epilepsy, other convulsive disorders, and abnormalities of movement coordination (Table I).5 The syndrome’s facial dysmorphism defines the disease’s phenotype, and it comprises minor anomalies that do not require medical intervention and are often described by areas or regions, detailed in Table II.6 The face has a peculiar look with a round face, a wide and prominent forehead due to protrusion of the frontal region; the eyes show a greater separation than normal due to ocular hypertelorism, measurable by increased pupillary distance (Figure 1). There is a palpebral skin fold of the epicanthus on the inner corner of the eye, the palpebral fissures are wide, almond-shaped, and downward-sloping due to descending placement of the outer corner.7 The middle of the face shows full cheeks due to increased soft tissue located between the zygomatic arches and the region of the lower jaw, giving a prominent and rounded appearance to both cheeks. The nasolabial fold or philtrum is wide and has a very shallow depression; the mouth is elongated with thin lips; the jaw region shows an underdeveloped chin with small lower jaw (micrognathia) and posterior location (retrognathia) (Figure 2).8 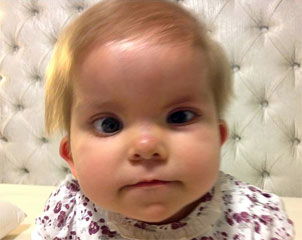 Diagnosis requires a multidisciplinary team. Neuhauser syndrome must be differentiated from non-progressive megalocornea by X-linked inheritance; from congenital megalophthalmos; from megalocornea with glaucoma associated with other systemic malformations such as Down syndrome, Marfan,9 and related diseases such as homocystinuria and mucopolysaccharidosis. Cases of autosomal recessive inheritance have a recurrent risk of 25% per pregnancy; sporadic cases have no risk of recurrence.10 The syndrome is stable and non-evolving; it improves a little with physical therapy and psychomotor stimulation to help control body movements and stimulate communication with the outside world. Patients have to wear corrective lenses for myopia and astigmatism from an early age to avoid visual impairment; they also tend to use moisturizing eye drops and artificial tears to maintain eye lubrication. Megalocornea can predispose the patient to develop glaucoma and increased visual deficit, leading to psychomotor impairment. Convulsive problems should be controlled with antiepileptic medication.

Using the clinical score rating system, probable cases can achieve accurate diagnosis and ensure earlier diagnosis, since there is no specific test for the disease. Early medical intervention in childhood helps prevent clinical deterioration and may prevent the ocular complications of glaucoma and cataracts, or neurological impairment secondary to uncontrolled seizures, which would result in improved quality of life for patients and their families.