Patients in treatment with allopurinol are in risk of having life threatening adverse reactions particularly at the beginning of the treatment. Two percent of the patients prescribed with this drug have associated severe cutaneous adverse reactions. We present two cases of allopurinol hypersensitivity syndrome in mexican patients in which asymptomatic hyperuricemia was the indication to its use. The general physician and the specialist must be alert of this syndrome that causes elevate morbidity and mortality.

Allopurinol is a structural analogue of hypoxanthine that effectively reduces serum uric acid levels.1 Hyperuricemia has a prevalence of 5 to 8% in the general population, and 15% in hospitalized patients. It is defined as the presence of blood uric acid levels above 0.42 mmol/l. The main pharmacological indications for allopurinol are asymptomatic hyperuricemia, recurrent episodes of gout, gouty arthropathy, tophi, and nephrolithiasis associated with uric acid.2

Patients treated with this drug have the risk of potentially fatal reactions. These symptoms usually begin 4 to 8 weeks after ingestion.2 The patients most susceptible to these adverse effects are the elderly or carriers of underlying renal disease treated with thiazides, and/or inappropriate doses of the drug.3 The most severe reactions are characterized by systemic hypersensitivity. This syndromic expression affects 0.4% of patients taking the drug, with a probability of death ranging from 20 to 30%.4

According to Singer and Wallace,5 allopurinol hypersensitivity syndrome is established by a clear history of exposure to the drug, absence of other drugs that cause similar clinical signs, and clinical manifestations including at least one of the following major criteria: a) worsening renal function, b) hepatocellular damage, c) rash such as toxic epidermal necrolysis, Stevens-Johnson syndrome, multiform erythema, generalized maculopapular rash, or generalized exfoliative dermatitis. Added to these manifestations is any of the following lesser criteria: a) fever b) eosinophilia, c) leukocytosis.

We present two cases of allopurinol hypersensitivity syndrome in order to inform the medical community of its presence and the importance of its recognition in our population.

Female patient 20 years old admitted to the emergency department of our institution with fever and pruritic rash spread to the face, neck, chest, and extremities as well as development of painful blisters on palms and soles of feet, and conjunctival hyperemia of two days evolution. Three weeks before admission, the primary care physician diagnosed gout and dyslipidemia, prescribing allopurinol and bezafibrate. No use of other drugs or recent infections were documented. Physical dermatological examination found generalized dermatoses on the face, neck, thorax, and extremities, characterized by confluent erythema, vesicles in upper limbs, blisters on palms and soles of feet, conjunctival hyperemia, epiphora, and photophobia. Allopurinol was suspended and skin biopsy was performed. In the following 48 hours blisters and epithelial detachment developed on over 50% of the body surface. Paraclinical examinations showed elevated PCR (2.2 mg/dl), increased transaminase (SGOT 80.5 IU/l, SGPT 115 IU/l), mixed dyslipidemia (TGL 920 mg/dl and cholesterol 344 mg/dl) and moderately increased nitrogen (creatinine 1.2 mg/dl and urea 63.63 mg/dl). The complete blood count, serum electrolytes, and urinalysis were normal. The histopathological result of skin biopsy showed epidermal basal vacuolization, necrotic keratinocytes, and marked dermal-epidermal separation. The histological diagnosis was toxic epidermal necrolysis. During hospitalization the patient was stable and afebrile. Treatment was based on methylprednisolone for the first 72 hours (2 mg/kg/ day) with gradual reduction. Ophthalmology services were consulted for the treatment of ocular manifestations, and endocrinology to control dyslipidemia. She was discharged due to clinical improvement.

Male patient 13 years old with no significant history. He was admitted to the emergency room of our hospital with fever, asthenia, hypodynamy, hyporexia, conjunctival hyperemia, ulcers in oral mucosa, dysphagia, and pruritic maculopapular rash on the face, neck, chest, and upper extremities of four days of evolution. Three weeks before the signs, he was prescribed allopurinol for asymptomatic hyperuricemia (serum uric acid of 7.3 mg/dl). No other medication or recent infection was documented. Physical examination found ulcers on genitals and oral mucosa, conjunctival hyperemia, and dermatosis spread to the face, neck, chest, abdomen, and upper extremities, characterized by erythematous papules arranged in bullseye with some vesicles (Figures 1 and 2). The body surface area affected was about 40%. On admission allopurinol was discontinued, biopsy of affected skin was performed, and laboratory studies were done that showed abnormal hepatic function tests with a hepatocellular pattern (LDH 706 IU/L, SGOT 175 IU/l, SGPT 475UI/l, AP 235.6 IU/l). The blood labs, acute phase reactants, serum electrolytes, blood chemistry, and urinalysis were normal. The histopathologic diagnosis was toxic epidermal necrolysis (Figure 3). Treatment was with methylprednisolone for the first 72 hours (1.5 mg/kg/day) with subsequent reduction scheme. He received multidisciplinary treatment from nephrology, endocrinology, ophthalmology, and dermatology. He was discharged due to clinical improvement. 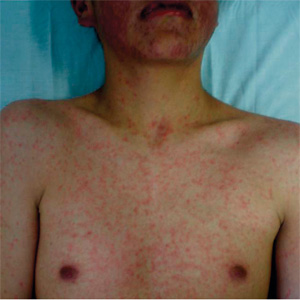 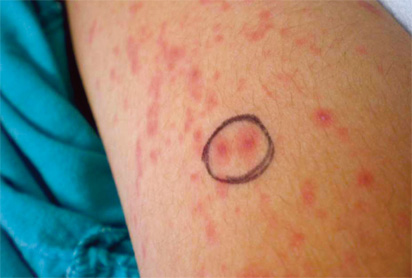 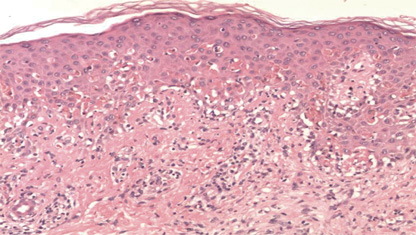 Drug hypersensitivity syndrome is a severe reaction affecting internal organs. Among the drugs that most often cause it are antiepileptics, sulfonamides, and allopurinol, among others.6

We present two cases with diagnostic criteria for allopurinol hypersensitivity syndrome. Both showed hepatocellular disease and toxic epidermal necrolysis. Recognition and treatment of the signs with anti-inflammatory steroids were crucial to prevent fatal complications. Treatment with systemic steroids in the early days of the evolution of the disease is considered the most effective, however studies are needed for the assessment of alternative therapies such as intravenous immunoglobulin.7

While in Mexico the prevalence of adverse reactions associated with allopurinol is uncertain, they appear to be rare. In a prospective study at 10 months with 4785 patients in a public hospital in Mexico City, the prevalence of adverse skin reactions was 0.7%. The drugs frequently implicated were amoxicillin, amphotericin B, and metamizole.8 In another recent study by another institution, the prevalence was similar but the drugs most involved were trimethoprim-sulfamethoxazole, piroxicam, and carbamazepine.9

The annual incidence of Steven-Johnson syndrome/toxic epidermal necrolysis (SJS/TEN) is estimated at 2 cases per million population per year, although it varies depending on ethnic origin.6 Recent reports in Europe and Asia show association between allele HLA-B*5801 and adverse reactions to allopurinol.3 In these cases, doses higher than 200 mg/day show a significant increase in the risk of developing these.6 Therefore, it is suggested that initial allopurinol doses of 1.5 mg per glomerular filtration unit, can reduce the risk of allopurinol hypersensitivity syndrome because renal clearance of oxypurinol, the toxic metabolite involved in this syndrome, is directly proportional to renal creatinine filtration.4

In 2011, the Food and Drug Administration of the United States (FDA) reported 218 cases of adverse skin reactions to allopurinol worldwide from January 2001 to October 2009. The countries with the highest cases were the United States with 63, Japan with 45, Germany with 30, France with 24, Italy with 29, and Thailand with 5. No cases were documented in the Mexican population during this period, so we believe it is important to disseminate these cases.

Allopurinol is an affordable, useful, and effective drug for certain pathological conditions. However, due to the potential risk of lethal side effects, it should be prescribed rationally, at appropriate doses, and under precise and justified indications.4