Background: Harboring a high mortality, the incidence of sepsis is increasing; thus detection, identification and susceptibility tests of the involved microorganisms become urgent.

Methods: We reviewed the records from January 2013 until July 2014 of a total of 4110 blood culture bottles taken from adult patients in a private tertiary hospital.

Results: Growth of microorganisms was observed in 559 bottles (12.6%). We emphasize that 2648 blood cultures (60 %) were taken in two paired aerobic and anaerobic bottles drawn at the same time (1324 pairs); from these, growth was observed in 182 inoculated bottles drawn from two different sites at the same time from 135 patients (13.7 %). In 86 pairs of bottles with samples from 54 patients (40 %), growth occurred only in the aerobic blood culture bottles. Also, growth of microorganisms was observed only in anaerobic bottles in 24 pairs (13.19 %), corresponding to 21 patients (15.5 %, p < 0.05 %). In blood cultures from 32 out of 60 patients with growth in both media (53 %), microbial growth was detected first in the anaerobic bottle.

One of the most serious entities that occurs in infectious disease is sepsis. Its frequency is increasing and its mortality is high; therefore, in addition to the rapid detection and identification of the causative organism, it is necessary to know the antimicrobial susceptibility to choose the appropriate treatment and improve the prognosis.

Over the years and despite the development of molecular laboratory techniques for assaying nucleic acids, such as polymerase chain reaction and many other microbiological diagnostic techniques, blood culture is still considered the most useful test for the diagnosis of bacteremia. Microorganisms are isolated in about 10% of blood cultures taken, 7% of them are considered pathogenic germs and the remaining 3%, pollutants.1

In the seventies, Finegold2 reported that strict anaerobic microorganisms cause up to 20% of bacteremia, which supports the advisability of adding an anaerobic one to the blood culture flask for aerobics. However, with the passage of time several factors, including improved colon preparation before abdominal surgery, the increasingly frequent use of effective antibiotics against anaerobes, better isolation techniques, and other actions, have caused the decrease in these bacteremia up to 8, 10, and even 15%.3,4 Lombardi and Engelberg4 established that although mortality from anaerobic bacteremia is 38%, the results of cultures rarely influence the treatment.

With this, Morris et al.5 suggested avoiding the routine use of blood culture flasks with anaerobic medium, although using them isolated more microorganisms, in addition to the strict anaerobes.

Mermel and Maki6 justified for clinical use, with a positive result, the important relationship of the volume of blood inoculated into the blood culture flask; they mentioned that at least 20% of the samples do not have adequate volume, and establish that each additional milliliter of blood increases positivity by 3.2%, which may explain the different rates of microorganism isolation between different studies. Goldstein’s study1 reports that blood drawn for the blood culture is inoculated first into the aerobic flask and remaining into the anaerobic environment, so many times the volume in this second flask is smaller, and it is possible that the number of patients with anaerobic bacteremia has not decreased; they also note that the rate is probably overestimated by up to 20%, as was reported in 1977.2 The author concludes that any dogmatic approach to the use of the anaerobic blood culture flask should be rejected, and recommends that each institution determine its use according to the prevalence of anaerobic bacteremia in patients they attend; the author also clarified that when used together with the aerobic flask, the chances of isolating aerobes, anaerobes, and facultative anaerobes increase.

In this report we retrospectively reviewed the records from a period of 19 months to characterize the attributes of the detection of microorganisms using sets of aerobic and anaerobic blood culture flasks; we also determined the time between inoculation and detection of growth, and compared times when the microorganism grew in both flasks.

We reviewed the results of blood cultures processed from January 1, 2013 to July 31, 2014 in the Microbiology Laboratory of the Hospital San José of the Instituto Tecnológico de Estudios Superiores de Monterrey. This is a private, short-stay teaching hospital for tertiary care, with 220 beds, with intensive care units for transplant patients and patients with oncological diseases. It has an average of 1372 discharges per month and the rate of nosocomial infections was 1.9 per 100 discharges.7

We only selected blood cultures performed in adult patients from the different medical and surgical services and the different units (oncology, transplantation, intensive care, etc.).

Blood cultures were taken by medical indication. Patients who were included in the study were recommended simultaneous sampling (pairs of flasks: aerobic-anaerobic) to compare recovery and speed of growth.

For each sample, researchers recorded the date and time of the blood culture drawing, flask type (aerobic-anaerobic), blood volume, sex, age, service, bed number, site of sampling, time to positive blood culture, and outcome. The site of sampling was classified by if it was through central venous catheter or peripheral venipuncture.

It was suggested to aseptically draw 20 mL of blood and distribute it equally, first in the BACTEC Plus Aerobic/F flask and then in the BACTEC Lytic/10 anaerobic/F flask (Becton Dickinson, Sparks, MD, USA). The flasks were incubated in the automated Bactec FX system (Bectron Dickinson, Sparks, MD, USA) at 35 °C for seven days. Those that the Bactec detected as positive were subcultured, and the time from starting incubation to detecting growth was determined. If microorganisms grew in both flasks, time was compared and they were considered to have grown in the same time if the difference between the two flasks was less than 12 minutes.

In the flasks whose content was positive, Gram staining was used and inoculation was done in Columbia colistin nalidix agar (CNA) with sheep blood at 5%, MacConkey agar, chocolate agar, and anaerobic sheep blood agar; they were incubated at 35 °C for 48 hours.

Isolates with clinical significance developed in aerobic and anaerobic flasks were compared by Fisher's exact test depending on the type of microorganism. Descriptive measures (number, arithmetic mean, standard deviation, and median) were applied. The times to positive growth were tabulated for bacteria (Gram negative, Gram positive) grown in aerobic-anaerobic flask pairs. Median time to positivity with confidence intervals (95% CI) were estimated by the Kaplan-Meier method. Comparisons between arithmetic means for the growth of microorganisms in both aerobic and anaerobic flasks were performed using the Wilcoxon test. The tests were two-tailed and considered significant at the 5% level. 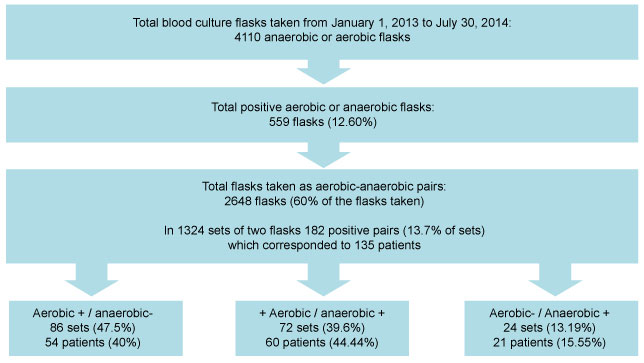 Of the 21 patients with microorganism growth only in the anaerobic flask, strict anaerobes were isolated in 3 (14.2%) (Bacteroides spp. in two and Prevotella spp. in one), representing 2.2% of the 135 patients detected with bacteremia when using sets of two flasks. The rest grew facultative anaerobic organisms, especially Escherichia coli.

In the blood cultures of 32 of the 60 patients (53%) that showed growth in both flasks, this was first detected in the anaerobic flask (p < 0.05); the difference in average growth time was three hours and 19 minutes (range 12 minutes to 71 hours).

In the negative blood cultures, the average volume of blood inoculated was 5.7 mL, whereas the positive was 8.3 mL.

Several studies suggest simultaneously taking an anaerobic and an aerobic blood culture.8-11 However, given the increase in the number of isolates of strict aerobes such as Pseudomonas, Acinetobacter, yeast, etc., and the decreased rates of anaerobic bacteremia,1,4,12 in recent years the advantage of routine drawing in anaerobic flasks is doubted, and it is recommended to limit it to patients with specific diseases, particularly gynecologic or colorectal; it is even suggested, to not decrease the volume of blood collected, to draw two aerobic flasks, when anaerobic is not indicated. This selective use of anaerobic flasks is difficult to carry out because 9 to 16% of bacteremia from strict anaerobes occurs in patients without classic risk factors, and it also can occur in different hospital services.5,12,13

Of patients with bacteremia detected, in 2.2% of them this infection was from strict anaerobes, a rate consistent with the 0.5-5% currently reported;13,15-17 anaerobic flasks represented only 14.2% of the 21 positive patients.

While our results, like others, show a very low rate of bacteremia from strict anaerobes, what is relevant is the detection of 18 isolates of facultative pathogens that grew only in an anaerobic flask (without which it would not have been detected), which represents 13.3% of all patients. In these cases, the isolation of enterobacteria predominated, mainly E. coli, which is consistent with other reports.15-17

It is very important to note that when both flasks were positive, the average time for growth in the anaerobic flask came first by an average of three hours 19 minutes, despite the fact that more than half of the patients benefited from a more rapid and timely organism identification and an earlier assessment of their antimicrobial susceptibility.18,19

With the automated system we have, Phoenix® panels can be inoculated directly from the positive flasks, giving reliable identification and the antimicrobial susceptibility report even up to 24 hours in advance.20

Faster and more accurate identification systems such as MALDI-TOF will be even more useful with faster growth microorganisms.21,22

We have not reached the goal of inoculating at least 10 mL of blood in each blood culture flask, and although the flasks we have are more effective than earlier ones,23 the importance of blood volume is evident, because the greater the volume of inoculated blood, the more isolates are obtained.

The rate of bacteremia from strict anaerobic microorganisms in our hospital is very low, which first suggests little use in routine sampling and inoculation in pairs of aerobic and anaerobic blood culture flasks.

However, we believe that at least in tertiary care hospitals it is appropriate to make this decision routinely based on the following concepts:

When microorganism growth occurred in both flasks, the growth in the anaerobic flask came before the aerobic one in more than half of the cases, with an arithmetic mean of 3 hours 19 minutes, allowing earlier identification of the microorganism, susceptibility testing, and more precise treatment design.