Background: Obesity is a risk factor for renal damage. This study aimed to determine the relationship between body fat percent and creatinine clearance in adult patients with and without type 2 diabetes mellitus (T2DM).

Methods: An observational prospective cross-correlation study was carried out among adults with and without T2DM between 18 and 60 years of age. It was determined the time of evolution with T2DM, as well as fat percentage (FP), body mass index (BMI), creatinine clearance (Cockroft-Gault [CrCCG]), glycemia and micro/macroalbuminuria. The correlation between CrCCG and FP was determined by Spearman’s test.

Conclusions: The FP was correlated directly with the CrCCG in subjects with and without T2DM; therefore, we can conclude that the greater the kidney damage, the smaller the fat porcentage in the study sample.

The World Health Organization (WHO) defines obesity as an abnormal excess accumulation of fat that can be harmful to health;1 this condition affects 64.3% of adults in Mexico, while 9.2% of the population suffers from diabetes and 8% from chronic kidney disease (CKD).2,3 Independently, obesity is considered a risk factor for kidney disease and is, in turn, a risk factor for diabetes, hypertension, and cardiovascular disease, which have been associated with renal failure.4

A meta-analysis by Wang et al.5 reported that kidney disease may be associated with overweight and obesity in 24.2% of men and 33.9% women. In industrialized countries it has been observed that this ratio is lower (13.5 and 24.9%) in men and women, respectively.5

Moreover, hemodynamic changes in glomerular filtration have been described in obese subjects; in these the first clinical manifestation of kidney damage is the significant increase of albumin in the urine. These hemodynamic changes are mainly due to dilatation of afferent arterioles, but it has also been documented that there may be efferent vasoconstriction caused by stimulation of the renin-angiotensin system (RAS).6

More than a reservoir of energy, adipose tissue acts as an endocrine tissue, given that it produces adipokines with different metabolic effects that can compromise health.6,7 Other research describes the potential nephrotoxic influence of leptin and angiotensin II; the first could contribute to the genesis of glomerulosclerosis, stimulating glomerular proliferation and the expression of pro-sclerotic cytokines, represented by transforming growth factor beta (TGF-β1).8,9 Angiotensin II, in turn, produces an increase in sodium reabsorption, thus activating glomerulotubular vasodilation, with a consequent increase in renal blood flow, intraglomerular pressure, and glomerular filtration (GF).9 Navarro et al. found a significant correlation (p < 0.05) between adiponectin and interleukin 6 (IL-6) with renal atherosclerosis.8

With prior authorization from the Research and Ethics Committee of the Hospital General "Dr. Agustín O'Horán", an observational, prospective, and cross-correlation study was performed. Adults between 18 and 60 years with confirmed DM2 diagnosis according to the criteria of the ADA (American Diabetes Association) were evaluated, as well as patients without DM2. The study excluded individuals with a history of chronic kidney disease or any renal replacement therapy, under treatment with steroid drugs, people with HIV, pregnant women, athletes, people with edema, or subjects whose corresponding anthropometric measurements could not be obtained.

The sample size was calculated based on an expected value of r = 0.30, a bilateral alpha of 0.05, and beta value of 0.20. People who came to the outpatient hospital were invited to participate. All subjects who met the inclusion criteria and agreed to participate in the study signed a letter of informed consent. A questionnaire was applied to investigate comorbidities and collect the study variables. Age and time with DM2 were determined; weight and fat percentage (FP) after 12-hour fast was measured by bioelectrical impedance with body composition analyzer Model TBF 300 A Tanita®; height was measured with a Seca® brand equipment; BMI was determined; also a blood sample was taken to determine blood glucose and serum creatinine, and a urine sample for protein quantification (micro- or macroalbuminuria). Creatinine clearance was determined by the Cockroft-Gault equation (CrCCG), while the stages of kidney damage were classified according to the guidelines of the National Kidney Foundation (K/DOQI).18

In data analysis, descriptive statistics and Spearman test were used to determine the correlation between CrCCG and FP. This research was funded by the Fundación Mexicana para la Salud Capítulo Peninsular A.C. and Servicios de Salud de Yucatán.

The correlation between FP and creatinine clearance (Cockroft-Gault [CrCCG]) was determined in both groups, which shows that in subjects with DM2 this ratio was higher (Figure 1). 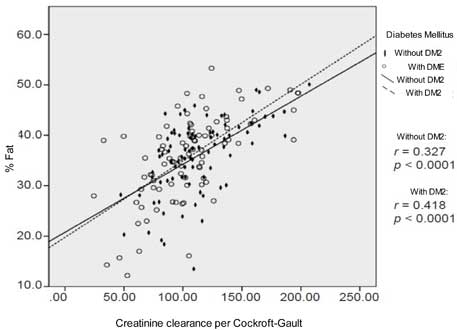 Figure 1 Relationship between creatinine clearance by Cockroft-Gault (ml/min/1.73m2 SC) and fat percentage in subjects with and without DM2 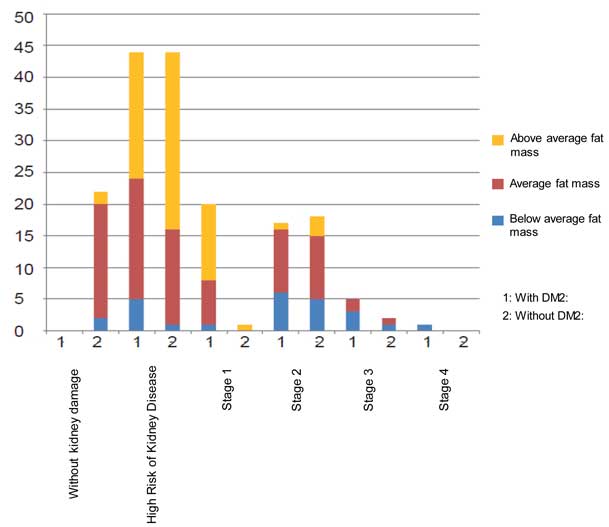 Excess body fat, characteristic of obesity, promotes various structural and functional alterations in the kidney that can lead to CKD.10

In the present study the general characteristics of the population described subjects with excess body weight (Table I); the frequency of overweight and obese men and women was higher than that reported nationally by the ENSANUT 2012 2 (79.1 versus 69.4 and 90.6% versus 73%, respectively), while at the state level it was similar in men (79.1 versus 78.6%), but higher in females (90.6 vs. 82%).11

Comparison of BMI and FP between subjects with and without diabetes was not statistically different. This differs from that observed by Heshka et al.,12 who found that BMI and FP are greater in subjects with type 2 diabetes than in non-diabetics (34.5 vs. 30 kg/m2, 36.2 versus 33.6%). The association between overweight and obesity, as determined by BMI, is clearly established with CKD; there is evidence that obesity alone is a risk factor for kidney damage,13 as adipose tissue releases cytokines that cause insulin resistance (IR), hypertension (HT) and endothelial dysfunction.14,15

In subjects with type 2 diabetes, the glucose was higher (p < 0.0001) than in subjects without diabetes, (179.87 mg/dL vs. 106.48 mg/dL); sustained hyperglycemia is involved in the development of diabetic nephropathy (DN) and is secondary to the toxic effects of glucose through three major mechanisms: 1) through protein glycation, 2) through the activation of aldose reductase and the polyol pathway, and 3) through activation of protein kinase C beta.16 In both groups, diabetic and non-diabetic patients, serum creatinine levels were within normal; however, finding subjects in advanced stages of CKD confirmed that serum creatinine does not fully reflect good kidney function. Studies show that this parameter is not a good indicator of incipient chronic kidney disease.17,18

The prevalence of hypertension in study subjects with and without DM2 was higher than that reported in the ENSANUT 2012 for the population of Yucatán (46.6 versus 13.6%),11 which could be related to the detection of hypertension in study subjects without prior history of the disease. Specifically, in subjects without DM2, hypertension was present in 33.3%, similar to that found in a study of apparently healthy Mexican population (36%);19 in subjects with diabetes it was 59.8%, similar to that reported by Anchundia et al.20 (60%). The literature reports that hypertension is a factor of susceptibility, initiation, and progression of CKD,21 i.e. it strengthens the likelihood of kidney damage; therefore, the probability of chronic renal damage in the population of Yucatan is higher.

The relationship between FP and CrCCG was significant (p < 0.0001) and higher in patients with diabetes than in those without diabetes (r = 0.418 vs. r = 0.327). A study in subjects with DM2 found greater correlation between body fat mass and creatinine clearance, than other components such as lean body mass and total water, similar to that found in our study (r = 0.35, p < 0.0001).22 Published research was not found with which to compare the data of subjects without diabetes.

Subjects without kidney damage were characterized by average percentages of body fat relative to the reference values ​​for age and sex, whereas in earlier stages of kidney damage fat mass is excessive for both diabetic subjects and non-diabetics; however, after stage 3, fat mass decreases. It has been reported that in patients who initiate renal function replacement therapy, malnutrition affects between 16 and 54%, indicating changes in body composition and increased mortality.23,24

Regarding homeostasis, body composition undergoes various changes during life stages: as age increases, body fat mass increases, while lean body mass and bone density decrease.25 In turn, the literature says that renal function worsens as age increases, so the kidneys undergo changes in form and in the glomerular filtration rate; however, this decrease in renal function is not so drastic as to bring a subject to terminal kidney disease.26 In short, as one ages, body composition and renal function are modified naturally; however, none of these changes justify subjects reaching chronic kidney disease.

FP is directly related with CrCCG in subjects with and without DM2, and given that CKD may be affecting not only subjects with DM2, but also those apparently healthy, gives paramount importance to the evaluation of renal function in subjects with DM2 and those who are only obese, without any other risk factors for its development.