Background: The objective was to determine the association between serum lactate levels and mortality in patients with septic shock in the Emergency Room of the Instituto Mexicano del Seguro Social’s Centro Médico Nacional Adolfo Ruiz Cortines.

Methods: We included the patients admitted to the Emergency Room with diagnosis of septic shock who had measure of serum lactate at admission during the period 01-12/2013; it was a case-control study. The cut-off value of serum lactate associated with mortality was performed using the ROC (receiver operating characteristic) curves.

Conclusions: The levels of serum lactate greater than four are associated to an increased risk of mortality in patients with septic shock.

Septic shock is a form of distributive shock characterized by inappropriate peripheral vasodilatation uncompensated despite preserved or increased cardiac output, so the patient presents organ hypoperfusion with decreased oxygen and nutrients to the tissues, which is results in cellular dysfunction, altered cellular metabolism by hypoxia, and toxic effects of free radicals or by effects of inflammatory mediators.1

Several studies have shown that lack of oxygen delivery to tissues causes an increase in lactate concentrations in patients with sepsis. The relationship of arterial lactate concentration and survival in sepsis correlates with prognosis between hyperlactatemia with severe sepsis and septic shock, and an increase in lactate persisting more than 24 hours has been found associated with the development of multiple organ failure and mortality as high as 89%.1 This hyperlactatemia is due to an anaerobic metabolism of glucose to pyruvate, known as glycolysis; pyruvate is metabolized to carbon dioxide and adenosine triphosphate (ATP) by the absence of oxygen, which causes a reduction of pyruvate to lactate and causes hypoxic hyperlactatemia, with a lactate/pyruvate ratio > 10.2

Lactate concentration increases as the rate of production exceeds the rate of elimination.3 In patients with severe sepsis or septic shock, this is not only because of the overall hypoperfusion, but secondary to metabolic changes in the cell that are characteristic of sepsis, such as accelerated glycolysis with pyruvate and lactate production due to increased activity of the Na/K ATP-ase pump of the skeletal muscle and ATP consumption in patients with sepsis; the inhibition of the pyruvate dehydrogenase complex; decreased lactate clearance by the liver, and the increase in lactate production by inflammatory cells such as leukocytes.4 Normally, the reference value for blood lactate is less than 2 mmol/L. During exercise, the lactate concentration can be increased from an average level of 0.9 mmol/L to 12 mmol/L; however, the concentration of pyruvate in such cases rises in parallel with the lactate, making the lactate/pyruvate ratio remain within normal (6/1 or 7/1).5

Elevated serum concentrations of lactate are found in comorbidities as cirrhosis, chronic renal failure, diabetes mellitus, cancer, seizures, cholera, acute pancreatitis, and pharmaceutical use (biguanides, isoniazid, nitroprusside, ethanol, salicylates, etc.), so such conditions may alter the interpretation of the prognostic value of hyperlactataemia in patients with severe sepsis and septic shock.5-7

The aim of this study was to determine the association between serum lactate levels as a predictor of mortality in patients with septic shock.

An observational, case-control, ambispective (prevalent and incident cases) study was performed in the emergency department of the Servicio de Urgencias of the Unidad Médica de Alta Especialidad of the Hospital de Especialidades 14 of the Centro Médico Nacional “Adolfo Ruiz Cortines” of Instituto Mexicano del Seguro Social (IMSS), in Veracruz, Mexico, for a period of 12 months during 2013, in patients of any age having the diagnosis of septic shock and who met the criteria for systemic inflammatory response syndrome (SIRS),6,7 plus infectious focus. Variables considered were lactate levels on admission, age, gender, comorbidities (hypertension, diabetes mellitus, chronic obstructive pulmonary disease, ischemic heart disease) and death.

All patients who met the criteria and were part of the study had serum lactate levels determined on admission. A gasometer was used, GEM Premier 3000, from the Instrumentation Laboratory, Spain. The patients were divided into cases and controls, control being considered all patients diagnosed with septic shock but who did not die; then the relationship between serum levels of lactate and associated mortality was analyzed.

This article was subject to the ethical standards of the Helsinki Declaration of 1975, the agreement on the topic issued by the Secretaría de Salud and published in the Diario Oﬁcial de la Federación on Friday, January 4, 2013 (NOM-012-SSA3-2012), and the rules of the Committee on Human Experimentation of the Instituto Mexicano del Seguro Social and the Centro Médico Nacional “Adolfo Ruiz Cortines”. The study is registered with number R-2013-3001-60 and was approved by the IMSS Local Research and Ethics Committee on Health Research, number 3001.

Data were reported as mean and standard deviation for numeric variables and frequencies and percentages for qualitative variables. The association between serum levels of lactate and death was performed using chi-squared test and the quantification of risk by odds ratio. The cutoff value of serum lactate, to discriminate whether or not it was a risk factor, was done by ROC curves (receiver operating characteristic). This cutoff value was determined for the analysis of association and quantification of risk and to establish the value of sensitivity, specificity, positive predictive value (PPV) and negative predictive value (NPV). SPSS software, version 20 for the statistical analysis was used. P < 0.05 was considered statistically significant. 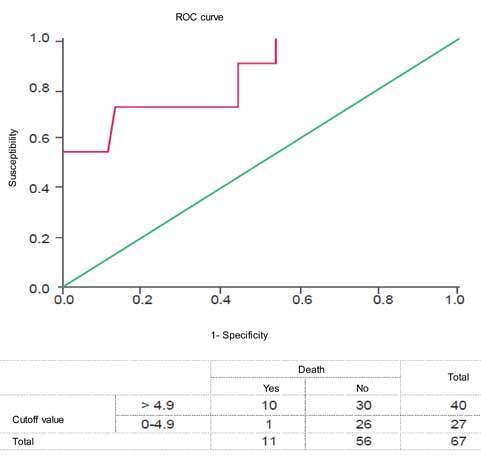 Figure I ROC (receiver operating characteristic) curve in the ratio of lactate with mortality in patients with septic shock. AUC = 0.849 with 95% CI

The interaction between serum lactate levels and the presence of diabetes mellitus together did not potentiate the risk for mortality (Table II). There was a higher mortality association with the cutoff level > 4.9 mmol/L (90.9%) when compared with the levels higher than < 4.9 mmol/L (9.1%), which were statistically significant: p = 0.04. Diabetes mellitus was also associated with mortality: p = 0.02 (Table I). Mortality was not related to the presence of one or more of the following comorbidities: hypertension, diabetes mellitus, and ischemic heart disease; three patients without comorbidities died (27.3%), three with comorbidity (27.3%), three with two comorbidities (27.3%) and two with four (18.2%) (Table I).

The diagnosis and prognosis of septic shock has been a problematic situation in the emergency department, internal medicine, and intensive care. For more than five years consensus has been made to create diagnostic and prognostic criteria for patients with sepsis developing to septic shock; of these, the most current and most important consensus is "Surviving Sepsis Campaign: International Guidelines for Management of Severe Sepsis and Septic Shock 2012".8 These guidelines specify that the determination of serum lactate is useful as a marker of anaerobic metabolism secondary to tissue hypoperfusion; however, we found no correlation between levels of serum lactate and severity of septic shock.

The study breaks down each of the factors that may predispose patients to mortality by increasing the rate of lactate. We found that males were more predisposed and have a greater susceptibility to mortality due to shock, although there is no significant difference with females. In the literature reviewed there is no significant clinical correlation of gender with mortality and increased lactate. In terms of age, there was no significant difference and in previous studies it has not been a factor that increases risk, although the average age is similar to that found in our study, which is approximately 51 years, with maximum age 83.

According to the literature reviewed we found that the relationship of blood lactate concentration and survival in sepsis has a significant relationship with mortality and the development of organ failure with increased lactate after 24 hours, with a mortality rate of 89%,9 results that in our study showed an increased risk of death up to 8.7 times higher with lactate increase > 4.9 mmol/L, so that there is a similarity with the studies found byShapiro et al. in which they recorded that lactate levels above 4 mmol/L were associated with mortality.10

We found that serum lactate above 4.9 mmol/L is sensitive to predict mortality but with a very low positive predictive value, since not all patients with amounts above the cutoff die, but it has a very high predictive value because it was observed that values ​​below 4.9 mmol/L are associated with a low probability of death. In the literature a low sensitivity and high specificity is reported, but predictive values are not reported, so we could not make a diagnostic correlation.3

In our research we found that, although increased lactate alone increases the risk of death when associated with diabetes mellitus, this factor increased the risk of death 5.7 times in these patients. Although in the literature reviewed11,12 association has not been made of this secondary disease with increased lactate > 4.9 mmol/L, it would be important to conduct further studies to improve clinical practice, timely treatment, and prognosis to reduce the mortality rate in patients with septic shock. Considering the data obtained, it could be considered that introducing the measurement scheme of lactate in patients with septic shock and associated diseases would be essential to reduce mortality.

One of the advantages of our study is that it uses the correlation of secondary diseases associated with increased lactate in patients with septic shock. In addition, there was agreement with previous reports by other authors, which corroborates the importance of serum lactate as a prognostic factor in patients with septic shock. Our study was limited to the investigation of lactate levels in relation to mortality in septic shock patients without parameters other than the comorbidities. It would be interesting to compare it with other parameters, such as the use of antibiotics, vasopressors and inotropes, corticosteroids, and other drugs.