Methods: A comparative cross-sectional study was done. Amputations were identified from the hospital records of System of Medical Statistics (DataMart). The DM patient census was obtained from the System of Integral Attention to Health. Major and minor amputations rates were expressed per 100,000 DM patients.

The diabetic foot is one of the most common complications associated with diabetes mellitus (DM); it is estimated that approximately 15 to 25% of patients with DM develop diabetic foot during the course of their disease, i.e. six people with diabetes will have an ulcer during their lifetime. Published studies have shown that this occurs mainly in men and is related to prolonged inadequate blood glucose control from DM.1-3

Globally, the annual incidence of diabetic foot ulcers in patients with diabetes ranges from 1.0 to 4.1%. In developed countries it has been reported that up to 5% of people with diabetes have diabetic foot problems that often result in amputation.2,3

Amputations lead to disability and premature mortality. This disabling condition is one of the most frequent causes of hospitalization for people with diabetes because it generates additional costs of medical care, rehabilitation, treatment, disability, and economic spending due to disability. It is estimated that the direct cost of an amputation associated with the diabetic foot is between 30,000 and 60,000 USD.1,2,4

Studies have shown that the presence of lower extremity amputations in persons with diabetes mellitus is a predictor in the reduction in quality of life.5-10

The Encuesta Nacional de Salud y Nutrición in 2012 reported that, of the total number of individuals with a previous diagnosis of DM, 47.6% (3 million) reported burning, pain, or loss of sensation in the feet, and 2% (128,000) reported amputations.14

The Organization for Economic Co-operation and Development (OECD) includes lower limb amputations in the indicators of quality of care of patients with DM.15,16

The OECD considers that a minor lower limb amputation reflects better quality of care compared to a major amputation; therefore, it is important to analyze the two types of amputations separately, as this can provide us with more accurate data on the quality of care of patients with DM with these complications.

The aim of the study was to describe the rate of lower extremity amputations (major and minor) in subjects with DM enrolled at Instituto Mexicano del Seguro Social (IMSS), during the years 2004 and 2013.

The rate of major and minor amputations of lower extremities was calculated for each of the 35 delegations of IMSS and expressed as the number of subjects with amputations per 100,000 subjects diagnosed with DM enrolled in Family Medicine.

The average age at amputation was calculated for each of the 35 delegations of IMSS.

To compare rates of major and minor amputations, and their average ages between 2004 and 2013, p-values were calculated, using Chi-squared test for the rates, and Student’s t-test for average ages. A p-value of < 0.05 was considered statistically significant.

The delegations Mexico East, Nuevo Leon, Jalisco, Mexico City South, Mexico City North, and Coahuila had a greater number of subjects with DM enrolled in Family Medicine (over 140,000 in 2004 and over 150,000 in 2013).

Regarding the rate of major lower extremity amputations, the delegations of Baja California Sur, Coahuila, Quintana Roo, Tamaulipas, Sonora, Campeche, and Durango had the highest values ​​in 2013; while Veracruz North, Nuevo Leon, and Colima delegations presented the highest rates in 2004 (above 150 x 100,000 subjects with DM enrolled in Family Medicine). Sinaloa and Coahuila presented the most significant increases in the index, while Colima and Nuevo Leon had the most significant decreases (Table II, Figure 1). 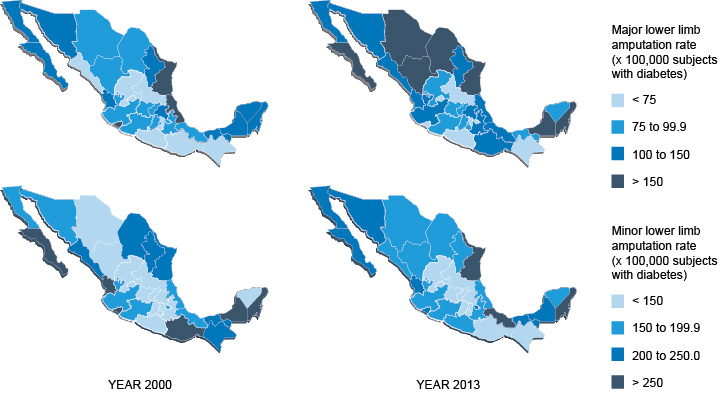 
For minor lower extremity amputations, Quintana Roo, Nayarit, Oaxaca, Campeche, and Colima presented the highest values ​​in 2004, while in 2013, these places were for Veracruz South, Quintana Roo, and Tamaulipas (above 250 x 100,000 subjects with DM enrolled in Family Medicine). Southern Veracruz and Puebla had the most significant increases in this index, while Puebla and Nuevo Leon presented the most significant decreases (Table III, Figure 1).

Approximately 40 to 85% of lower extremity amputations are performed in subjects with DM; of these, 85% are preceded by ulceration of the foot.1 It has already been mentioned that DM is the leading cause of non-traumatic lower limb amputations, being responsible for approximately 50% of these.2 This problem may be accentuated in the future, since the incidence of DM is on the rise in developing countries, probably due to changes in eating habits and sedentary lifestyle. This, plus the extension of life expectancy with the consequent aging of the population, will inevitably increase the prevalence of diabetes and its chronic complications.19

Lower extremity amputations are 15 times more common in patients with diabetes than in the general population, and the risk increases with age: in patients > 65 years it is 7 times greater than in those < 45 years.20 Our study found that the average age for both minor and major amputations ranged between 60 and 70 years, coinciding with the information reported.

The increased number of amputations from 2004 to 2013 can be explained because DM had an increased prevalence from 7.5% in 2000 to 9.2% at the national level, as reported in 2012 by the Encuestas Nacionales de Salud y Nutrición.14

In the United States (US) Lavery et al. have identified a much higher prevalence of DM-related amputations in Latinos (82.7%) compared to African-Americans (61.6%) and non-Latino whites (56.8%).21

In relation to the latest report from the OECD on the indicator of lower limb amputation (Figure 2), we can see that the rate of amputations of lower limbs found in our study is very high compared to countries published in that report; although for 2004, Aguascalientes had a rate comparable with Denmark (21.2), in 2013 all delegations had much higher rates than those reported by the OECD in 2009.23 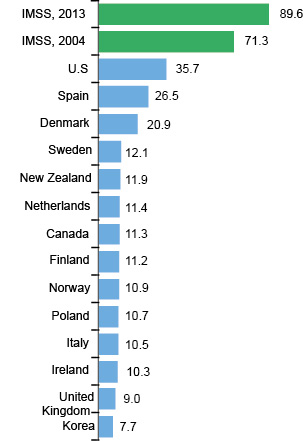 Figure 2 Comparison of the rate of major lower limb amputation x 100,000 subjects in Instituto Mexicano del Seguro Social and member countries of the Organisation for Economic Co-operation and Development (OECD)23


Globally, studies have shown that reducing the risk of amputation in patients with DM reflects better metabolic control, as well as a systematic and routine review of the feet, so it is essential to prevent foot disorders in people with DM and consequently the risk of amputations; efforts must focus on educating the patient and family about foot care.24

This exam should not be dominion of doctors, but the whole health team should be able to do it and prescribe measures and health care that the patient and his family should perform; as well as early detection and timely referral of any irregularity to a specialist.25

Patient education and the use of proper footwear are cost-effective measures to decrease the development of ulcers and amputations by 25-50%.26-28

We thank the IMSS Foundation, A.C., especially Patricia Guerra Menéndez, for their invaluable support in the creation of this work.


Conflict of Interest Statement: The authors declared that there is no personal or institutional conflict of interest of a professional, financial, or commercial nature, during the planning, execution, writing of this article.