Background: Takayasu’s arteritis is a systemic vasculitis that affects the aorta and its main branches mainly seen in young women and it is characterized by decrease or absence of pulses. The arteriography is necessary to corroborate the diagnosis. The aim of this article is to analyze the clinical manifestations and radiological findings in patients with no previous diagnosis of TA

Methods: The patients were sent to the Department of Radiodiagnosis and Imaging for the performance of an angiography for cerebrovascular disease (CVD) in young patients, renovascular hypertension (RVH) and arterial insufficiency (IA) of limbs. Clinical manifestations were used to investigate the diagnosis of AT according to the criteria of the American College of Rheumatology 1990. A digital subtraction angiography (DSA) was performed and the type of AT was evaluated according to Numano classification.

Takayasu’s arteritis (TA) is a systemic granulomatous vasculitis that affects the aorta and its main branches, predominantly in young women and in Middle Eastern countries, although it is common in Mexico and other Latin American countries. It is characterized by chronic, nonspecific inflammation of all arterial layers, causing stenosis, occlusion, dilation, or aneurysmal formations. The clinical manifestations vary widely because they depend on the location of the affected vessels.1-4 Clinical manifestations of TA are divided into early phase (non-specific systemic symptoms: fever, malaise, weight loss, and fatigue), and late phase (occlusive manifestations) at the cardio-cerebrovascular level and in other organs. This sequence of presentation is likely to occur only in a minority of patients because the disease is usually recurrent, leading to the coexistence of several stages at the same time.2 Vascular manifestations may be minimized by the development of collateral circulation with the slow attack of stenosis. The lack of specific early symptoms tends to delay diagnosis because the typical symptoms of the disease occur in the late phase.4

The main clinical findings are characterized by cardiovascular manifestations (decreased or absent pulses, murmurs, hypertension, aortic insufficiency, and others); neurological (headache, stroke, seizures, retinopathy, and others); musculoskeletal (polyarthralgia and non-erosive polyarthritis) and others, such as erythema nodosum.4-8 To diagnose TA, radiology studies - such as arteriography - are essential for the diagnosis and classification of the disease. Several angiographic classification criteria exist, such as that of Ishikawa amended by Sharma (5 types).8 In 1996, Numano proposed a new classification for TA (6 types).9

The aim of this study was to analyze the clinical manifestations, angiographic findings, and their classification in patients without prior diagnosis of TA.

A cross-sectional study was done in patients who were sent to the Departamento de Radiodiagnóstico for an arteriography that would complement the final diagnosis. The study was conducted from January to December 2012 and included patients between ages 16 and 40 who required digital subtraction arteriography (DSA) to confirm the diagnosis of TA, symptoms of cerebral vascular disease (CVD) in the young, renovascular hypertension (RVH) and arterial insufficiency (AI) of some extremities, who had complete medical records and informed consent letter. The study excluded patients with suspicion of other vasculitis, antiphospholipid antibody syndrome, Ehlers-Danlos and Marfan syndromes, allergy to contrast medium, and those without vascular access. Patients were asked for a clinical history focused on identifying cardiovascular, neurological, musculoskeletal, and other manifestations. They then underwent complete digital subtraction arteriography (DSA). DSA was performed using Seldinger technique through femoral artery puncture, a pig tail catheter was placed, iodinated contrast was administered with power injector, and aortogram was performed; then arterial selectivity was performed with a headhunter catheter for carotid, vertebral, and subclavian arteries in general radiology equipment adapted with C-arm, angiography software of the type Siemens Polystar top model 3157554 x 2076, 07222S0IL series.

One of the researchers made the diagnosis of Takayasu’s arteritis in accordance with the classification criteria of the American College of Rheumatology (1990).10 The DSA were interpreted by an experienced radiologist, who determined the type of TA according to the site affected by Numano ranking:9

Once patients were classified according to type of TA, it was related to the manifestations.

In addition to the DSA, color Doppler ultrasound (CDU) of the involved arteries was performed complementarily, evaluating myointimal thickening characteristics and spectral records.

10 patients who met the inclusion criteria were studied, all were women with an average age of 32.4 ± 10 years. The main clinical manifestations for which they were getting tested were: stroke in the young 4/10 cases, hypertension of renovascular source 3/10, and upper extremity claudication in 3/10.

The main cardio-cerebrovascular and musculoskeletal clinical manifestations are presented in Table I. Table II shows arterial affect from DSA in patients with TA, supra-aortic trunks are involved in 80%. Table III shows the main types of TA as rated by Numano, type I being the most common.


Here some cases are presented to illustrate the radiological findings by DSA and Doppler US from this study. Figure 1 shows the case of a woman with cerebrovascular disease in the young (right facial hemiparesis). MRI showed hyperintense left frontotemporal with lenticular involvement and vascular luxury in the T1 sequence with gadolinium corroborating stroke, color Doppler study at the origin of the common carotid artery shows circumferential homogeneous myointimal thickening and with color the vessel is seen partly perfused with a turbulent flow. In the left common carotid the thickening is occlusive. The DSA showed effect on supra-aortic trunks in the early arterial phase, and diameter decrease is observed at the origin of the right common carotid artery, occlusion of the left common carotid artery, and the vertebral artery on the same side, with subclavian steal demonstrated in the late arterial phase and through the posterior communicating artery it is retrogradely opacified, giving irrigation to the left upper extremity. This case was considered as TA type I. Figure 2 shows the case of a woman with vertebrobasilar manifestations and cerebral stroke. In the DSA occlusion of the supra-arterial vessels stands out, there is only flow through the right vertebral artery. This case was classified as TA type I. 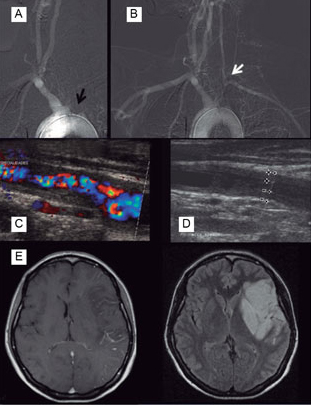 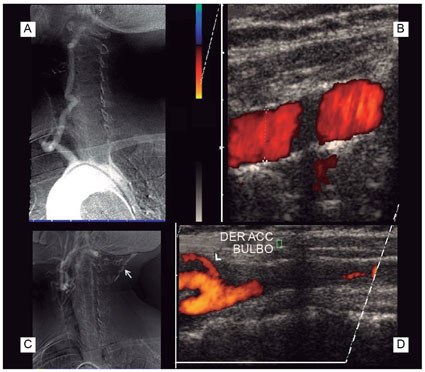 
Figure 3 shows a woman with symptoms of hypertension. The DSA has normal supra-aortic vessels and infrarenal aortic stenosis with right renal exclusion and critical stenosis of the left renal artery. This patient corresponded to TA type IV. 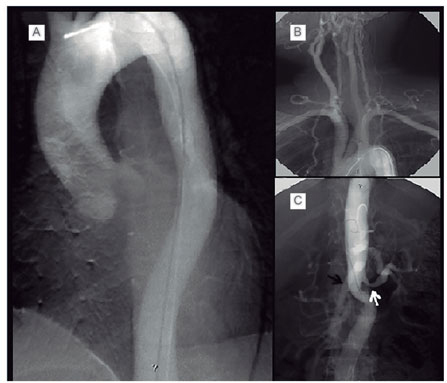 
Figure 4 refers to a patient with neurological manifestations and secondary hypertension. The DSA shows stenosis of supra-aortic vessels, and occlusion of the right renal artery. This case was classified as TA type V.

In the study, the main manifestations for which DSA was done were CVD in the young, RVH, and arterial insufficiency of the upper extremities. The most common type of TA was type I, V which explains the manifestations of CVD and RVH, respectively.

TA is a systemic granulomatous vasculitis whose clinical manifestations are: the result of stenosis, occlusion, and dilatation of the large vessels that affect this illness.11 The manifestations that guide the diagnosis of this vasculitis are decreased or absent pulses, which was present in 100% of patients when they were intentionally looked for, and vascular murmurs in 70%. Other clinical manifestations of our patients were neurological, with stroke in the young in 40%. They were also: headache, dizziness, and visual disturbances, as has been reported previously.12

Another reason for study in our patients was RVH (30%), explained by renal stenosis. Secondary hypertension of renovascular origin as consequence of TA has been reported in up to 60% of cases and must be identified in a timely manner because it can lead to kidney failure. RVH is generally resistant to medical therapy and often requires angioplasty or surgical bypass.13 One manifestation of interest was the subclavian steal, which is characterized by stenosis proximal to the subclavian artery leading to retrograde flow of the vertebral artery on the same side, which acts as a collateral flow. The subclavian steal may be asymptomatic because the Willis polygon produces enough collateral circulation; however, in symptomatic cases, patients report involved extremity and cerebral ischemia as in one of our cases.14-16

Vascular imaging studies - such as arteriography- make it possible to identify the vascular anatomy, but not inflammation of the vessel wall.11 Imaging studies such as DSA allow one to identify the distribution of the affected vessels and greatly facilitate the diagnosis of patients with suspected TA.17 DSA is the gold standard for detecting and classifying the type of vascular lesion (permeability of vessels, areas of stenosis, occlusions, and aneurysmal dilation). With suspicion of TA, complete angiography is recommended to classify and provide medical treatment and/or alternative surgical treatment if necessary.

Color Doppler ultrasound is a noninvasive test that can show wall thickening of affected arteries in early stages and can rule out atheromatous disease. It is increasingly used for diagnosis and monitoring of large-vessel vasculitis. Carotid, vertebral, and subclavian vessels can be studied by CDU. It is a useful study in the prestenotic phase of TA and is complementary to studies with DSA, because it can identify changes in the heart, renal artery, and subclavian stenosis, among others. It can also identify inflammation of the wall of the ascending aorta, valvular regurgitation, pericardial effusion, and more.18 In our study, CDU was complementary to the findings observed by DSA study.

In this paper, DSA was a great help to establish the definitive diagnosis of TA and its correct classification. According to Numano’s classification, in our patients TA type I followed by V and IV were the most frequent. These types of TA have also been reported in other populations.19-21 The clinical and angiographic manifestations observed in our patients are similar to those reported in other countries.19-27

The study showed experience with TA in one hospital for one year, suggesting that is a common vasculitis in Mexico. Our patients were female and had severe manifestations of TA such as CVD and RVH, so the study protocol in these patients should include not only selective arteriography, but a total arteriography to identify other changes at other arterial levels. Moreover, it is important to do physical examination with complete assessment of the pulses, and to investigate history of claudication of extremities, headache, eye lesions, arthralgia and/or arthritis, and skin conditions such as erythema nodosum.

Our work has limitations such as being a cross-sectional study with duration of one year, in which a small sample of patients was found in whom TA was intentionally looked for.

In conclusion, the main clinical manifestations were vascular (absent and/or decreased pulses), followed by stroke and renovascular hypertension.