The vasculities are complex diseases. Their cutaneous manifestations are very important and often mirror several pathologies. Cocaine use has been related to both, vasculitis and thrombotic vasculopathy and pseudovasculitis. A new syndrome has been described in association with its adulteration with levamisole. It can be very serious, leading patients to death. This is relevant as levamisole-adultered cocaine seems to be increasingly offered to consumers. Our goal is to report the first two cases in Mexico, which faces an important raise in cocaine use, emphasizing that a high suspicion based on certain characteristics allows for early recognition and adequate treatment.

Cocaine is a commonly-used drug. In the United States there are five million consumers and in Mexico users have increased from 1.4% in 2002 to 2.5% in 2008.1

As a result of its use neuropsychiatric disorders have been reported, thrombosis of large vessels, and small vessel vasculopathy, which simulates rheumatic autoimmune diseases.2-4 At skin level it produces palpable purpura, digital infarction, necrosis, ulcers, acute generalized exanthematous pustulosis, delusions of parasitosis, and Stevens-Johnson syndrome.5 Since 2006 there have been increased reports of severe leucopenia associated with cocaine,5 which coincide with the use of levamisole to enhance the drug.2 So far only one case has been reported in Latin America,6 to which we add two highly probable cases of this condition, the first in Mexico.

31-year-old man, consumer of cocaine in the last year; last consumption was 15 days before presenting with purplish spots on pinnae (Figure 1a). A skin biopsy was performed with the diagnostic impression of infectious necrotizing chondritis. Histological examination showed thrombotic vasculopathy and intravascular papillary endothelial hyperplasia (Figure 1a). The blood count was normal; HIV, antinuclear antibodies (ANA), rheumatoid factor, and viral hepatitis panel were negative. He was treated with corticosteroids with complete recovery. 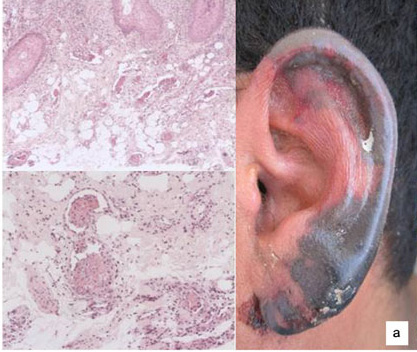 38-year-old man, cocaine user for 20 years, with six months of recurring signs of fever, arthralgia, myalgia, and skin lesions associated with drug use. One week after his last inhalation he presented retiform purpura, star-shaped atrophic plaques, sloughing ulcers on cheeks, auricles, and legs (Figure 1b). He underwent skin biopsy with suspected lupus erythematosus and antiphospholipid syndrome; multiple newly formed vessels, fibrosis, and intraluminal thrombi in small vessels without vasculitis were found (Figure 1b). Laboratory studies showed 600 neutrophils/µL, hemoglobin 4.5 g/dL, 450,000 platelets/µL, normal clotting times and complement, ANA and anti-DNA negative. The patient was discharged voluntarily, but 48 hours after he was admitted to another hospital where he died of apparent diffuse alveolar hemorrhage. 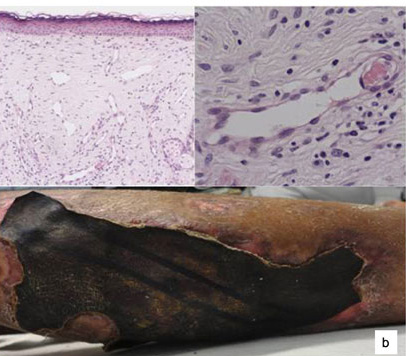 Figure 1b Case 2. Histology showed the beginning of the formation of fibrin thrombi occluding the blood vessels of small gauge in deep reticular dermis and in subcutaneous tissue without inflammatory infiltrate.

These two cases are probably the first reports of this condition in Mexico, a country facing a serious problem of drug consumption and trafficking. In both patients, cutaneous manifestations, neutropenia, and histopathological findings, along with recurrence with each consumption, suggest that the cocaine was adulterated with levamisol.7 We recognize limitations in our reports, particularly the lack of complete serological studies; however, clinical and histopathological data reasonably support the diagnosis.

The presence of purpura and star-shaped ulcers on the auricular, nasal tip, and malar region; histopathologic evidence of mixed vascular disease, consisting of occlusive vascular disease, microvascular thrombosis with or without leukocytoclastic vasculitis, reactive endothelial atypia, and newly formed vessels in association with neutropenia; in addition to serological polyreactivity in patients who use cocaine, should lead to suspicion of this ailment.2,6,8,9 So far effect on internal organs has not been reported with alveolar hemorrhage, which in our second case is suggested by the development of pulmonary capillaritis. Table I shows a comparison of the laboratory, serological, and histological characteristics of vasculopathy associated with cocaine adulterated with levamisole.


Treatment usually consists of supportive measures and withdrawal of the inducing agent, although in severe cases the use of steroids and immunosuppressive drugs is required, similar to what is done in autoimmune diseases.2-9

It is estimated that about 70% of the cocaine consumed today is contaminated with levamisole, with risk of developing infections or syndromes that mimic rheumatic diseases, so that timely clinical suspicion is essential and requires dissemination in the face of likely growth of the problem. Our cases coincide with existing reports.