Background: It has been shown that the TREM-1 glycoprotein belongs to the immunoglobulin superfamily that induces secretion of various proinflammatory cytokines. The aim of this study was to measure the expression of TREM-1 in patients with cervical cancer.

Conclusion: This study shows increased expression of TREM-1 in monocytes from patients with advanced cancer.

Cervical cancer is the third most commonly diagnosed neoplasia and the main malignancy in women of reproductive age. The global annual incidence is 493,000 cases, the annual death rate 274,000, and 83% of cases occur in developing countries. Cancer patients suffer the same infections as people without cancer, but with greater severity and frequency. In the course of their disease, cancer patients present infections, and infection is the cause of death in over 50% of cases, organ failure in 25%, and carcinomatosis in 10%.1-4

TREM-1 (triggering receptor expressed on myeloid cells-1) is a 30 kDa glycoprotein of the immunoglobulin superfamily, which, together with TREM-2, are the prototypes of the TREM family. TREM-1 was identified on human chromosome 6 and is expressed in myeloid cells; it contains immunoglobulin as its only extracellular domain, and has a short cytoplasmic tail.5-7 Its expression has been identified in neutrophils and monocytes, which can enable or expand inflammatory response.8 This glycoprotein is highly regulated by bacterial and fungal infections, is a crucial mediator of septic shock, and is present in some inflammatory processes such as acute pancreatitis, peptic ulcer, or postsurgically after major surgeries.9-12 In various investigations, TREM-1 was only detectable in other inflammatory conditions such as psoriasis, ulcerative colitis, and vasculitis caused by immune complexes.8,13,14

TREM-1 is expressed as a transmembrane receptor complex with DNAX protein of 12 kD (DAP12) in myeloid cells, which in turn facilitates intracellular signal transduction in monocytes; TREM-1 then cross links with phosphorylated DAP12 and recruits, in addition to phosphorylating, growth receptor-bound protein 2 and phosphatidylinositol 3-kinase, and amplifies Toll-like receptors, leading to amplified inflammatory response.15,16 There is an interaction between TREM-1 and TLRs. TREM-1 is upregulated by various TLR ligands including TLR2, TLR3, and TLR4. The agonist binding of TREM-1 with ligands of TLR2, TLR2, TLR4 extends the production of proinflammatory cytokines. This amplifies the inflammatory response in myeloid cells such as macrophages and neutrophils (Figure 1). TREM-1 induces the secretion of various proinflammatory chemokines and cytokines, such as tumor necrosis factor alpha (TNF-alpha), interleukin 8 (IL-8), enzymes such as myeloperoxidase, plus monocyte chemotactic protein-1. TREM-1 also causes neutrophil degranulation, calcium mobilization, phosphorylation of several tyrosine proteins, in particular mitogen-activated protein kinases ERK-1 and ERK-2, and granulocyte-macrophage colony-stimulating factor. This pattern of activation has suggested a role for this receptor in acute inflammatory response (Figure 2).15 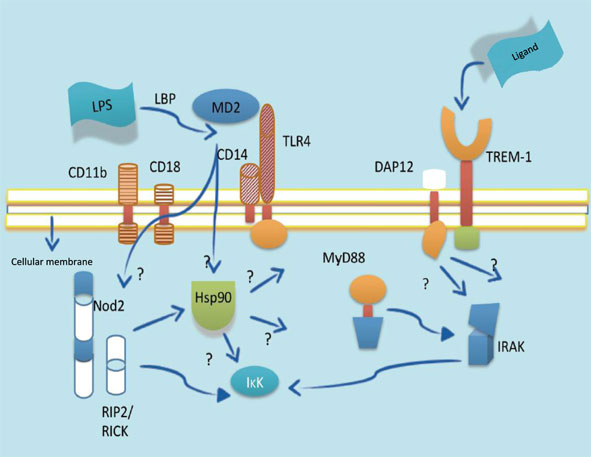 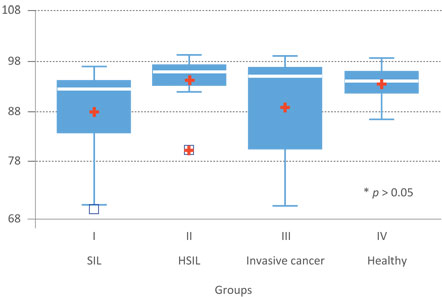 
TREM-1 has been studied in various investigations as a marker of sepsis, and infections are the leading cause of mortality in cancer patients. To the best of our knowledge, we do not know whether TREM-1 expression modifies in neutrophils and monocytes from patients with cervical cancer and its precursor lesions. Learning about the response of TREM-1 in the presence of cancer, and/or precursor lesions, can give us a better understanding of inflammatory response in immunocompromised conditions. Eventually one might consider using monoclonal antibodies against this molecule to modify the course of infections in cancer patients, making opportunistic infections less severe and less frequent. Whether or not the histological course of the lesion is modified is not a matter to be discussed at this time, since TREM-1 involvement is related to inflammatory reaction and not to cancer. Therefore, the objective of this study was to determine whether there is TREM-1 expression in neutrophils and monocytes in patients with cervical cancer and precursor lesions.

The four groups of patients were assembled according to the diagnosis established by the dysplasia clinic. Inclusion criteria for groups of cases were patients over 18 years of age with any of the following diagnoses established in the dysplasia clinic: invasive cervical cancer (Group III), high-grade squamous intraepithelial lesion (Group II/HSIL), and low-grade squamous intraepithelial lesion (Group I/LSIL). The control group (Group IV) was patients with normal cervical cytology and normal blood count values who agreed to participate in the study. Patients were not included who had received any treatment for their disease, who presented another concomitant disease that would cause immune system impairment (diabetes mellitus or rheumatic diseases), as well as patients who had received antibiotics in the 30 days before blood sampling. Once patients were collected in different groups according to diagnosis, they proceeded to sign the consent form after being informed, and had blood sampled. This protocol was submitted for review and approval by the Local Research and Health Ethics Committee (LRHEC) 1310 of the Instituto Mexicano del Seguro Social, registered with number F-2010-1310-51.

TREM-1 measurement was performed by flow cytometry of blood samples. In addition to obtaining the percentage of cells expressing TREM-1, the mean fluorescence index (MFI) was calculated corresponding to the division of the geometric mean fluorescence of the sample over the geometric mean fluorescence of the negative control and/or isotype control. Blood samples were centrifuged to ensure separation of the formed blood elements, decanting the elements not necessary for the examination and keeping only the white formula for analysis. In the first sample no antibody was added, the second sample had IgG immunoglobulin isotype added, and the third sample had an anti-TREM-1 antibody added. Identification of TREM-1 was performed by flow cytometry (BD FACSAria Flow Cytometer, Pharmingen, USA). Depending on the intensity of the fluorochrome or the intensity of these cells, their expression was seen and plotted in histograms showing the cell regions studied, region C being the TREM-1 count in polymorphonuclear cells (PMN), and region E for mononuclear cells (MN), with results expressed in percentages (%).

This technique is based on the principles of excitation and scattering of light and the emission of fluorochrome molecules to generate specific information from multiple parameters, from molecules to cells with a measuring range of 0.5 um to 40 um in diameter. Depending on the type of molecule or cell being looked for, these are hydrodynamically focused on a piece of paper known as PBS before finding the focus of the most appropriate course of light. The light is of the laser variety. It is a process in which the molecule or cell under consideration is identified, and it is observed what light emission is right to identify it, and by means of hydrodynamic techniques the particles not being studied spread out around the light emitter, objects of study being in the center. Depending on the intensity of the fluorochrome, or the intensity of these cells, its expression is determined and plotted on histograms. These results are expressed as percentages through histograms, which show the regions of the cells studied. Region C is the TREM-1 count for polymorphonuclear cells, and it is region E for mononuclear cells.

The response variables are presented in raw numbers or percentages. Quantitative variables were expressed as mean ± standard deviation (SD) of the mean, and independent samples were analyzed by the Student’s t test. For these variables, the Mann-Whitney rank sum test was used, when that failed, the test of normality. Student’s t test was used for quantitative variables of age and weeks of gestation, the results represented as averages. Chi-squared test was used for the qualitative variable of TREM-1 expression, representing the results in percentages and proportions. All p-values equal to or less than 0.05 were considered statistically significant. The analysis was made using SigmaStat programs (v 2.0).

In all groups the percentage of expression and the Mean Immunofluorescence Index of TREM-1 was looked for in neutrophils and monocytes from peripheral blood. The average age of the patients for groups I, II, III and IV was 32.3 ± 8.5; 45.1 ± 13.1; 46.1 ± 14.3, and 39 ± 8.9, respectively. We only found a statistically significant difference when comparing patients with LSIL (Group I) versus groups II (HSIL) and III (invasive cancer) [p = 0.013]. 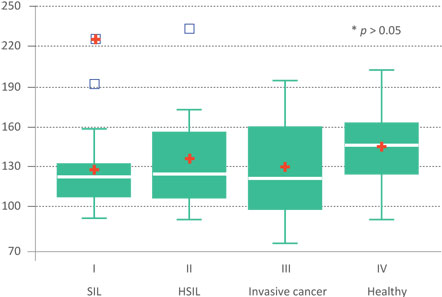 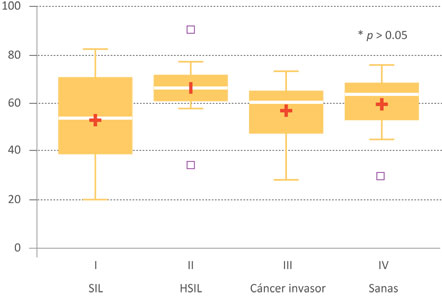 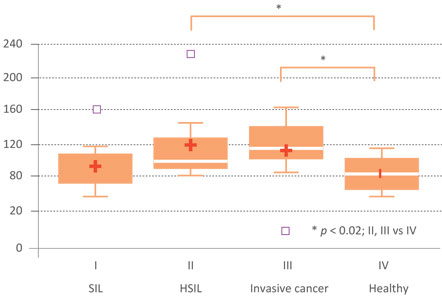 The results obtained when comparing the groups by patient age showed significant difference in some, which would mean that the groups are not exactly homogeneous; however, for the purposes of this investigation (TREM-1 expression in these pathological conditions), it is not relevant. When the groups were compared in relation to leukocytes and numbers of monocytes there was no significant difference, i.e., the groups were similar. However, when comparing neutrophil counts from Group II (high-grade squamous intraepithelial lesion) with the other groups, we observed that these had greater numbers, but this did not interfere in the TREM-1 expression results which was the main objective of this study, as this was expressed with no significant difference in neutrophils in the 4 groups.

Our study looked for the expression of TREM-1 in each precursor stage of cervical cancer, and expression of this immunoglobulin was found in all groups with no significant difference in the percentage of expression in neutrophils and monocytes when comparing diseased and healthy groups of patients. This would mean that, despite the progress of abnormality in cervical tissue, there is no interference in the percentage of cells expressing this inflammatory marker, at least with this sample size. No significant difference was found in the MFI of neutrophils. Significant difference was only found in MFI in monocytes from patients with high-grade squamous intraepithelial lesion (Group II) and invasive cancer (Group III) compared with the group of healthy patients (Group IV). This means that the monocytes of these patients that expressed TREM-1 had a greater number of receptors for this molecule compared to the healthy group, which makes us think that with greater severity of the disease, there is increased inflammatory response in patients and, therefore, higher concentration of this inflammatory marker. This is relevant, as these patients would have an increased inflammatory response to infectious processes and perhaps a less benign disease course, as the exaggerated inflammatory response may cause further injury to the affected tissue.

Not finding significant difference in the level of TREM-1 expression in neutrophils and monocytes in addition to the MFI of neutrophils may be due to sample size, and further studies would be needed involving larger sample sizes to obtain different results.

In patients with cytological abnormalities, the concentration of TREM-1 receptors in monocytes is directly related to higher degree of cervical malignancy and therefore greater inflammatory response. Regarding the level of expression of TREM-1 in neutrophils and monocytes, a satisfactory conclusion could not be reached as to whether or not there is increased TREM-1 expression in the diseased group compared with healthy patients, due to sample size, so a larger sample would be needed. Finally, we conclude that TREM-1 is so far only a marker of inflammatory response and that more studies are needed to clearly understand its function in addition to its utility in the clinical setting.