An aneurysm of the sinus of Valsalva is a rare cardiac anomaly (0.09% of cases in autopsy studies). This article describes the case of a male patient, 58 years old with a history of smoking and surgery for the correction of sinus of Valsalva aneurysm 31 years before, with no record of approach or type of surgery. His condition began five months before his admission with atypical chest pain. Echocardiographic diagnosis of severe aortic regurgitation, finding recurrent aneurysm of sinus of Valsalva. Surgery was performed with primary closure of the defect and aortic valve replacement with mechanical prosthesis, issuing a favorable postoperative. We present a case of which there are no reports in the current literature.

Aneurysm of the sinus of Valsalva is a rare cardiac anomaly (0.14 to 0.96% of open heart surgery cases performed).1 Although the cause may be acquired, in most cases it is a birth defect caused by a defect in the middle layer of the aorta.2 Aneurysm of the sinus of Valsalva usually remains silent until it breaks,3 although it can sometimes produce different clinical manifestations, such as obstruction of flow in the right ventricular outflow tract, aortic insufficiency, arrhythmias, and, rarely, myocardial ischemia or necrosis.1-7

58-year-old man with a history of tobacco consumption of eight cigarettes a day for 14 years and occasional alcoholism. Correctional surgery of sinus of Valsalva aneurysm 31 years ago, with no record of the approach or type of surgery, performed in the Hospital de Cardiología y Neumología of the Centro Médico Nacional of the Instituto Mexicano del Seguro Social. Asymptomatic for 30 years. Clinical signs begin five months before admission, with stabbing pain in front of chest not related to effort, sudden in onset, 5-10 minutes in duration before disappearing spontaneously, repetition of signs once a week. Comes to family physician for examination, who refers him to the cardiology department of the​​ local general hospital due to cardiovascular history. Upon physical examination he is conscious, calm, cooperative, normal facies, coloration, temperature, and adequate mucous and skin moisture. Normal hair implantation, symmetrical eyes and ears, nose with both nostrils permeable without apparent deviated septum, mouth and oral cavity without disorders, no missing teeth and no evidence of infection, symmetrical neck without palpable masses, unaltered carotid pulse, no murmurs, no signs of jugular engorgement, normal linear chest without disorders upon inspection, midline scar through the breastbone, presence of palpable apex in mid-clavicular line in the fifth intercostal space of 2 cm2, no thrill, well-defined percussion, first auscultation with normal noise, second noise with decreased intensity in aortic area, early diastolic murmur grade IV/VI predominantly in second left intercostal space, increasing in intensity in Harvey position, with isometric exercise, and expiratory apnea. Holodiastolic apex murmur grade III/VI without radiation, without modification in Pachon position.

Vital signs with the following measurements: blood pressure 120/55 mmHg, heart rate of 88 beats per minute, respiratory rate of 18 breaths per minute, temperature 36.8 °C. From the clinical data and the physical examination, aortic insufficiency was initially suspected, for which laboratory tests were performed.

Posterior-anterior chest x-ray with elongated apex, cardiothoracic index of 0.48, Lupi index 0.39, suggestive of pulmonary arterial hypertension. Transthoracic echocardiography (Figure 1) was done, reporting severe aortic insufficiency by pressure half time and measurement of vena contracta, right sinus of Valsalva aneurysm without rupture, left ventricular systolic function preserved, left ventricular dilation with diastolic diameter of 59 mm, systolic diameter 47 mm, and LVEF 70%, mild tricuspid regurgitation with evidence of mild pulmonary hypertension, PASP 40 mmHg. Angiography with 3D reconstruction found recurrent right aneurysm of the sinus of Valsalva, of 43 '29 mm in its largest diameters, with a collar of 17 mm and dilatation of the left intrahepatic bile duct, no passage of contrast was observed into the right ventricle from the aneurysm, nor was there alteration in coronary arteries (Figures 2 and 3). 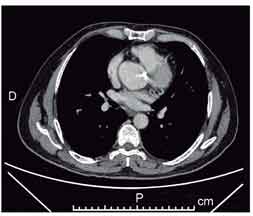 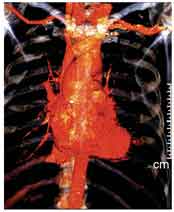 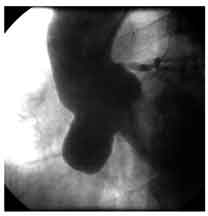 
Coronary angiography reported no injuries in coronary arteries. Aortogram was performed with aneurysm of the right sinus of Valsalva, with no evidence of rupture or severe aortic regurgitation.

Based on the symptoms, despite medical treatment, surgery was chosen (Figure 5) with hybrid technology, aneurysm repair with closure of the defect using part of the aortic valve as patch with primary closure of the residual defect by suture and aortic valve replacement (Figure 6) with mechanical prosthesis with two hemidiscs, without complications. Control echocardiogram was performed after surgery with prosthetic mechanical valve functioning normally without signs of paravalvular leakage, ejection fraction of the left ventricle at 70%, with no evidence of aneurysm of sinus of Valsalva recurrence or fistula. 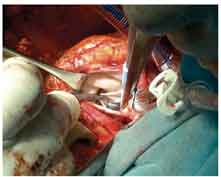 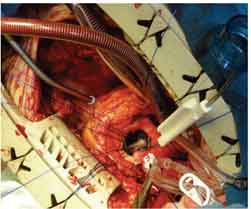 The questions raised in this case were about the frequency of recurrence of this disease, however there are no reports in the literature in follow-up articles since the surgery. Differential diagnoses that emerged were the possibility of aortic valve endocarditis, dilated cardiomyopathy, and coronary artery disease. The 10-year success rate of 94% reported in studies8 confirms the safety of the procedure, but one must consider aneurysm recurrence and the need for replacement of the aortic valve in the long-term follow-up of these patients. There are reports of recurrence of fistula,7,9 which represent 0.6% of surgically treated cases in some studies. The need for reoperation has also been reported due to the presence of severe aortic regurgitation with criteria for valve replacement, which represent up to 25% of cases.4 Even new techniques under investigation propose closure of the defect using an Amplatzer device, which has achieved a success rate of 90%.10

There is a 4:1 predominance of cases in males, with the highest reported incidence in the population of Asia. The diseases most commonly associated with this condition are Ehlers-Danlos and Marfan’s syndrome. It is associated with other congenital anomalies, most commonly ventricular septal defect, bicuspid aortic valve disease, and aortic insufficiency.11

The importance of the case is that in the literature there is no report of recurrence of sinus of Valsalva aneurysm after surgery, so close monitoring is necessary in the postoperative period in order to detect more cases of recurrence and prevent future complications, which may be prevented by evaluating the aortic valve and the future need for valve replacement, as well as new techniques for repairing the defect with Amplatzer occluder devices.