Background: Multiple myeloma (MM) is a monoclonal gammopathy characterized by abnormal proliferation of malignant plasma cells. The median overall survival rate has changed from 2-3 to 5-6 or more years with the introduction of novel agents. Recently CD200 protein has been described as an immunosuppressive protein that confers a poor prognostic factor in several neoplastic diseases, including MM. The purpose of our study was to determine CD200 protein in plasma cells of newly diagnosed patients with MM and in CD3+ lymphocytes of healthy donors.

Multiple myeloma (MM) is a malignant monoclonal gammopathy characterized by abnormal proliferation of malignant plasma cells, which produce monoclonal protein and which, together with the stromal cells of the bone marrow, secrete cytokines and growth factors that are responsible for the clinical picture of this disease.1

The average life of these patients is 2-3 years, however, since 1998 with the use of new drugs (thalidomide, bortezomib, and lenalidomide) and hematopoietic cell transplantation, the median survival has doubled and in some cases it has become a chronic disease.2

In this disease there are well-recognized prognostic factors for predicting disease severity. The protein CD200 has recently been described, and could play an important role in the biology, immunology, and prognosis of this disease.

The CD200 is a type 1a transmembrane protein that is related to the family of B7 costimulatory receptors. It contains two extracellular domains, a transmembrane region and a cytoplasmic tail whose function still not entirely known.

It is part of the immunoglobulin superfamily and is commonly expressed in myeloid lineage cells such as macrophages, dendritic cells, neutrophils, mast cells and eosinophils. However, it has been found also expressed in B lymphocytes, activated T lymphocytes, endothelial cells and cells of reproductive organs.3

Furthermore, the expression of the CD200 receptor (CD200R) is limited to myeloid cells and lymphocytes T.3

It is well known that CD200 is an immunosuppressive molecule, whose bond to its receptor leads to decreased secretion of cytokines by some macrophages such as IL-13, TNFa, IFNa, and IL-17.4,5

Also, with the use of antiCD200R antibodies, the development of tolerogenic dendritic cells is induced, resulting in induction of regulatory T cells that inhibit cytotoxic T lymphocytes.6

The CD200 protein has been described as a prognostic factor in MM and hematologic diseases such as acute myeloblastic leukemia.7,8

Moureaux et al. have shown that in patients with multiple myeloma, the expression of CD200 is observed in 78% of newly diagnosed patients and their expression correlates with a short event-free survival (14 months versus 24 months), regardless of other adverse prognosis factors such as stage 3 of the International Staging System (ISS) and beta2 microglobulin.9

Oltenau et al.9 have shown that there is a correlation between the expression of CD200 and age over 65, with low levels of hemoglobin and LDH.
Also it has been described that by means of immunohistochemistry performed on bone marrow biopsies of patients with MM, 80% of the samples containing more than 50% of positive malignant plasma CD138 cells express CD200 in the membrane diffusely in various degrees of staining intensity, ranging from weak (+) to strong (+++).10

A prospective and comparative clinical study was conducted, whose main objective was to determine the expression of CD200 in cells from patients with MM; 35 patients were studied with a diagnosis of MM de novo who entered the Servicio de Hematología at the Hospital de Especialidades Centro Médico Nacional La Raza of IMSS from July 2008 to February 2010, and also 25 healthy subjects matched by age and sex.
Samples of peripheral blood in patients and healthy subjects were taken, and bone marrow in patients with MM. Nucleated cells were quantified in the automatic analyzer of the Coulter model blood counter (Immunotech, Marseille, France).

To evaluate the expression of CD200 on cells of multiple myeloma patients, staining was performed in a tube with antiCD138, CD38, and CD200 antibodies. Also, the region R1 of the cells of interest were selected from a graphic type dot plot of SSC-A versus FSC-A for total events (NO GATE).

For the determination of the CD200 protein in CD3 + lymphocyte cells in peripheral blood and bone marrow, staining was performed in a tube containing anti-CD3 and antiCD200.

The data obtained were analyzed using SPSS version 19. The differences between CD200 protein expression in peripheral blood lymphocytes of patients with MM and healthy subjects were analyzed with the Mann-Whitney U test.

Survival curves were generated by the Kaplan-Mier method, and differences between the curves were analyzed using the log-rank test.

Overall survival (OS) was defined as the time from diagnosis to death or last documented patient contact. A value of p <0.05 was considered significant for all analyses.

The clinical features of patients with MM are summarized in Table I and laboratory parameters in Table II.

A total of 25 patients (72%) with MM expressed positive for the CD200 protein on the surface of the plasma cells in percentage above 30%. The intensity of fluorescence was expressed heterogeneously.

No clinical differences were observed between patients with increased expression of CD200 protein, except for hypercalcemia (average serum calcium of 10 mg% in the normal CD200 protein, 10.6 mg% in high CD200). 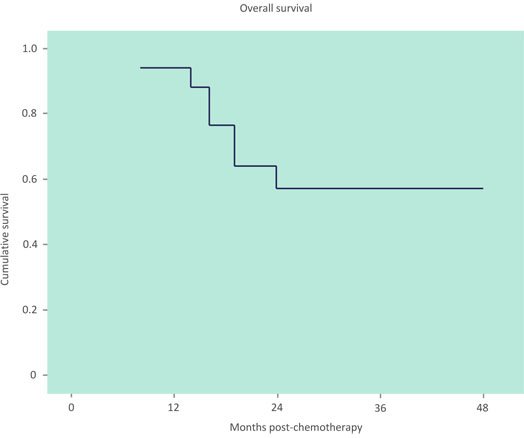 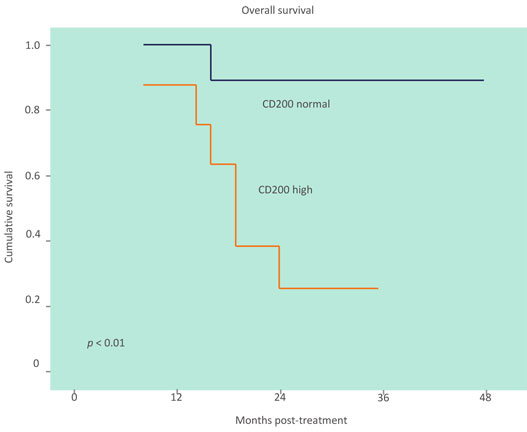 Of the donors who were classified as healthy, 22% expressed CD200 weakly in CD3 + T lymphocytes compared to 80% of bone marrow lymphocytes of patients with multiple myeloma.

Malignant cells expressing CD200 can interact through their CD200R receptor with type M2 macrophages and cause the secretion of IL-10, which is a cytokine that exerts an immunoregulatory action on cytotoxic T lymphocytes, which inhibits antitumor immune response.11

It has also been suggested that CD200 is a protein that is expressed in cancer progenitor cells (cancer stem cells) inducing resistance to chemotherapy and avoiding the antitumor immune response in multiple types of cancer such as prostate, breast, colon, and brain.12

Other authors have suggested that CD200 is present in mesenchymal cells of Wharton's jelly, cells possessing immunoregulator properties.13

In our study, CD200 was overexpressed in the plasma cells of patients, as reported by Moreaux et al.7 However, unlike the results obtained by these authors, we found that CD200 was significantly over-expressed in CD3 + bone marrow of patients compared to healthy donors.

The percentage of patients with CD200 expression may vary from 72 to 86% according to the laboratory method used, whether it be flow cytometry, immunohistochemistry, or gene expression profile. In our study it was 72%, similar to that reported by other authors.15-17

It is particularly important that in our study the MM patients whose malignant cells expressed CD200 had lower overall survival than those who did not express CD200. This finding has been reported by Moureaux et al.7 and confirmed by us.

Our study was conducted relying on a small number of patients (35), so it is suggested that the results be replicated in a cohort with a larger sample size.

In conclusion, the CD200 is a protein expressed in 72% of patients with MM and is an adverse prognostic factor in these patients. CD200 is also expressed in CD3 + T lymphocytes from bone marrow of MM patients, which may be another mechanism for evading the immune response.