Background: Current epidemiological transition from infectious to chronic-degenerative diseases is more and more demanding procedures requiring contrast medium, which turns out to be a risk factor for acute renal major damage in patients with chronic kidney disease. The aim of this article is to describe the frequency and evolution of Contrast-induced nephropathy in ambulatory patients with chronic kidney disease undergoing percutaneous coronary intervention.

Methods: We included patients with renal damage at the time of exposure to the contrast medium. They took a risk and were adjusted prevention measures follow at 48 hrs. Statistical analysis was performed using descriptive statistics.

Results: From 1236 cardiac catheterization procedure performed, 32 patients met the inclusion criteria. The 96.87% had chronic degenerative diseases such as diabetes or hypertension, overweight and obesity were a constant in 65.62% of cases, in 21.7% of patients the contrast dose was slightly higher than recommended. The 6.3% developed contrast-induced nephropathy with elevated creatinine greater than 25% at 48 hours after the procedure, despite preventive measures, however none of them required renal replacement.

Conclusions: The frequency of contrast medium-induced nephropathy in patients with high risk factors was lower than that reported in the literature; this may correspond to that in all cases nephrology assessment was performed before the procedure.

In Mexico, the epidemiological transition today from infectious to chronic degenerative diseases such as cardiovascular disease, makes for an increasingly large number of patients having interventional procedures in the area of ​​cardiology with the use of contrast medium, for both diagnosis and treatment.1 While in most cases contrast medium administration is safe, there are well-defined risk factors that increase the risk of contrast-induced nephropathy (CIN)2

CIN is defined as the absolute increase in serum creatinine by 0.5 mg/dl or an increase of 25% from baseline creatinine over a period of 48 hours after exposure to contrast medium without other identifiable causes.1,3-7 An incidence of 1 to 2% is reported in patients with no risk factors and 25-50% in those with associated factors, making it the third leading cause of hospital-based acute kidney injury only after hypoperfusion and medication toxicity.8-11 Based on studies by various authors, among them Taliercio, Rich, Crecelius and Gussenhoven it has been possible to determine the risk factors commonly associated with CIN, including minimal renal dysfunction (creatinine> 1.2 mg/dl); we have seen that those with serum creatinine > 1.5 mg/dl presented a risk 21 times higher than patients with normal renal function.1,4 Diabetes associated with kidney damage increases the incidence of CIN from 40-90% depending on the severity of the nephropathy.6 Volume of contrast medium is a modifiable risk factor, reportedly per 100 ml, the risk increases up to 12%, suggesting doses lower than 2 ml/ kg.1,6,12-14 Other factors include osmolarity, age, hypertension, acute myocardial infarction in the first 24 hours after contrast application, hemodynamic instability, use of aortic balloon pump during percutaneous procedure, some nephrotoxic drugs, and dehydration before contrast exposure.1,8,14 According to the risk scale of Mehran et al., the most important risk factor is previous kidney damage, putting patients in a high risk group.10

CIN can occur in all patients, with or without renal impairment; what changes is the risk of presenting. Some studies indicate that with low-risk patients, only between 0.44 and 0.8% required renal replacement therapy with dialysis, while those at high risk, that is, chronic kidney disease, up 5-10% will require dialysis temporarily and less than 1% require permanent dialysis.1,6 It has been reported that a slight increase in serum creatinine increases mortality up to 20% and predisposes one to impaired renal function over time, high costs and prolonged hospital stays.1,12,15 The most universally widely accepted measure until today for the prevention of CIN while performing imaging studies is adequate hydration before, during, and after the study, as demonstrated by Mueller, Trivedi and collaborators.1,4,6,7,16 But Merten showed that hydration with solution of 154 mEq of sodium bicarbonate administered by infusion at 3 ml/kg per hour 1 hour before the test and 1 ml /kg per hour for the 6 hours after is more effective than hydration with 0.9% saline (1.7 vs. 13.6%) because of the increase in urinary pH and consequent reduction in free radicals.6,17 Radiological iodinated contrast media are used annually in more than ten million procedures in the United States, and it is estimated that the probability of a person developing CIN who has one or more of the risk factors listed above is 20.7 to 23.3%; this risk is more than ten times that of a person with no disease base.1,8,12,15,18

A quasi-experimental, prospective, longitudinal study was conducted in the Hospital de Especialidades Centro Médico Nacional La Raza of the Instituto Mexicano del Seguro Social, in the Department of Hemodynamics.

32 ambulatory patients with serum creatinine > 1.2 mg/dl or glomerular filtration rate (GFR) <60 ml/min with functional class I and II were included, adjusting the dose of contrast medium to less than 2 ml/kg and Intravenous administration of bicarbonate solution of 154 meq and 5% glucose solution, 850 ml with administration at 3 ml /kg one hour before the event and 1 ml/kg for 6 hours thereafter. Contrast nephropathy was defined as an increase in the absolute value of serum creatinine by ≥ 0.5 mg/dL or relative value by over 25% within 48 hours of the procedure, so patients had appointments within this deadline for serum creatinine to be taken. Those who showed an increase received followed-up to verify that the damage was reversed by specific recommendations for each case.

1236 cardiac catheterization procedures were performed on patients with high risk for contrast nephropathy, and 32 of these patients met the inclusion criteria. The average age was 66 years. Among the most important risk factors was DM type 2 in 43.8% (14 patients), systemic hypertension in 84.4% (27) and patients with both 31.3% (10) (Table I). Only 34.3% (11) patients had known prior kidney damage. 15.6% (5) of patients had clinical stage 4/5 CKD and 84.4% (27) were in KDOQI clinical stage classification 3/5. 31.2% (10) had diabetes and hypertension (Figure 1). The dosage of contrast medium used fluctuated between 50 ml and 360 ml, with creatinine elevation interacting with dose-damage in a patient. 6.3% (2 patients) developed CIN with elevated creatinine greater than 25% at 48 hours after the procedure, but none of them required replacement of renal function. 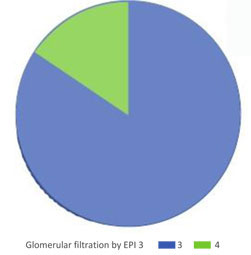 
The maximum elevated creatinine level in these patients was 1.6 mg/dl, which decreased within 8 days on average as reported in the literature (Table II). Of the positive cases, one reported double mitral lesion with LVEF 80%, obesity and hypertension; the latter, with high figures upon admission, chronic kidney disease KDOQI 3-5 probably associated with history of NSAID intake because of rheumatoid arthritis for 16 years, the calculated risk was 14%; the second, with clinical stage 3/5, had controlled hypertension, overweight and severe coronary lesion, required the use of twice the amount of contrast considered safe, both with 100% recovery at follow-up (Figure 2). Two patients underwent diagnostic and then therapeutic catheterization within 30 days, with increased nitrogen beyond the established time, reaching 2.2 mg/dl, but did not require replacement therapy and their development was satisfactory. 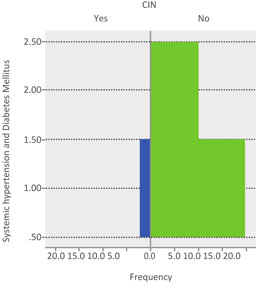 This study is the first to document the frequency of contrast nephropathy despite measures of prevention, in Hospital de Especialidades Centro Médico Nacional La Raza. In the hemodynamics unit, 300-400 catheterizations are performed per month, with an average of 13 operations a day, in which 80% of patients have associated comorbidities and a lower percentage have kidney damage, which varies with several factors including the place of origin, race, and associated comorbidities.19 The frequency of contrast nephropathy in patients with high risk factors was found in 2 patients of the 32 who agreed to participate in the study, this may imply that in all cases prior nephrology assessment was performed, allowing the adjustment of the dose of contrast medium used, calculated according to each patient's renal function and with kidney protection measures taken prior to the procedure.15,20,21 One should assume serum creatinine to be taken into account at 48 hours, but 20% may have elevated serum creatinine within 30 days of exposure.5,22 One should consider the risk-benefit of subjecting a patient with renal impairment to a second event, and if necessary, administer appropriate preventive measures as the damage done by contrast medium is dose-dependent and accumulative, particularly if serum creatinine ≥ 1.5 mg/dl, as the risk of contrast nephropathy increases 21 times, which has an impact on patient morbidity and mortality, in addition to days of hospital stay and hospitalization costs.23,24 It was found that most patients presented with uncontrolled systemic blood pressure, which results in endothelial damage which, although it is not taken as a risk for CIN, should be considered to help reduce injury that would lead to impaired renal function. Although the population has a high prevalence of comorbidities such as diabetes, hypertension and obesity, kidney function is preserved, however for those who have kidney damage only a minority is aware of it, so that a nephrology assessment is required prior to the event to get specific recommendations, to rule out prior AKI and to follow up after the fact.25

The frequency of contrast nephropathy was 6.3% lower than those reported in the literature. The most important risk factors were the amount of contrast media and the use of other nephrotoxic drugs. Recovery of renal function was 100% in all cases and no renal function replacement therapy was required. With this we can say that preventive measures for contrast nephropathy adjusted for weight and comorbidities are effective and that the amount of contrast is one of the risks that can be modified.