Background: Acute Silicosis was first described in 1900 by Betts. It’s also denominated as silicoproteinosis. It’s an infrequent way of pneumoconiosis which is produced when sandblasting.

Clinical case: 27 year old male who has been working for four years in a glass shop, etching them through sandblasting. Four years before with dyspnea on exertion rapidly progressing. Coughing spell, emetic and wheezing, with daily hyaline expectoration of 50 cc, yearly weight loss of 44 lbs and intense chest pain. Breathing rates 36X’. He was polypneic, with basal bilateral crackling rales. Thorax X-rays shows Mengeaux Festoon, right lung apex, rounded opacities between 3 and 10 mm in diameter, type 2/2 r/r in the ILO 2000 Classification. Opacities in the left lung flux to mix into a honeycomb shape type B silicoma. Cardiac silhouette frayed and Grade 1 Cardiomegaly. Dies five years after his condition started.

Conclusions: This kind of operations should be prohibited unless an industrial safety program using a Self-Contained Breathing Apparatus (SCBA) is applied.

Silica is one of the most abundant materials in the earth’s crust as Clark proved in a study where he states that 98.6 % of earth’s crust is composed by it.

Accordingly, silicosis is the most frequent pneumoconiosis in the world. This ailment is characterized by three different clinical forms that depend on the magnitude and therefore the percentage of free silica the workers are exposed to.

Silicoproteinosis was first described by Betts1 in 1900. After that there have been scarce publications about this ailment, always linking it to workers using sandblasters to polish metallic pieces or tombstones2-4 and also in the manufacture of denim pants.5-6 Acute silicosis or silicoproteinosis is a rare form of pneumoconiosis; emerges after massive expositions to breathable silica in short periods of time. Symptoms are quickly developed throughout few weeks characterized by fatigue, loss of weight, coughing and spitting up sputum, hemoptysis and chest pains of the pleural type.7 Those affected will quickly progress into dyspnea, cyanosis and fever of 99 ºF to 104 ºF. Surratt8 has informed of cases of acute silicosis complicated with spontaneous pneumothorax, glomerulonephritis and systemic lupus erythematosus. It can also be complicated with tuberculosis produced by typical as well as atypical strains.9

Buechner10 and Siskind2 have reported in some silicoproteinosis cases thickening of the alveolar region, infiltrated by mononuclear cells and positive tinting of the alveolar exudates by means of Periodic Acid Shift (PAS) just like the one observed in idiopathic alveolar proteinosis, though it’s not present in all cases. Radiographic alterations depend on the magnitude of exposure, duration and latency time.11,12 The conclusion is that primary alveolar proteinosis (PAP) and silicoproteinosis have a different clinical picture as well as radiographic alterations. PAP shows a “random” bilateral paved pattern, it is typical and not observed in silicoproteinosis which presents bilateral consolidation in the back of the lungs along with numerous centrolobulillares nodules. Calcification in consolidation areas is a common find.

Silicoproteinosis is a very serious disease and after four years of exposition, death occurs in less than a year. Next we will present a Mexican case.

A 27 year old male working in the glass business for the last seven years, first as a glass cutter for four years and then frosting glass through sandblasting for three years. His specific work consisted in frosting glass making it opaque using a cotton dust mask as personal protection equipment. He worked for 40 hours a week.

Four years ailment before his death he develops dyspnoea on exertion rapidly progressing, later, at rest. Coughing spell, emetic and wheezing, with daily hyaline expectoration of 50 ml, asthenia, adynamia and a yearly weight loss of 44 lb. The picture is completed by generalized joint pain predominant in the knee joint and intense chest pain mostly when finished inhaling.

On physical examination we found 130 lbs of weight, 5 ft 6 in height, blood pressure 90/60 mmHg, cardiac frequency 90x’ respiratory frequency 36´´, Temperature of 100 ºF. He was a male, thin, pallid and polypneic. Diminishing of thoracic mobility can be observed as well as breathing sounds and basal bilateral crackling at end of inspiration.

Echocardiogram: Enlargement of right cavities, data of light to mild pulmonary arterial hypertension with right artery systolic pressure of 55 mmHg. He was treated initially with anti-tubercular drugs (without first confirming the presence of acid alcohol resistant bacilli) and bronchodilators.

In the first radiographic of the thorax, a loss of soft tissue with skin adjoined to the rib cage may be observed. Is also present the elevation of the right hemi diaphragm which is characteristic of the pneumoconiosis with tent morphology (Mengeaux Festoon), the right lung’s joint presents rounded opacities between 3 and 10 mm in diameter, type 2/2 r/r in the ILO 2000 Classification. Opacities in the left lung flux to mix into a honeycomb shape type B silicoma of 2 inches and a third of the lung field. Frayed Cardiac Silhouette and Cardiomegaly grade 1 (figure 1). In the left lateral there’s a decrease of retroesternal air with honeycomb shaped images and opacities 2/2 q/q and fluxing type B images in the ILO 2000 Classification, the flux of honeycomb shaped images can be observed in the middle region of both lungs, the right hemi diaphragm is too high due to the Mengeaux Festoon

Three months after, in the control X-ray, silicosis with thoracic convexity to the right can be observed as well as signs of pulmonary hypertension. The opacities cover the whole pulmonary field and fluxing images can be observed in the middle portion of the right hemi thorax in comparison with the previous X-ray. The left hemitorax has a larger flux of the opacities which is classified as C. The CT Scanning shows bilateral images in “polished glass or patches”, also a linear reticular pattern, cystic image, nodular images of 3 to 10 mm in diameter and bullas confluent (figure 2). 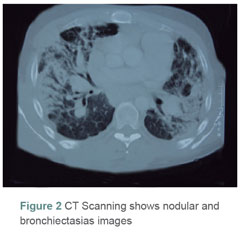 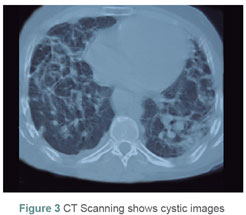 Spirometry shows: mixed pattern of severe grade with predominance obstruction due to a Tiffeneau index of -9 (table I). It was without significance response to bronchodilatador. A collapse of peripheric airways detected in post bronchodilatador test, owing to the dynamic compression induced by the forced vital capacity maneuver. Gases shows: PaO2 48 mmHg, PaCO2 30 mmHg, pH 7.41.A severe grade of hipoxemia is concluded (table II). 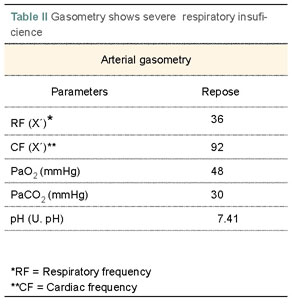 Silicoproteinosis was qualified as a work-related illness and was valued with a 100 % total permanent disability by the article 514 of the Mexico’s Federal Labor Law six months before his death.

There is no specific treatment for Silicosis, but a unique way of treating Silicoproteinosis.

Broncoalveolar lavage can be performed to remove the produced alveolar protein material, which improves the symptoms but not the prognosis. Also, if present, treatment for tuberculosis, lupus or glomerulonephritis yields bad results. Moreover an orthotropic lung transplantation is difficult to perform in sub-developed countries due to the low availability of organs as well as the high costs involved (4 to 5 million Mexican Pesos for the surgical operation and 3.5 million for post-operative expenses during the first year). Abbaj13 states a survival rate of two years after the transplant, staying practically all of the time in-hospital.

If the immune response of the receiver of the allogenic graft is normal, the transplant is rejected almost invariably despite general immunosuppressant and reduction to a minimum in the intensity of the response. There is also a risk of developing large B cell lymphoma and squamous cell carcinoma on skin due to the administration of immunosuppressive drugs such as Cyclosporine, FK-506 and rapamycin.

Once again, the importance of prevention through measures of Industrial Safety is clear,14-16 as there is no specific treatment for none of the pneumoconiosis and despite of removing the worker immediately away from the source of exposition, silicosis is progressive.

For all this reasons the jobs involving the use of sandblasting should be regulated so that adequate respiratory protection equipment utilization closed and with independent air in line will be mandatory. Also these jobs will be reduced to the extent possible.

Although health surveillance and epidemiological monitoring are needed, it is indispensable to count on Industrial Safety systems which are able to diminish or, if possible, avoid risk of acquiring any of the ailments produced by the exposition to inorganic dusts, achieving to keep their levels below the maximum levels allowed Threshold Limits Value (TLV) by the international laws as well as the Official Mexican Standard (NOM-STPS-010-1999) among others.