Background: Survival of children with pineal region tumors has increased significantly in the last decade; these tumors have an insidious outcome associated with endocrine disorders with high morbidity and mortality, especially after gross resection. The objective was to report the survival, outcome, morbidity and mortality according to type of surgery, histology and treatment in children with pineal region tumors.

Methods: This retrospective study included all patients of 17 years or less with diagnosis of pineal region tumor, who went over a period of 10 years to a children’s hospital. A histopathological review was made, and the extent of resection was determined. The survival was also estimated.

Conclusion: Pineal region tumors in children can be treated with diagnostic biopsy, followed by adjuvant treatment consisting of chemotherapy and radiotherapy.

Although the survival of children with tumors of the pineal region has increased significantly in the last decade, they are generally associated with endocrine disorders, especially secondary to surgical resection, and induce high morbidity and mortality in these patients.1

The pineal gland is an organ derived from the roof of the diencephalon that develops during the second month of gestation. This gland functions as a neuroendocrine transducer that synchronizes hormone release with the phases of light and darkness.1,2

As a result of the histological variability of the various components of the pineal region, there is a broad representation of tumors that can develop in the region.1-3

Tumors of the pineal region are more common in children than in adults and they account for between 0.4 and 2% of central nervous system (CNS) primary tumors in children. They are more common in children between 1 and 12 years and are presented more in males, with a ratio of 3 to 1. The tumors in this region have a wide histological variability can arise from three sources of cells: cells of the pineal parenchyma (17%), the glial tissue surrounding the pineal gland or ectopic embryonic tissues (15%), and totipotent stem cells (40-65%) that migrated to this region during embryogenesis. Each type has different biological characteristics and behavior.2,3

Tumor markers are especially useful in the diagnostic testing of patients with germ cell tumors, which maintain the molecular characteristics of their embryonic origin and can sometimes express proteins such as alpha-fetoprotein and beta fraction of human chorionic gonadotropin (beta-HCG).

In the study of tumors of the pineal region, it is crucial to do neuroimaging to evaluate their morphological characteristics, size, vascularity, and surrounding anatomical relationships.1,3

The pineal gland is a medial deep brain structure, surrounded by a major arterial and venous vascular network and vital central brain structures. Therefore, the surgical approach to tumors of the pineal region is highly complex.3

Because of the high morbidity and mortality rates observed with the surgical treatment of tumors of the pineal region, Torkildsen proposed in 1948 the conservative treatment of these tumors by CSF shunt and radiotherapy, reserving surgical removal exclusively for radioresistant tumors.3

The management of tumors of the pineal region now depends on accurate histological diagnosis, although in a large percentage of these lesions (nearly 61%) treatment is initiated without diagnostic confirmation, since the depth of the tumor and the presence of adjacent vital structures constitute a difficulty for surgical treatment, in addition to the neurological and neuroendocrine sequelae noted, so performing only lesion biopsy or even conservative treatment is preferred, performing imaging diagnosis and confirmation of tumor markers in the peripheral blood or CSF, with conservative treatment and bypass surgery when there is hydrocephalus, radiotherapy, and adjuvant chemotherapy.6-13

Total resection varies between 8 and 83% in studies of the pineal region, although imaging techniques and surgical methods for the treatment of the central nervous system continue to improve. However, surgical limitations and postoperative sequelae in these tumors remain, so it is valid to diagnose these patients via tumor markers and imaging.14-19

This study was conducted at the Hospital de Pediatría of the Centro Médico Nacional Siglo XXI of the Instituto Mexicano del Seguro Social in Mexico City. It included all patients aged 17 or younger who were diagnosed with tumors of the pineal region in a period of 10 years.

All patients were diagnosed by histopathological examination of the material obtained during surgery (biopsy or resection). The extent of resection was determined from the procedure report and postoperative images.

The slides were reviewed by a neurologist blinded to the clinical course of patients.

The histopathology, the potential for metastatic spread, and tumor grade were taken into account when calculating the dose and extent of radiation administered in the skull or spinal axis.

The mean and median values were calculated ​​based on the demographic characteristics of the patients. The Kaplan-Meier method was used to estimate overall survival, and a comparison of the survival curves for the different groups was performed by log-rank test.

Of 46 patients with the diagnosis of tumor of the pineal region who were treated at the Hospital de Pediatría of the Centro Médico Nacional Siglo XXI over a period of 10 years, 36 had a complete medical history and appropriate histopathological material available for review; the remaining 10 patients had incomplete clinical data, so they were excluded from this retrospective study.

The results of the histopathological review were: germ cell tumors in 26 patients (72%), pineal parenchymal tumors in eight (23%), and glial tumors in only two patients (5%).

Adjuvant chemotherapy was administered to the 36 patients, according to the following chemotherapy regimens: the 34 patients diagnosed with germ cell tumor and pineal parenchymal tumors (94.4%) received the ICE regimen (ifosfamide, carboplatin, and etoposide), and the two patients with glial tumors (5%) were given the regimen including carboplatin plus vincristine.

Radiotherapy was given to 32 patients (88.8%) with doses between 24 and 54 Gy, according to the location, histology, and spread of their tumor; the other four (11.1%) patients were not candidates because one was less than two years old, and three had postoperative complications leading to death within four months after surgery.

Regarding patient status, 14 deaths were reported (38.8%), of which five (35.7%) were secondary to electrolyte imbalance, and the other nine (64.2%) secondary to tumor progression.

According to tumor histology, among patients with germ cell tumors and pineoblastomas, the two most common types of pineal tumors, overall 10-year survival found in this retrospective study was 72 and 24% (p = < 0.05), respectively, so there was a significant statistical association. Two cases of astrocytomas of the pineal region were identified, one died and the other is alive at 10 years.

10-year overall survival between patients treated with total resection or partial resection versus biopsy was 52 and 75%, respectively (p = 0.7), without a statistically significant association.

Tumors of the pineal region represent only 0.4 to 2% of all CNS tumors. They occur most frequently in the first decade of life, which is consistent with the study.

The world literature reports that pineal tumors have a male-female ratio similar to that found in the unit, but this study reported a 2:1 predominance of males.

The percentages in frequency according to the histology of tumors of the pineal region were similar to those reported in the literature (72% germ cell tumors, 24% pineal parenchymal tumors, and 5% astrocytomas).

The symptoms that patients presented were related to impaired flow of cerebrospinal fluid, visual disturbances, Parinaud syndrome, diabetes insipidus, and diencephalic symptoms, which is consistent with international reports.

Many patients with tumors in the pineal region present signs and symptoms of obstructive hydrocephalus and this often requires either ventricle bypass or endoscopic third ventriculostomy, which is often the only surgery performed in these patients because of surgical difficulties and sequelae from surgery.

Other centers specialized in tumors of the pineal region perform surgical resection in between 8 and 83% of the cases, which shows that there is a dispute as to whether or not to perform resection of the tumor, either partial or total, due to the morbidity brought by such treatment. In the present study, partial or total resection was performed in 66.6% of patients.

We found that in 10 (76.9%) of the 13 (36.1%) patients who presented pituitary dysfunction with neuroendocrine disorders, total removal of the tumor was performed, which is clinically important because increased morbidity occurs secondary to the surgical procedure. Although a statistically significant association with survival was not found, we did find increased morbidity associated with aggressive surgical treatment (Figure 1). 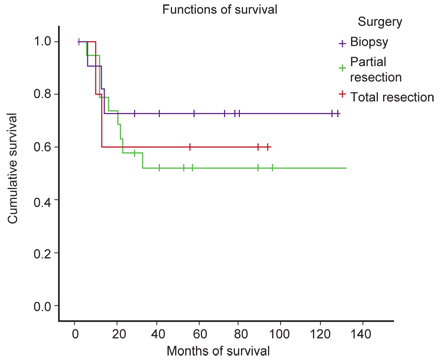 
We believe that low morbidity and fewer permanent side effects are the main goal of treatment of childhood cancer, so treatment should be as aggressive as possible; in tumors of the pineal region in children, only a diagnostic biopsy can be performed followed by adjuvant chemotherapy and radiation therapy, to which these tumors have a good response, and which allows decreased side effects of aggressive surgery. Also, in cases where the diagnosis can be made with tumor markers and imaging studies, we should refrain from performing biopsy and begin treatment as soon as possible, to reduce the consequences due to aggressive surgical treatment.