Communication with: Alberto I. Villa-Manzano


Background: Nosocomial infections in intensive care units are a health problem worldwide due to their incidence, prevalence and clinical impact. The objective of this article was to describe the trend of antimicrobial susceptibility during a 10-years period in both a pediatric and a neonatal intensive care unit.

Conclusion: There is an alarming loss of effectiveness in antimicrobial agents.

The treatment of common infections is based on subjective judgments, and the use of antimicrobials is supported by the diagnosis, epidemiology, the most likely etiology, and the antimicrobial sensitivity profile of the pathogen involved, which varies widely depending on geographic region, and even between hospitals in the same country and city.1 This, combined with the lack of research, obscures the prospects for resolving community- and hospital-acquired infections, and increases bacterial resistance. The World Health Organization (WHO) considers antimicrobial resistance as a priority problem and proposes continuous updates according to reports from epidemiological surveillance systems.2,3

Infection in intensive care units represents a global public health problem due to its incidence, prevalence, and clinical impact; it is therefore one of the leading causes of death worldwide. Mortality is between 14 and 80% depending on the source of infection, the pathogen responsible, the site of acquisition, and antimicrobial sensitivity. Patients admitted to intensive care units are between five and 10 times more at risk for nosocomial infection than patients in other areas.4,5

Identifying pathogens in hospitals is part of the measures to reduce antimicrobial resistance in these centers.6 The epidemiological profile of infections in intensive care units has changed in recent years, and it is related to host characteristics and associated risks that predispose patients to severe infections caused by opportunistic and multidrug-resistant pathogens.7

Antimicrobial sensitivity is variable, and periodic studies must be conducted to support their use. There are few studies, so the prescription of antimicrobials remains empirical and based on information from studies that do not correspond to local reality.

The Hospital General Regional 110 of the Instituto Mexicano del Seguro Social is a hospital of reference in western Mexico. The pediatrics department has a neonatal intensive care unit (NICU) admitting 249 patients on average annually, and a pediatric intensive care unit (PICU) admitting 179 patients on average annually. The NICU admits only babies born at the hospital and that have had no contact with the community, and the PICU admits patients from 0 to 15 years from the pediatric emergency department at the same hospital and other hospitals; these patients are mostly neonates and infants.

The study was designed as a cohort follow-up based on results from the microbiology laboratory of the hospital mentioned, in the period from the opening of the hospital in November 2000 through December 2010. The results were collected from all cultures made on children admitted to the pediatric and neonatal intensive care units.

Positive cultures were identified by conventional biochemical tests. From November 2000 to October 2003, samples were made through the process of dilution with manual adjustment of inoculum to reach the standard turbidity equivalent to 0.5 on the McFarland scale.8 Starting in November 2003, the automated system MicroScan® Walkaway 96SI was used, and sensitivity results were determined by microdilution using the Prompt-D inoculation system, considering strains to be sensitive or resistant based on the minimum inhibitory concentration, determined by NCCLS parameters (National Committee on Clinical Laboratory Standards).9

For statistical analysis, the etiologic agent, the most prevalent diseases, and the antimicrobial used were considered as independent variables. The three main admission diagnoses were considered for analysis by pathology, as well as the 10 major etiologic agents found (four Gram positive bacteria and six Gram negative bacteria), and the total of antimicrobials reported in sensitivity testing.

The dependent variable was antimicrobial sensitivity at the beginning and end of 10 years of follow-up.

Gram sensitivity was determined by grouping the first five years compared with the last five years of follow-up. The data from the two ICUs were analyzed separately and jointly.

The incidence of initial and final sensitivity of the etiologic agent, and the most prevalent diseases and antimicrobial were compared using chi-squared with Fisher’s exact test. Statistical significance was considered with two-tailed p of 0.05. Analyses were made using SPSS statistical software version 8 and Epi-Info version 0.6.

The work was approved by the hospital’s research committee (register R-2009-1303-8), and the use of information was strictly for scientific purposes, maintaining at all times the patient’s right to anonymity and confidentiality.

Figure 1 shows a clear decrease in antimicrobial susceptibility, with an initial global average of 66% and a final sensitivity at 10 years of 45%, which represents an overall sensitivity loss of 13% (p = 0.002). 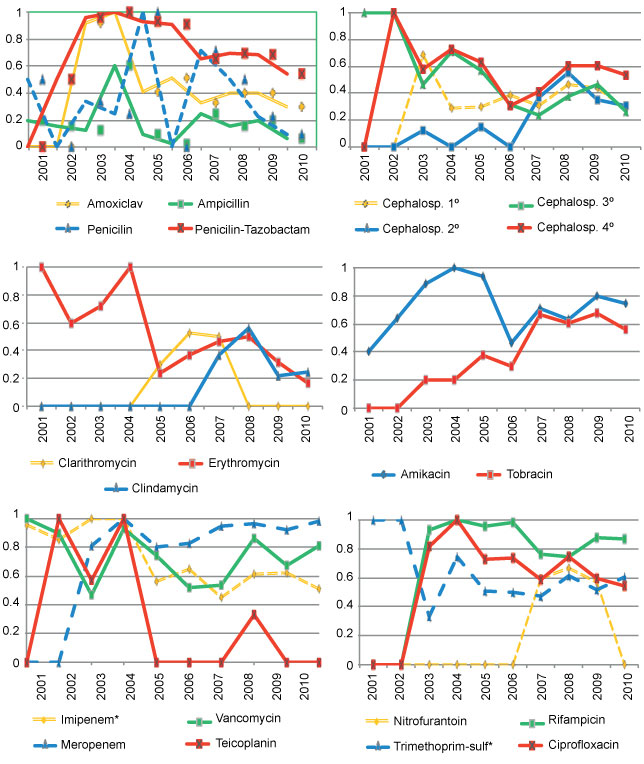 The antimicrobials that maintained sensitivity were: ampicillin, clarithromycin, erythromycin, penicillin, piperacillin tazobactam, vancomycin, meropenem, and rifampicin, with a p-value that was not significant.

When comparing the sensitivities of Gram positive and negative agents, we found no significant changes in the overall sensitivity at 10 years, but it is worrisome that this tended to decrease. Regarding Gram positive cultures, only one in three was antimicrobial-sensitive, and for Gram negative cultures one in two.

The present study documented a worrying loss of antimicrobial effectiveness to the agents causing infection.

The most common causes of infection documented in the NICU and PICU were: sepsis, pneumonia, urinary tract infection, omphalitis, and meningitis. The incidence and frequency order of the main causes of admission to the pediatric intensive care units vary in different reports, but sepsis and infections of the respiratory tract, central nervous system, surgical, and urinary tract remain constant.10,11

The greatest loss of sensitivity was observed in the antimicrobials used to combat sepsis (the primary diagnosis in our study). This coincides with multiple publications, which also state that the pathogens causing sepsis are a rare mixture of microorganisms, observed both in developed and developing countries, and that this pathology’s resistance to first-line antibiotics has increased considerably.12

The incidence of nosocomial infections in the PICU varies between 11 and 35% in our country and the world.13-15 The present study showed that 13% of cultures with confirmed positive diagnoses were for nosocomial infection, a result within the expected parameter.

S. epidermidis was the most frequent pathogen. Some authors report that in Mexico it represents one of the main etiological agents of nosocomial infections in pediatric services and the PICU.16-18

Other significant pathogens identified were S. aureus, S. haemolyticus, Enterococcus faecalis, and Gram negative pathogens such as E. coli, Pseudomonas aeruginosa, Klebsiella pneumoniae, Enterobacter cloacae, Citrobacter freundii, and Acinetobacter baumannii. This great variety coincides with the epidemiology reported in PICUs.19 Gram negative agents are identified as causing the greatest incidence of infections in PICUs in developing countries,20,21 unlike developed countries where Gram positive agents cause infections more frequently in these areas.22 However, it is striking that in our country there is evidence of increased incidence of Gram positive agents,16 as also documented in our study. One could consider that the increase in Gram positive agents could be explained by the fact that invasive procedures often are carried out in ICUs.

Although there are changes in the frequency of these microorganisms, there are constants like Gram positive bacteria such as coagulase negative S. aureus and enterococci, and Gram negative such as E. coli, Pseudomonas, Klebsiella pneumoniae, and Acinetobacter baumannii; the latter is emerging as a cause of bacteremia associated with the use of contaminated fans and humidifiers.23 Candida has been identified with some frequency. This variability in results could be due to the geographical region studied, the characteristics of the population itself, and the hospital environment.24,25 The pathogens identified in our study did not differ greatly from what has already been reported.

We documented that the sensitivity of some antimicrobials significantly decreased over the 10 years. Such is the case of first-generation cephalosporins (ciprofloxacin, erythromycin, imipenem, and trimethoprim with sulfamethoxazole). These results are analogous to previous reports that showed considerable and significant reduction in sensitivity to sulfamethoxazole, erythromycin, and first-generation cephalosporins.26-28

In our study when making a Gram analysis, some antimicrobials significantly decreased sensitivity. In the Gram negative, reduced sensitivity was identified in amikacin and trimethoprim with sulfamethoxazole; these results confirm the statements in previous reports.21,29

In Gram positive agents, we identified a significant decrease in the sensitivity of first-, third-, and fourth-generation cephalosporins, which also coincides with reports in the literature.30,31 Some antimicrobials increased their sensitivity, such as piperazine/tazobactam, second-generation cephalosporins, quinolones, piperacillin, and amoxicillin/clavulanate. There are similar studies whose results are consistent with our findings. This may be happening because these antimicrobials are not used frequently in pediatric patients.31-33 The use of quinolones in children is only considered as an alternative for select situations such as infections with P. aeruginosa or multidrug-resistant strains, in which potential benefits and risks are weighed.34 Vancomycin, meropenem, and rifampicin maintained their sensitivity, which could be explained by their use according to established institutional guidelines.

The downward trend in antimicrobial susceptibility is linked to their indiscriminate and inappropriate use.35 There is currently an effort to reduce the phenomenon of antimicrobial resistance through their cyclical use,38,39 analyzing how long their administration lasts,36 and the impact on the health worker who uses them. There is also an effort to raise awareness on the prophylactic use of antimicrobials.37

The scarce use of some antibiotics in pediatrics, such as quinolones, monobactams, and glycopeptides, can become a strategy to increase the sensitivity of other antimicrobials. In addition, as discussed by several authors,40-42 it is advisable to perform blood culture before establishing antimicrobial management; not to use broad-spectrum antimicrobials indiscriminately; to develop national and local policies to restrict the widespread use of antibiotics;43 to have a reliable laboratory verify microbiological cultures; not to diagnose sepsis only with the results of acute-phase reactants; to discontinue the use of an antibiotic on the third day if a blood culture is negative; to avoid antibiotics for long periods; and to remember that health staff is essential for preventing nosocomial infections;44-46 to strengthen infection control; and particularly to encourage hand-washing.

Doing a prospective study helped us observe the change in antimicrobial sensitivity, which is one of the main strengths of the study and which provides useful information for decision-making on the use of antimicrobials.

The worrying loss of utility of antimicrobials should lead us to establish continuous monitoring of susceptibility patterns to determine the trend and implement interventions to achieve the rational use of these medicines.