Background: Maternal depression entails cognitive, behavioral, affective and relational disorders with a great impact on the life quality of individuals, society and family. Our objective was to determine the prevalence and factors associated in women with children in paedopsychiatry treatment in a children’s hospital.

Methods: Descriptive, prospective and prevalence study with a sample of 194 women. We used Beck scale. We calculated the prevalence rate. We analyzed the association of risk factors with the maternal depression by using chi square and a relative risk with a 95 % confidence interval (p = 0.5).

Conclusion: There was a higher prevalence than expected with a percentage difference of 6 points. Mild depression was more common; women from 31 to 40 years of age, married, and with five children were the most affected groups.

Depression is a disorder that affects millions of people worldwide. According to the World Health Organization (WHO), an estimated 120 to 200 million suffer from it, which corresponds to 3% of the world population, including varying degrees of disability; of these, less than 5% of patients receive effective treatment. Maternal depression is a serious public health problem because of its negative impact on both mothers and their children, which results in cognitive, behavioral, affective and attachment disorders.1

Overall rates of depression are higher among single and divorced people than among married people. Factors associated with major depression are more common in minority groups with higher disease burdens, lack of health care resources, and low socioeconomic status; however, depression may occur at any socioeconomic level. The nature of this association is unknown; more recent studies even show that an unfavorable socioeconomic position in childhood is associated with an increased risk of depression in adult life.3 It has also been proposed that factors such as crime, unemployment, drug abuse, family breakdown, overcrowding, adultery, and stressful life events can be triggering.4

Longitudinal studies in the world have also revealed systematic links between episodes of loss, especially parental separation or death, and an increased risk of depression during adult life.5 Traumatic life events (e.g., neglect) can cause a closer relationship with anxiety disorders.6,7 Studies have also consistently shown that having a history of any mental disorder at any time of life considerably increases the risk of onset of major depression and the probability of persistence, severity, and recurrence of the disorder.8

Stressful life events are among the best documented risk factors for major depression in adults in the general population; they have been consistently linked as triggers of depression.9 There are lines of research that point to an interaction between life events and genetic/family vulnerability to depression, coping styles, and personality traits.10 More recently, studies of early environmental factors have further identified the role of prenatal exposure to maternal anxiety with emotional disorders of children, even identifying it as subclinical.11-13

The Encuesta Nacional de Epidemiología Psiquiátrica (ENEP) used as target population the non-institutionalized population aged 18-65 living in urban areas. The weighted response rate at the household level was 91.3% and at the individual level, 76.6%. It showed that women have higher overall prevalence for any disorder (14.8 and 12.9%).14

The aim of this study was to determine the frequency of depression in mothers of patients attending the Servicio de Paidopsiquiatría, and risk factors associated with this condition in the Hospital de Ginecología y Pediatría 48 of the Instituto Mexicano del Seguro Social, in Guanajuato, Guanajuato, México.

This is a transversal and descriptive prevalence study in the outpatient child psychiatry service of the  hospital mentioned. The sample consisted of 203 women to whom the Beck scale for the diagnosis of depression was applied, classified as mild, moderate, and severe. A questionnaire was applied that included the following variables: mother's age, marital status (single, divorced, married, cohabiting, separated, widowed), schooling (elementary, middle, high school, undergraduate, graduate, illiterate), number of children, occupation (homemaker, laborer, employee, professional), family type (nuclear, single parent, extended, mixed) and the diagnosis of the child who attended the child psychiatry service (mental retardation, learning disorder, generalized developmental disorder, attention deficit hyperactivity disorder, and other behavioral disorders, such as substance use disorders, anxiety disorder, schizophrenia, and developmental delay). Mothers who attended the outpatient child psychiatry service for the first time and subsequent times were considered. Nine patients were excluded for the following reasons: they had incomplete answers in the questionnaires, the mother had experienced a loss in the last two months (death, loss of status or work), or having previous diagnosis of depression or postpartum depression. The final sample was of 194 women who met inclusion criteria: being the biological mother, over 18 years old, literate, and consenting to participate in the study by signing the informed consent.

The information was captured in an Excel database and codified to facilitate statistical analysis. EPIDAT 2004, version 3.1 OPS, was applied to obtain chi-squared, with Yates correction for the p-value. Chi-squared was applied with a 95% confidence interval and an alpha of 0.05 with one degree of freedom; therefore, a tabulated chi-squared of 3.842 was expected. Odds ratio (OR) was applied to establish an association of risk factors with the presence of depression in the study group. The prevalence rate was deduced: the number of mothers with depression per one hundred of the total number of mothers participating in the study; the results are presented in tables and graphs.

As for schooling, it was observed that the percentage with the highest frequency was high school with 29.5% and secondary with 26%.

Regarding marital status, the highest percentage was of married women with 54.3% and women cohabiting with 22.1%.

Maternal occupation presented the following distribution: 63 mothers were homemakers (32%), 29 were laborers (15%), 81 were employees (these had the highest percentage: 42%), and 21 were professionals with 11%. 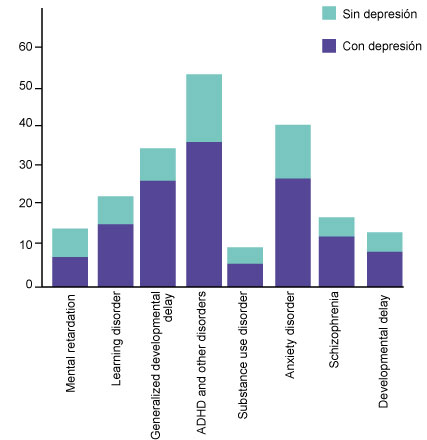 
A prevalence of maternal depression of 66% was obtained in the mothers of children attending the child psychiatry service. These were classified as mild depression in 45% (58), moderate depression in 35% (45), and severe depression in 20% (25). 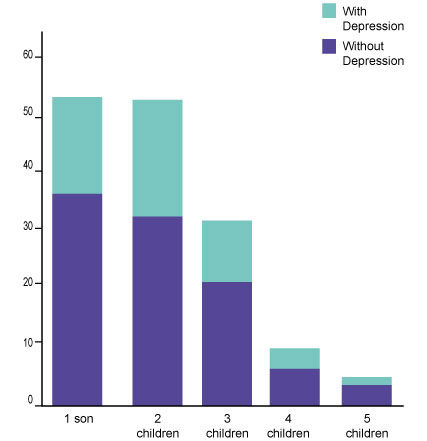 Figure 2 Relationship of number of children with the presence of maternal depression. Source: data collection sheet with Beck scale applied in the study.

A study conducted at Harvard University in Boston, Massachusetts, mentioned several factors that can predispose a mother to developing depression: a disintegrated family, being single or separated, or working outside the home;16 however, our study identified that being married and being a housewife are the factors that most affected mothers to develop depression.

Although the literature mentions that the mothers or women most affected by the pathology of depression are young women, with an average age of 21 (this according to studies conducted in the United States),19 our study noted that the population of women in middle age was the most affected, with the average age of 33.5 years.

A Canadian study by the Centre for Addiction and Mental Health and the Department of Psychiatry at the University of Toronto, shows that, compared with those who are married, single mothers are more likely to have an episode of depression as well as increased stress and a greater number of problems in their children’s health;24 conversely, our results show that in the Mexican population being married is a risk with a ratio 2.4 to 1 for the status of developing depression.

As for employment status, mothers who are currently working within a company or other labor activity are those with increased risk of depression, as reported by two studies in the United States,23,26 which observe that a working mother has a 50% higher risk of depression compared to a mother who is not working. Our study found that mothers who had a profession and those who work in the home are those with an increased tendency to develop depression.

Regarding educational level, it would be expected that a lower level of schooling would find a greater presence of depression and vice versa, as noted by the study in our own country by the Universidad de Guadalajara.27 Our study shows that the largest percentage of mothers who are depressed have basic primary education or a higher degree of studies, such as a college degree.

Although there is no information found in the literature about the relationship of the type of family that a mother has, our study shows that the nuclear family type is the area with the most psychiatric disorders corresponding to depression, followed by the single-parent family.

According to the hypothesis in this study, a prevalence of 60% was expected and higher prevalence was obtained with a difference of 6 percentage points. The depression most frequently encountered was mild depression, the most affected age group was 31 to 40 years old, in the married group, and with a number of five children.

In our country and in our institution there is no information about the mental state of mothers who have a child treated in the child psychiatry service. Such studies are necessary to detect and prevent in a timely manner any disorder in relation to maternal depression as a result of being a caregiver of chronic patients in order to improve the quality of care.