How to cite this article: Espejel-Huerta D, Antillón-Ferreira CA, Iglesias-Leboreiro J, Bernárdez-Zapata I, Martínez-Ramos Méndez A, Rendón-Macías ME. Indications for the use of continuous subcutaneous insulin infusion in pediatric patients with type 1 diabetes mellitus. Rev Med Inst Mex Seguro Soc. 2016;54(1):64-9.


Background: Diabetes is a serious health problem for pediatrics. In pediatric patients control depends on correct insulin administration. The most usual is subcutaneous administration according to the glycemic control. The aim was to analyze the indications for continuous subcutaneous insulin infusion (CSII) in type 1 diabetes mellitus (T1DM) children and adolescents.

Methods: It was carried out a descriptive study in patients from 1 to 16 years with T1DM who underwent CSII therapy. The main cause to use this therapy was analyzed, and also if that cause was different regarding age, sex and disease progression.

Results: 61 patients underwent CSII therapy. The median age at the beginning of treatment was 9 years old; 43 patients (71.6 %) had more than one year of diagnosis. The main reasons to use CSII were: 42.6 % had to improve their quality of life, 34.4 % had to reduce the high glycemic variability, 13.1 % had to control severe recurrent hypoglycemia, and 9.8 % had to control their HbA1c. For children under 6 years of age (n = 14) the more frequent indication were recurrent hypoglycemia and to improve their quality of life; children from 6 to 12 years of age (n = 27) had to improve their quality of life, and in children over 12 years CSII was indicated for high glycemic variability and severe recurrent hypoglycemia. There was no different indication related between sexes.

Conclusion: Improve their quality of life and reach a better glycemic control were the main reasons to start CSII in our patients.

Diabetes mellitus (DM) is a public health problem for pediatrics. Its care focuses on both prevention and glycemic control to improve the quality of life.1,2 According to the recommendations from the study "Diabetes Control and Complication Trial", good metabolic control can prevent or delay the onset of micro and macrovascular complications, which can begin in the pediatric age range.1,2 At that age, in which insulin-dependent diabetes is predominant, control depends on the proper administration of insulin, and the most common management is subcutaneous administration at set times and intermediate doses according to glycemic control (always with the risk of noncompliance). Since the seventies the possibility of using microinfusors has been considered.3 In recent years, new devices for continuous subcutaneous insulin infusion (CSII) in school-age children have shown promise for good control;4-6 these devices are determined by low levels of glycosylated hemoglobin (HbA1c), reduction of severe hypoglycemia, and improved quality of life assessments.7,8 These results have even encouraged its use in infants and pre-school children.9,10

In developed countries, its use has been primarily aimed at patients who meet the following criteria regardless of age:10,11

Moreover, in some countries like the UK, the presence of gastroparesis is also considered.11

On the other hand, the use of CSII in developing countries (such as Mexico) has been limited, partly because of the cost of the pumps, the limited information on experience in its use, and the absence of clear indications tailored to our population.

The aim of this work was to describe our experience deciding to apply CSII to children based on their age, sex, duration of diabetes, and glycemic control at initiating infusion.

The design was a descriptive study of 61 patients treated in outpatient, diagnosed with type 1 diabetes mellitus according to international criteria (American Diabetes Association, European Association for the Study of Diabetes).5,11 All patients were reviewed to see if they met certain criteria to begin management with CSII, according to the American Academy of Clinical Endocrinologists (AACE) and the American Academy of Pediatrics (AAP).4,5 After informing patients (over six years) and their families about the objectives, benefits, and possible risks, they were asked for their informed consent and assent. Prior to placement to begin CSII, serum HbA1c levels were determined, measured by high-resolution liquid chromatography (Variant II BIO-RAD). The device placement was performed in the office.

The following information was obtained from each patient: sex, age, and years of development of diabetes mellitus.

For statistical analysis, the main reason for the indication to initiate CSII was determined for each patient according to AACE and AAP criteria. In particular the quality of life was assessed by joint perception of parents and child, when the child was able to express it (when they were more than six years old). Indications were analyzed by sex, age (categorized in: less than six years, six to 12 years, and more than 12 years) and time of development (categorized in: less than one year, one to three years, and four to 14 years). Data were summarized in simple and relative percentage frequencies. The nonparametric chi-squared test was used for comparison between the reasons to initiate CSII and the factors discussed. A p < 0.05 was considered statistically significant.

We had almost the same number of males and females who initiated CSII. The median age was 9 years 8 months (from 1 year 10/12 months to 16 years) at the time of placement of the insulin infusion pump. The time of development of diabetes was variable, the largest proportion (44.3%) with 1 to 3 years. 82% (50 of 61) had HbA1c > 7.5% at the time of initiating CSII (Table I). Teenagers were the group that showed the highest levels of HbA1c before initiating CSII (Figure 1). 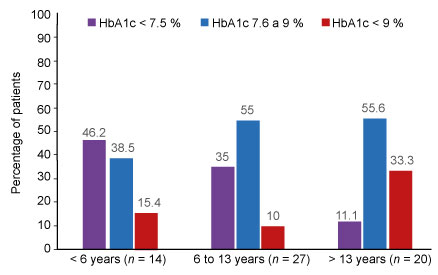 Figure 1 Distribution by age group of glycosylated hemoglobin levels before initiating continuous subcutaneous insulin infusion therapy (n = 61). The value of chi-squared was 6.8 (with 4 degrees of freedom), with p = 0.14


Regarding the main reasons for initiating CSII, 42.6% (26 out of 61) did it out of desire to improve their quality of life, 34.4% (21 out of 61) to reduce a significant glycemic variability, 13.1% (8 out of 61) to control recurrent hypoglycemia, and 9.8% (6 out of 61) to achieve goals for managing their HbA1c level. No patients were indicated infusion due to recurrent ketoacidosis.

In analyzing the main reason by the factors analyzed (Table II), we found that these did not differ between sexes. By age, in children under six years, the main indication was significant glycemic variability, unlike those six to 12 years, whose reason was quality of life; for those over 12 years, both glycemic variability and recurrent hypoglycemia had statistically significant differences.

Regarding time of development of DM1, in patients under one year and those over four years, the main indication was poor quality of life, as opposed to those one to three years old, whose indication was glycemic variability, which had a statistically significant difference.

Regarding HbA1c levels in patients with good control (with HbA1c < 7.5%), the main reasons were due to the presence of recurrent hypoglycemia and glycemic variability. For children with moderate lack of control (HbA1c between 7.6 and 9%), in addition to significant glycemic variability, the perceived poor quality of life also had an influence. In very uncontrolled patients (HbA1c > 9%), it was due to their inability to achieve the goals of glycemic control; there was a statistically significant difference between the groups (Table II).

To achieve the goal of high survival with good quality of life in diabetic patients, good glycemic control is needed. In addition to different actions, the use of CSII pumps for this control has been increasingly accepted in the world, although its indication so far has been justified for patients with difficult control.11 In this study we found that the indications could be broader, as was found in our patients who reported the main reason as "the desire to improve their quality of life." This decision could mean freeing children from the need for repeated blood glucose measurements through fingersticks and restricting certain activities to administer multiple boluses of insulin throughout the day.

Our data support different reasons depending on the patient’s age and their disease conditions. A first group could be made up of school children with little time from diagnosis and whose metabolic control was regular (HbA1c between 6 and 9%). In this group the adaptation to multiple doses and injections could influence their perception of poor quality of life. In general, previous studies have shown that this group is usually the most controlled and compliant with treatment. However, this has also been considered the group most interested in self-care, so they may therefore want greater freedom in their activities, a situation that could justify receiving CSII.12

Another group is teenagers. The main reason found with them was their great glycemic variability, which also results in not achieving the goals of control or maintaining normal HbA1c levels. Observing this condition in the adolescent group was not surprising, since several studies have shown rebelliousness in treatment adherence in this group. In addition, at this stage of life glycemic control may be affected by hormonal and bodily changes with changes in caloric needs.4,13,14 In these patients, the choice of CSII could avoid episodes of severe lack of control, both in hyperglycemia and hypoglycemia.8,14 In particular, we also note that this group had several patients whose reason for initiating CSII was not achieving the goals of glycemic control.

For children under six years, the reasons found were glycemic variability and poor quality of life. In this group, control by insulin bolus injections depends a lot on the parents. Therefore, the quality of life of the child could reflect the availability and attention of parents. This may mean greater dependence for the child, and therefore the perception of a poor quality of life. Therefore, the indication of CSII could encourage greater independence of the child with better glycemic control. This latter reason has been the most considered in previous studies, where CSII has been shown to significantly reduce hypoglycemic or ketoacidosis events.5,15,16

In analyzing the effect of time of development on the main reason for initiating CSII, the justification was also found in poor quality of life. This could be explained by the chronic fatigue of performing multiple injections.13,17

On the other hand, we found no gender differences in the main reasons for the indication of CSII. To our knowledge there are no studies that have found differences in children by sex and level of glycemic control.

Finally, both the American Diabetes Association of the United States (ADA) and the National Institute for Health and Care Excellence of the UK (NICE) note that the main reason for initiating CSII in pediatric populations is glycemic variability, which was the second leading reason in this work.11,18 This difference could be related to the final decision to initiate CSII, which not only depends on a medical justification due to poor glycemic control, but the family’s approval, who must consider the financial outlay for the purchase. This is because there are few public health care centers where pumps are given out. However, recent evidence indicates that although the therapy is initially more expensive, costs may be reduced long-term, because patients often have fewer chronic complications and lower expenses from hospitalizations.19 At the time of the decision, the parents’ acceptance often relies on better quality of life associated with treatment.

Due to the characteristics of this study, in a small population with a wide age range at a single center, further studies are necessary to confirm our findings.

The American Academy of Pediatrics states that all children with diabetes (regardless of age) should be considered as potentially eligible candidates for insulin pump therapy.4,18

In this study the main reason for initiating CSII was related to improving quality of life and controlling glycemic variability. However, the reasons differed depending on patients’ age and time of development. It is important, in encouraging the use of CSII, to emphasize the short-term benefits in patients’ quality of life and future improved glycemic control with reduced complications associated with diabetes mellitus.