Scientific contributions of Jules Hirsch regarding the physiopatogenesis of obesity

How to cite this article: Zárate A, Manuel L. Scientific contributions of Jules Hirsch regarding the physiopatogenesis of obesity. Rev Med Inst Mex Seguro Soc. 2016;54(1):92-5.


HISTORY AND PHILOSOPHY OF MEDICINE

Scientific contributions of Jules Hirsch regarding the physiopatogenesis of obesity


It is more easier to change genes than habits. The human is nothing more than a creature of habit.


Jules Hirsch was born in New York City and died at age 88 after a long illness. He was considered notorious leader in the study of human metabolism mainly in the area of lipids and obesity. His research at The Rockefeller University helps establish the mechanism of obesity and lipids metabolism. Hirsch joined Rockefeller´s faculty in 1954 and remained there for the rest of his career. Hirsch´s research helped to support the idea of dynamic interactions among diet, physical activity, general metabolism and obesity. At that time most scientific considered adipose tissue to be biologically inert such as a passive insulator in which the body reserved energy in the form of triglycerides. Hirsch had a natural characteristic of showing a nice smile and greeting for everyone he worked with at the university. Another important contribution was there relationship between diet and cardiovascular ailments as well as metabolism disturbance.

Obesity is a risk factor for cardiovascular disease. Recent advances have increased understanding of the cellular mechanisms by which adipose tissue induces alteration in local and systemic effects. In this regard, it is important to remember that Jules Hirsch was a pioneer in studies of adipose tissue in obesity. His initial work was with Edward H. Ahrens at Rockefeller University, where he learned techniques to determine blood lipids. Later he made studies on an experimental model in which he identified changes in the structure and size of adipocytes.

Consecutively, Hirsch identified that in the human body adipose tissue undergoes two effects to be able to accumulate excess calories that are ingested through food and are not consumed by the body. This induces hypertrophy, i.e. adipocyte grows due to increased intracellular triglycerides, which causes certain functions to be altered; however, this increase in accumulated fat produces another effect in adipose tissue: hyperplasia, in which the number of adipocytes increases, a factor influencing obesity. Therefore, with these effects on the adipose tissue it is easier to experience a weight gain. Thanks to these contributions from Hirsch, it was understood that adipocyte is not only a storage cell, but also has functions in the production and regulation of several hormones.

Jules Hirsch, who was born in New York City on April 6, 1927, was a child from a marriage of immigrants from Eastern Europe. His mother was a domestic worker and his father worked in garment production. Hirsch studied medicine at Southwestern Medical School at the University of Texas in 1948. Then he interned at Duke University Hospital and did his residency in internal medicine at the Upstate Medical Center in Syracuse. In 1954 he was resident at Rockefeller University Hospital and research fellow for two years; for his remarkable performance he was appointed assistant professor at the university. Soon he joined the university faculty and founded the Laboratory of Human Behavior and Metabolism in 1957. There he remained as director until his retirement as professor emeritus in 1985. (Figure 1). At the same time, he also served as physician in chief at the university hospital for four years.1,2 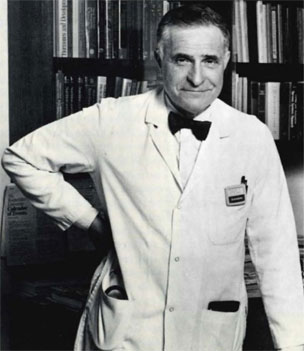 
In his early work under the tutelage of Edward H. Ahrens, Hirsch acquired great skill in the techniques of lipid extraction and purification, both circulating and extracted from adipose tissue, which allowed him to establish that there was a difference in both the type of lipids and the amount of adipocytes in obese people compared to those with normal body weight. Hirsch was able to show in experiments with rodents that if they made a partial lipectomy, then hyperphagia appeared, quickly leading to increased adipose tissue; thanks to this, he proposed that fat storage regulates appetite at the cerebral level (Figure 2). As a result of collaboration between Hirsch and Ahrens, they developed better chromatography techniques for identifying lipids and the key role of free fatty acids.3,4 In the late 1950s he managed to obtain subcutaneous adipocytes using the fine needle technique; thus, he facilitated the study of adipocytes by demonstrating that triglycerides constitute the main component of the metabolic pathway and energy carriers. Viewed another way, he concluded that circulating glucose enters the cell and is converted into glycerol 6-phosphate, which is immediately joined by free fatty acids and thus returns to circulation in the form of triglycerides; in addition, the remaining amount of fatty acids is recycled to serve as a precursor to new triglycerides (Figure 3).5,6 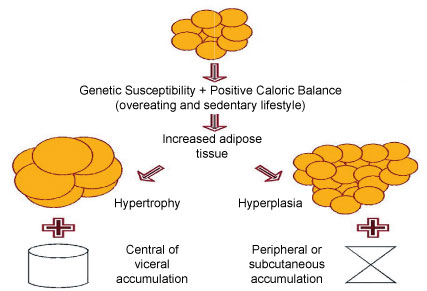 Figure 2 Schematic representation of the metabolic involvement of adipocytes. Illustrating increasing size and number of adipocytes in obesity 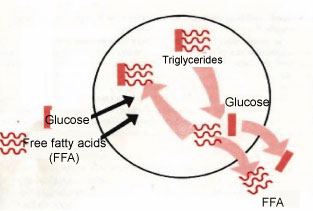 Figure 3 A shorthand way to illustrate how glucose and free fatty acids intracellularly synthesize the triglycerides that will serve as energy when needed. Note that the fatty acids can be recycled to form additional triglycerides

Jules Hirsch is considered one of the early leaders in the study of human metabolism and the biological changes that accompany obesity, independently of the will to regulate appetite and fullness.7-9 It is generally accepted that the natural evolution of human beings leads to the development of accumulation of energetic material in the form of body fat to protect against times of food shortage in the environment; therefore, it has been said that it is easier to store fat than to lose it. Based on this principle Hirsch made several studies on the type of caloric intake, storage, and effects on body weight; he also added that there was another participating factor, which was the level of physical muscular activity.9,10 Another discussion was related to the effect of both genetics and epigenetics involved in the preference for fat accumulation in the body. In this regard, it is known that there are specific receptors in the body to capture fat, and that the preferred sites are determined genetically and by environmental changes.11,12

In addition, Jules Hirsch contributed to the elucidation of the mechanism of obesity, which currently is one of the most alarming problems affecting health by its inherent association with multiple metabolic and cardiovascular disorders.13-15 His studies have also attracted therapeutic interest for the development of new agents that modify at the molecular level the tissue receptors for circulating fats, thus favorably altering metabolism. Hirsch also found a way to intervene on the brain’s control of the appetite-fullness axis, as well as agents of intercommunication of adipocyte with the hypothalamus.

In addition, many of Hirsch’s studies (Figure 4) on adipocytes and fat metabolism have contributed to the concept that adipose tissue is not simply a fuel store that provides the body with energy, but rather this tissue has the participation of molecules from other tissues and the brain’s regulation of the appetite-fullness axis at the hypothalamus. 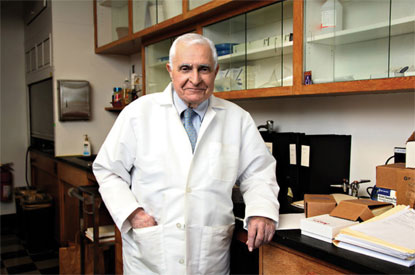 This article was published in Acta Medica Group Angeles (2015; 13 (4): 277-80). This reproduction has been authorized by Luis Benitez, editor of that journal.