Methods: A non-inferiority randomized clinical trial. Fifty patients with laparoscopic cholecystectomy were included into two separate groups. Intervention: 0.75 % ropivacaine infiltrated at the trocar insertion sites and in the gallbladder fossa compared with intravenous dipyrone. Measurements: The primary outcome was pain, which was assessed using the visual analog scale during the first 24 hours. Secondary outcomes were the presence of adverse effects, and the need for analgesic rescue with tramadol.

Results: The visual analog scale average for pain at the conclusion of the surgery was 3.8 in the ropivacaine vs. 3.56 in the dipyrone groups, while at 6, 12 and 24 hours the values were 2.64, 1.92 and 1.28, respectively, for ropivacaine versus 2.6, 1.88 and 1.2, respectively, for dipyrone. No adverse effects were observed in either group, and the two groups exhibited similar needs for analgesic rescue with tramadol.

Conclusions: Infiltration of 0.75 % ropivacaine at the trocar insertion sites and the gallbladder exhibits analgesia similar to IV dipyrone during the first 24 hours post-laparoscopic cholecystectomy without adverse effects.

Analgesia subsequent to laparoscopic cholecystectomy has been done with local anesthetics, narcotic analgesics, intravenous opioids or a combination of these,4 and of these, local anesthetics have shown to be highly effective in getting a postoperative analgesic effect.5,6 Ropivacaine shows a suitable safety profile, with lower neuro- and cardiotoxic effects7-9 and longer anesthetic effect10 compared with other local anesthetics. Moreover, dipyrone (or metamizole), an analgesic widely used for short periods of time in our country, is effective, well tolerated, and has few side effects in this type of use, although it is associated with renal and gastrointestinal impairment11,12 and hematological impairment;13,14 its analgesic effects are similar to other nonsteroidal anti-inflammatory drugs (NSAIDs) for postoperative pain in laparoscopic procedures, and it reduces the opioid rescue doses needed.15 A single dose of dipyrone has efficacy similar to 400 mg ibuprofen, 600 or 650 mg aspirin, or 500 to 1000 mg acetaminophen.16

Because it is still debated whether the use of local anesthetics in minimally invasive surgery is effective enough as a single analgesic mode,17-22 we decided to conduct a comparative clinical trial to assess the efficacy of two postoperative analgesic modalities in uncomplicated laparoscopic cholecystectomy, the analgesic provided by ropivacaine 0.75% given locally, or intravenous (IV) dipyrone.

The Hospital Central Sur de Alta Especialidad de Petróleos Mexicanos is a center for tertiary care and serves as a national model. The anesthetic and surgical team has been trained in laparoscopic surgery for several years, and cholecystectomy is the surgery they perform most often, usually by two surgical teams whose training and complication rates are similar.

For this study we included patients 18 to 80 years of age, male or female, scheduled for laparoscopic cholecystectomy for chronic gallstone disease and who had no other comorbid conditions, especially diseases associated with chronic pain, such as inflammatory arthritis, neurological diseases, chronic liver or kidney disease, or heart failure. They were allowed to occasionally consume analgesics or NSAID, but had to suspend it at least two weeks prior to surgery. It was necessary to have a physical status rating of class I-II according to the Physical Status Classification System of the American Society of Anesteshiology (ASA). We excluded patients who consume drugs used for pain modulation, such as pregabalin, gabapentin or duloxetine, or who were chronically treated with antidepressants; we also excluded those who had allergies to any of the study drugs and those who did not understand the use of the visual analog scale (VAS). We excluded from the study those who had to change from laparoscopic surgery to open surgery, those who had hypersensitivity reactions to the medications administered, or who presented anesthetic complications during surgery.

Both the evaluator and the patient were unaware of the analgesic mode assigned in this study, which was conducted from November 2011 to May 2012 and was approved by the Research Committee and the Hospital Committee on Bioethics by signing informed consent to participate.

During the preoperative and pre-anesthetic evaluation, conducted as usual, the fulfilment of inclusion criteria was verified, and patients were asked for their participation; once accepted, they were assigned in a 1:1 proportion using a random number table to two groups: Group R (ropivacaine) and Group D (dipyrone). In the operating room, heart rate (HR), mean arterial pressure (MAP), end-tidal CO2 (EtCO2), train of four (TOF), and oximetry were monitored noninvasively. With the patient supine, they were given ondansetron 4 mg and omeprazole 40 mg IV in both groups; anesthesia was induced with fentanyl 3 µg/kg, cisatracurium 100 mg/kg and propofol 2 mg/kg; later, endotracheal intubation was performed. Anesthetic maintenance was done with supplemental 100% oxygen and sevoflurane 1 MAC. Group R was given ropivacaine 0.75% (6 ml) before incision, in the areas of trocar introduction (3 ports) and, after cholecystectomy, upon review of hemostasis and washing of the cavity, 20 ml of ropivacaine 0.75% was instilled in the gallbladder fossa. Group D was administered 1 g of dipyrone IV infusion 20 minutes after cholecystectomy and every 8 hours for the first 24. Analgesic efficacy was assessed by VAS upon entering the recovery area and then at 6, 12, and 24 hours after surgery; HR, blood pressure (BP), and oximetry were also assessed. The presence of adverse effects or complications was gathered using a standardized questionnaire during the first four hours and at discharge, generally within 24 hours after the procedure and then through daily phone calls in the following week.

For analgesic rescue, tramadol 100 mg IV was used when a VAS of 4 points or more was found. The primary outcome was the VAS rating for the first 24 hours post-surgery. The number of analgesic rescues in each group, changes in MAP, HR, diuresis time, and frequency of adverse effects were also evaluated.

Because there has been no comparison of these strategies, it was decided to use a convenience sample size of 25 subjects per group. For analysis of the scores of the VAS, HR, BP, and SaO2 between the groups and at each assessment, a t-test was used for independent samples. The comparison of discrete variables was done statistically (chi square). In all cases superiority of one treatment over another was considered when p > 0.05. For analysis, software SPSS version 16.0 was used.

We included a total of 50 patients in this study, 25 in each group. There were no losses, changes to open surgery, or patients who died during the study. The baseline characteristics of the patients in each group are shown in Table I. In summary, 58% were women, with mean age of the entire group of 57.4 ± 13.3 years; 55% had an ASA physical status I and 45% ASA II. 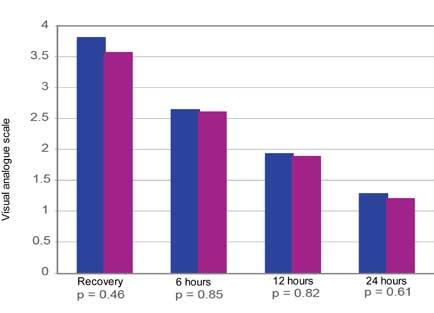 
Regarding secondary outcomes, no adverse events were reported in either group during the observation period or the days after discharge. When MAP evaluations were compared, there was difference at 24 hours and in the overall MAP average, where figures were lower in patients in Group D. Heart rate and oximetry showed no difference in any comparison, as shown in Table II. A total of 16 patients required rescue tramadol, 9 in Group R and 7 in Group D, and there was no difference in the proportion of subjects requiring rescue analgesics. Of these 16 patients, 15 required only one rescue and one patient required two rescues (they belonged to Group D).

Laparoscopic cholecystectomy is one of the surgical procedures performed most often, and the pain associated with this procedure is multifactorial (abdominal and peritoneal wall pain, both nociceptive pain),23 so the management of pre- and post-operative analgesia has been diverse, including local anesthetics, NSAIDs, intravenous opioid analgesics, or a combination. In previous studies that have used local anesthetic infiltration in the trocar placement area for pain from laparoscopic cholecystectomy, two trends have been seen: use pre- or post-incisional, with better results when used pre-incision, probably because this strategy allows early blockage of pain impulses and prevents the remodeling of "pain neurons," which has been observed in some clinical trials.10,20 Administration of local anesthetic intraperitoneally or in the gallbladder fossa has also shown positive results in reducing pain intensity measured by the reduced need for rescue analgesia with opioids or NSAIDs.

Multimodal analgesia is currently preferred for perioperative pain management with the combination of painkillers that act by different mechanisms, resulting in additive or synergistic effects, with the convenience of using lower doses and possibly fewer side effects. We decided to try two different analgesic modalities with a single drug each, because it was previously found that postoperative pain of laparoscopic cholecystectomy is moderate and can be managed easily with a single modality; we selected ropivacaine, a local anesthetic of the amide type, capable of producing prolonged analgesia, and dipyrone, which is an effective analgesic, well tolerated with few adverse effects in appropriate doses and for a short time.

We found that in patients without other comorbidities, with adequate health and scheduled for elective laparoscopic cholecystectomy, administration of ropivacaine was no worse than dipyrone IV in controlling postoperative pain during the first 24 hours, and that there was little need for rescue with tramadol IV. Moreover, the decrease in MAP is expected with dipyrone, an effect frequently seen, but it in no case compromised the outcome of patients or required additional handling. We found no significant side effects with the use of these drugs, although it is possible that the follow-up of 24 hours in the hospital and seven days by telephone interview may not have been enough, plus the sample size was not calculated to detect very low-frequency adverse effects. New studies are needed using local anesthetics with long half-life prior to trocar placement for laparoscopic surgery and subsequent instillation into the gallbladder fossa for postoperative analgesic management, in order to corroborate the results shown here. However, we found that this approach was safe and effective, and it is shown to be an alternative treatment for this common scenario.

Our study shows that locally infiltrated ropivacaine is at least as effective as conventional analgesia administered for laparoscopic cholecystectomy, plus it has few side effects.