Background: B lymphocyte stimulator (BLyS/BAFF) is an endogenous protein that plays an important role in the differentiation and maduration of B lymphocytes. Enhanced levels of BLyS have been reported in lupus and other rheumatic diseases.

Methods: Serum samples from 92 lupus patients (94% females, median age 35.5 years) and 106 controls (50 healthy donors, 38 with rheumatoid arthritis, 18 with scleroderma) were analyzed for BLyS. The cutoff of BLyS ˃ 1.98 ng/ml corresponds to the 95th percentile from the healthy donors. Antibodies against native DNA and disease activity also were evaluated in lupus patients. During follow up, BLyS levels in 32 patients showed heterogeneity.

Conclusion: The BLyS level is increased in some lupus patients. There was a moderate correlation with titers of anti-DNA antibody and disease activity. The monitoring of 32 patients showed heterogeneous levels of BLyS.

Lupus is an autoimmune disease mediated by B-cells. B lymphocyte stimulator (BLyS, also known as BAFF: B-cell activating factor) is an endogenous protein that plays an important role in the survival, differentiation, and maturation of B-cells to antibody-producing plasma cells. This protein is expressed in monocytes / macrophages, dendritic cells, and activated T cells, and it fixes to three B-cell receptors (BAFF-R, TACI, and BCMA). Another protein, APRIL, is fixed to two of the three receptors: TACI and BCMA.

Early studies show that BLyS has a relationship with autoimmune rheumatic disease. Overproduction of BLyS in transgenic mice leads to an increase of the B lymphocyte population, hypergammaglobulinemia, circulating immune complexes, autoantibodies, immunoglobulin deposit in the kidneys, and clinical manifestations similar to lupus and Sjogren's syndrome (SS). Animal models of lupus have elevated levels of BLyS in the circulating blood and the administration of BLyS antagonists to these mice slows disease progression and improves survival.1-4

In March 2011 a human monoclonal antibody specific for the protein BLyS, belimumab (Benlysta) was approved for the treatment of lupus. Controlled clinical trials were designed to analyze the long-term efficacy in subjects who also received conventional treatment, who were seropositive for antinuclear or anti-DNA antibodies with low complement, with mucocutaneous-articular disease manifestations, severe disease, but without nephropathy or neuropsychiatric manifestations. In general, patients had a good response: activity decreased, serological activity improved, exacerbations and doses of corticosteroids decreased.9

In this study BLyS levels were determined in patients with lupus and compared with a control group. The possible correlation between BLyS, anti-DNA, and disease activity was investigated. In 32 patients with lupus serial measurements of BLyS were made over a period of six months to two years.

92 lupus patients (94% women, median age 35.5 years, range 17-62) were studied according to the criteria of the American College of Rheumatology. One hundred and six sera (50 blood donors, 18 with scleroderma or systemic sclerosis and 38 with rheumatoid arthritis [RA]) served as controls. Demographic data of the 92 patients are shown in Table I. At the time of the study, patients were receiving one or several drugs including corticosteroids, cyclophosphamide, azathioprine, chloroquine, and nonsteroidal antiinflammatory drugs (NSAIDs). After obtaining written informed consent, blood samples were taken. In total 154 blood samples were analyzed in 6 to 24 months of follow-up. Disease activity was measured by Mex-SLEDAI10 with a cutoff point ≥ 3 points. The presence of native anti-DNA was analyzed by enzyme immunoassay (N = 0-3.0 U / mL). For analysis of BLyS, ELISA (R & D system, Inc., Minneapolis, MN) was used. The 95th percentile of the 50 blood donors served as the cutoff (˃ 1.98 ng/mL). In 32 patients ≥ 2 blood samples were taken (total 62) during follow-up. 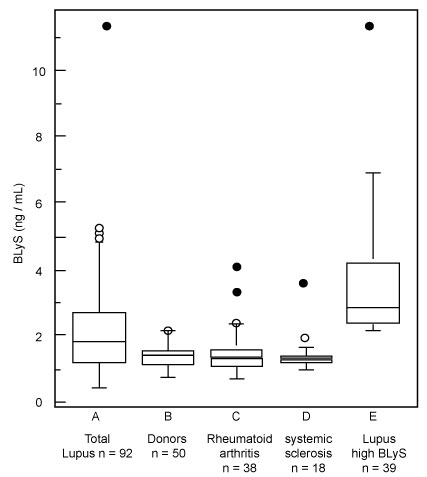 This study shows that the level of BLyS is elevated in the serum of some patients with lupus and is at least higher than in the control group. As is generally reported, most patients were women, with a median age of 35.5. 73% of patients had autoantibodies against DNA. Treatment modalities of our patients during the study and follow-up were no different from other studies. Median BLyS levels in total lupus (n = 92) and 39 patients with high BLyS were significantly different from the control group.

The prevalence of lupus patients with elevated BLyS is in the range of previous studies (21-80%). 38% of patients with elevated BLyS had nephropathy, compared with 13% of patients with low BLyS (p = 0.002). The mucocutaneous-articular manifestations were more frequent among patients with low BLyS versus patients with high BLyS (45% vs 17%, p = 0.000). Similar to other studies, no good correlation with anti-DNA titers and disease activity was found. Our study always used enzyme immunoassay to quantify the anti-DNA. Other methods for measuring anti-DNA, such as Crithidia Lucilliae and ELISA, were not used. Farr analysis is very specific for measuring anti-DNA, but uses radioactive material. Measuring disease activity was done by Mex-SLEDAI, validated in Mexico, which does not include immunological markers. This activity index is derived from SLEDAI, or systemic lupus erythematosus activity index. By contrast, this index includes levels of anti-DNA by the Farr method and its complement.

Follow-up confirms that BLyS levels can vary.11 Of the 62 blood samples, seven had persistently elevated BLyS levels, 15 had continuously normal levels, and 10 had normal or elevated levels. Patients with normal BLyS levels may require a threshold level for antibody response, including auto-antibodies.11

Finally, lupus is a heterogeneous disease or a multifactorial and multi-ethnic syndrome. This study shows that only 42% of patients with lupus in a Mexican population in the north of the country has elevated levels of BLyS in their serum. BLyS levels vary during follow-up without a good correlation with disease activity. Patients with high levels of BLyS, particularly those with mucocutaneous-articular affectation, seropositive for anti-DNA or AAN and active, can benefit from BLyS antagonists.