Background: The term hemangioendothelioma encompasses all tumors that derive from the endothelium of blood vessels. It has an uncertain prognosis, and it is always considered as a low-grade malignancy.

Clinical case: Male, 23, who was admitted to the emergency room with chest pain, intermittent paroxysmal nocturnal dyspnea and malaise. He denied having a history of degenerative diseases, and had a weight loss of 6 kg in two months. Chest X-rays suggested pericardial effusion. Patient presented a tendency to hypotension tamponade, which was solved with subxiphoid puncture, and drain 800 mL of liquid from ancient hematological parameters. He presented a tumor in the right atrium of 8 x 4 cm, attached to the anterior wall of the atrium without involucre of interatrial septum. When patient underwent surgery, it was identified a tumor lesion in the anterior wall of right appendage. It was done the resection of the tumor and of 70 % of the right atrial appendage. The latter was replaced with bovine pericardium. Patient showed good outcome; it was discharged after 10 days of follow-up surgery for six months in the outpatient clinic.

Conclusion: The hemangioendothelioma is a vascular tumor of unpredictable behavior, and whose origin rarely comes from the heart. A timely detection, and a radical surgical resection is, so far, the more acceptable management, given the worldwide little experience for handling this type of tumor. Our experience suggests an aggressive clinical approach and surgical removal within the first hours of the suspected diagnosis for the greatest chance of complete resection and reducing the risk of recurrence.

Crusted scabies or Norwegian scabies is a rare and highly contagious disease due to the existence of a large number of parasites in the lesions, including those at the subungual level and the scalp, locations that are unusual in classic scabies. It usually affects patients with a compromised immune system, such as those with HIV / AIDS. Compared to classic scabies, which includes excoriated papules in the periumbilical and interdigital area and the forearms, crusted scabies presents keratotic plaques (Figure 1A-C) located on the extremities, trunk, pinnae, and eyelids; the first is intensely pruritic unlike the second, which causes pruritus in few patients. Treatment regimens are varied and include keratolytics (salicylic acid 5% ointment), systemic retinoids (etretinate), systemic immunomodulators (methotrexate), topical scabicides (permethrin), and systemic (oral ivermectin), with conflicting results in the literature.1 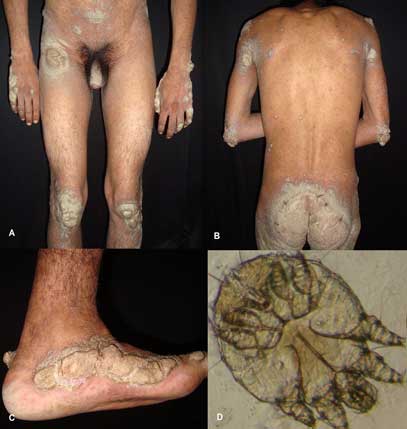 
We report the cases of crusted scabies in patients with HIV / AIDS seen in our service over the past 10 years.

We identified 15 patients with crusted scabies (9 men and 6 women). The mean age was 43.7 ± 8.06 (range 32-57 years). All patients were diagnosed with HIV / AIDS in treatment with antiretroviral therapy. The demographic and clinical characteristics of the sample are described in Table I.

The diagnosis was made after a median of five months (range 1-14 months) after the start of the dermatosis. All cases had adult mites at the time of lesion scraping and direct examination (Figure 1D). The average CD4 + count was 237.86 ± 60.3 cells / µL, with a median of 235 cells/µL.

All patients were treated with repeated doses of oral ivermectin with different regimes (as there is no consensus on the ideal dose) and showed no serious adverse events or any that required adjustment of dose or treatment times. This suspension came one week after observing the clinical or microscopic cure.

All cases were completely resolved without recurrence at follow-up, which averaged six months.

An interesting finding was that patients who had positive serology for hepatitis C had lower levels of eosinophils in blood than those without the infection (Figure 2), although the severity of the disease and response to treatment with ivermectin was not different in the two groups. 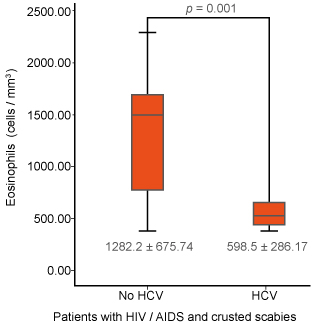 
Scraping the lesions was a very useful diagnostic method and avoided the need for biopsy, leading to early disease management and reducing the risk of contagion. As mentioned in literature,2 it is recommended to scrape at least three distant sites, as those taken from a single lesion may be negative.

It is interesting that only four patients were initially diagnosed with crusted scabies, which highlights the difficulty of clinical diagnosis and the need to suspect the existence of the disease in immunosuppressed patients with chronic keratotic plaques with little itching.

Our results suggest that oral ivermectin is a good option for treating crusted scabies in patients with HIV/AIDS with or without hepatitis C virus, even without additional topical treatment. In addition, the study allows the conclusion that the elevated levels of eosinophils in crusted scabies (up to 58% with values ​​up to 10 times higher than the normal level)3 are significantly lower in patients infected with hepatitis C, compared with those without the infection. One possible explanation for this is that eosinophils are cells susceptible to infection by hepatitis C virus, which may affect its activity, and consequently its circulating levels.4 Barnes et al.5 observed that in patients infected with the hepatitis C virus, with liver transplantation, and those in whom eosinophilia is an important marker of acute transplant rejection, eosinophil levels in the blood were significantly lower compared to those without the infection. The role of eosinophils in the pathogenesis of crusted scabies is unknown.3

Finally, crusted scabies in patients with HIV / AIDS exhibits a chronic disease with a variable clinical picture; it often adopts a psoriasiforme aspect with a lot of mites in the lesions, which can be evidenced by direct scraping of several of them, and it has a good response to ivermectin as monotherapy.