Type 2 diabetes (T2D) is a disease characterized by a deficiency in production or action of insulin. It is the result mainly of the interaction of the environment, lifestyle, as well as genetic factors. It is considered as one of the major health issues in the world because it affects severely the psychological well-being and overall life quality. Recently it has been shown that DNA copy number variations (CNVs) are associated with several diseases, including obesity and T2D. The CNVs are present from 9 to 18 % of the genome and can modify the expression levels of mRNA and proteins encoded by genes located near their localization. Less is known about their contribution to the pathogenesis of metabolic diseases, which is necessary to characterize so that these variations can be potentially used as biomarkers of genetic risk CNVs of T2D.

Type 2 diabetes (T2D) is a metabolic disorder characterized by chronic hyperglycemia with disturbances in the metabolism of carbohydrates, lipids, and proteins. It is caused by a defect in the secretion and/or action of insulin.1 This epidemic is recognized by the World Health Organization (WHO) as a global threat. It is estimated that there are over 346 million people with T2D in the world and that 3.4 million deaths occur from complications. It is expected to more than double by the year 2030,2 a situation that also represents a public health problem in Mexico.3 The prevalence of the disease was estimated at 14.42% according to ENSANUT 2006, which represents 7.3 million Mexicans over 20 years of age.4 ENSANUT 2012 on the prevalence of T2D showed 9.2% by previous medical diagnosis, higher than that reported in the previous survey.5

T2D is a multifactorial disease with a high influence of genetics of the individual. Factors associated in the Mexican population are age, low education, co-existing renal disease or hypercholesterolemia, and abdominal obesity.6,7 In terms of genetic variation it has been observed that the presence of single nucleotide polymorphisms (SNP) is associated with obesity and T2D.8 To date 70 loci associated with T2D have been identified; thus, research has shown an increased risk for developing diabetes in patients with SNP in the FTO and MC4R genes with an inadequate diet,9 and decreased risk of T2D in patients with SNP in TCF7L2 subject to lifestyle interventions.10 Despite having over 70 genes involved, the cases attributable to these SNPs do not exceed 10% of the total cases of T2D, so new possibilities have been explored, such as copy number variations (CNV).

Genetic diversity in the Mexican population

The Mexican population is characterized by a high degree of genetic diversity. The population consists of a mix of native Amerindian genes ranging between 49 and 65%, of European genes between 30 and 45.8%, and East African genes between 1.8 and 6%, depending on geographic region of the country studied.11-14 At present genetic variants associated with European population and Amerindians have been shown, among others. Measuring ancestry in genetic studies in ethnically mixed populations is necessary, given that stratification is a confounding factor for genetic associations.15 Ethnic differences among the Mexican population and the populations of European origin, in whom most of the genome-wide association studies (GWAS) have been done, have shown differences in the genetic signals associated with T2D.16-18 The first GWAS for T2D done with Mexicans showed replication of only four gene regions of all the 46 regions reported in the literature in 2011 (HNF1A, KCNQ1, CDKN2A, CDKN2B).19 To date, 18 gene loci have been described associated with T2D in the Mexican population, which have mostly been obtained from comparative and case-control studies (Table I).20-36 Recently, a meta-analysis of 26,488 cases of T2D and 83,964 controls of European, East Asian, South Asian, Mexican and Mexican-American origin showed seven loci associated with diabetes, regardless of ancestry (TMEM154, SSR1-RREB1, FAF1, POU5F1-TCF19, LPP, ARL15, MPHOSPH9).16

Copy number variants in the genome

The human genome varies as a result of changes in sequence and structure. Variations in the sequence include the SNP and small insertions and eliminations (deletions) of a few nucleotides. Structural variation includes the CNV and chromosomal aneuploidy.37 Through complete genome analysis and using arrays based on comparative genomic hybridization and other types of genome-scanning technologies, CNV have been identified and classified according to their size. Typically DNA fragments are larger than 1 kb, and their difference in copy number is evident when compared with two or more genomes,38  including genomic insertions, deletions, translocations and inversions.39 It is believed that at least 12% the human genome contains CNV.40 These are common among healthy individuals; in fact, two people will differ in copy number by around 0.78% of their genomes.41 Initially, the CNV were identified during locus-specific studies42 or during the analysis of families of genes.43 Identifying CNV throughout the genome can be done by sequencing or by microarray. The use of microarrays has been the most widely used instrument that has advanced knowledge of CNV.44 It has now been determined that CNV can affect human phenotypic variation and contribute to the propensity to diseases such as autism,45 psoriasis,46 schizophrenia,47 obesity,48 and Crohn’s disease.49

CNV present in genes can influence expression levels of both mRNA and protein. It is estimated that between 9 and 18% of heritable variation may be associated with copy number.50 In addition CNV may directly or indirectly affect expression of neighboring genes, as the removal of regulatory regions (such as enhancers) decreases expression of the target gene and the amount of protein produced. Moreover, the loss of exon regions produces protein isoforms that are often not functional.51 Another alternative explanation for the observed change in relative expression levels of genes mapped near CNV about changes in copy number is based on recent evidence in the transcript of the entire genome.52 Recent studies show that multiple transcriptionally active regions associate to form a large variety of transcripts in a given locus with more than half, which are alternative non-coding transcriptions of protein-encoding genes. Similarly, genes use the promoter of neighboring genes in cells and specific stages of development.53

The onset of transcription-induced chimeras has been described, whereby exons are transcribed in tandem into a single mRNA molecule, which appears to be widespread, affecting more than half of the loci studied (Figure 1).54 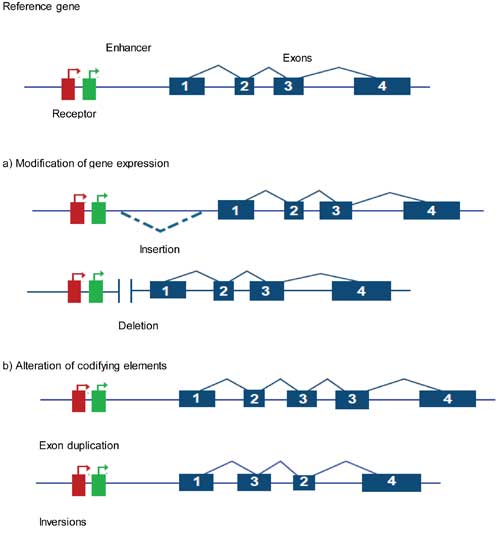 Figure 1 Influence of CNV in the genome. The presence of CNV affects gene expression at mRNA and protein level: a) The presence of insertions or deletions at the level of transcription regulatory regions (enhancer and repressor) impedes their interaction with the gene promoter, leading to decreased expression. b) Duplication of exons and inversion of codifying regions leads to the production of chimeric proteins (modified from Hurles et al., 2008 56).


These genes may have several alternative regulatory regions, independent of promoters, and often their boundaries overlap with other genes, plus it is possible that the relative expression level of this unit of transcription may change.55,56

There are few studies evaluating the association between CNV and T2D (Table II).57-67

Diabetes is a multifactorial metabolic disease with varying degrees of hereditary predisposition and mainly caused by exposure to environmental factors. The disease is characterized by persistent hyperglycemia due to deficiency in the production or action of insulin, which affects the metabolism of carbohydrates, proteins and fats. Epidemiological data indicate that the risk of developing this disease is higher in populations of Amerindian origin than in populations of European origin. In addition, there is evidence that there are genetic risk factors involved in these differences in prevalence. Mexico is among the countries with the highest occurrence of T2D globally and this is related to the genetic differences of the Mexican population, combined with environmental exposure. Several studies have focused on finding the genomic variations that contribute to the propensity to disease. Thus SNP and CNV have been characterized as contributing to genetic diversity among individuals. CNVs are variants in the genome of size greater than 1 kb; they are found in approximately 9 to 18% of the genome and affect nearby genes and alter their expression at the mRNA and protein level. This variability is the basis for different phenotypic characteristics associated with CNV. Despite its importance, CNV have been little studied, so it is important to continue analyzing them to determine their size and location and thus to know their contribution to the pathophysiology of the disease. The CNV affect important regions of the genome, which are involved in various signaling pathways and are metabolic, so understanding their mechanism of action is a prerequisite for consideration of possible prognostic, preventive, and treatment strategies for T2D, but not without reiterating the role of lifestyle modifications as the main effort to control this disease