Background: The primary caregiver faces a set of problems derived from the responsibility to provide care to his patient; this leads to the creation of complex psychological responses that act as a mechanism known as cognitive and behavioral coping. The objective was to determine if there was a correlation between the level of anxiety and the coping strategies used by primary caregivers of bedridden patients.

Results: We included 60 primary caregivers. The most common score for anxiety was moderate (28 %). The most frequently used strategy was problem solving (average = 14.7). By relating the level of anxiety and coping strategies a significant correlation was obtained with problem solving: r = 0.260; self-criticism, r = 0.425; wishful thinking, r = 0.412; and social withdrawal, r = 0.453.

Conclusions: The anxiety has an impact on the way caregivers cope; most of the population who have moderate to severe anxiety use desadaptive strategies focused on emotion.

The caregiver of a patient is a key element of the team-patient-family therapeutic triangle, since they help them meet their needs, solve many of their problems, and offer much support so they can better cope with their condition.

Most of the time, the role of primary caregiver is not acknowledged, and the stresses to which they are subjected every day are not taken into account, much less is the existence of health problems that can hurt them identified. This caregiver frequently experiences anxiety, so it is necessary to implement a number of strategies to help them face this.

As a result of the role the primary caregiver performs, they face a set of physical, psychological, emotional, and social problems based on the great responsibility of the care and attention lavished on the patient, especially the bedridden patient; this consequently leads to complex physiological responses that act as cognitive and behavioral mechanisms (thoughts and behaviors known as coping) to resolve demanding situations.

The way to cope with the aforementioned demanding situations can have two possibilities. The first is adaptive responses, which generally help improve emotional well-being, actively promote change while providing alternative solutions to problems, increase bonds with others, and change the way people think and feel. The second possibility consists of maladaptive responses that are associated with distress and anxiety, and these keep the caregiver from approaching the situation, generate emotions and thoughts that emerge extreme and rigid, which do not allow the situation to change (e.g., obsessive thought, confrontation, and inadequate emotional discharge) or even make it worse.1

Several studies report that between 46 and 59% of primary caregivers used prescriptions for depression, anxiety, and insomnia two to three times more than the rest of the population.2 Alterations have been identified that affect multiple areas (emotional, social, structural), which should be considered symptoms with equal relevance to those presented by the patient served by the primary caregiver.3

Various investigations in the framework of informal care for dependents have shown that coping using cognitive and problem solving is associated with lower levels of emotional distress, while coping strategies focused on emotion are associated with higher levels of psychological discomfort.4
In this regard, the effectiveness of certain cognitive coping strategies for caregiver burden is noted. Specifically, studies have found that the

implementation of active strategies of coping by the caregiver, such as the redefinition of the care situation and its consequences, are especially useful for reducing levels of burden and depression.5

These active strategies refer to those related to the meaning of the disease, and may include the construction of a broad sense of it by the caregiver, cognitive restructuring of the meaning of stressors, and the conviction that this is a process associated with aging. For Pearlin and Skaff,6 this type of coping could be more effective when the stressors are not easily modified.

A study done in Italy reports that 152 primary caregivers of cancer patients, 63% of women and 38% men, had a high level of anxiety and depression; the study also reports that the women mostly used coping strategies focused on emotion.7

In Spain a study was done of 80 primary caregivers of Alzheimer's patients, where a high level of anxiety and depression was shown. The use of coping strategies focused on emotion, such as avoidance or withdrawal, as well as a high perception of burden on the caregiver, was positively correlated with anxiety and depression.8

In London 35 studies were reviewed examining the relationship between anxiety, depression, and coping among caregivers of patients with dementia. All concluded that maladaptive coping strategies, such as little emotional support and lack of acceptance, correlate with higher levels of anxiety and depression.9

Therefore, the objective of this study was to determine whether there is a correlation between the level of anxiety and coping strategies used by primary caregivers of patients in a bedridden state.

A descriptive, transversal, and correlation design was developed. The population consisted of primary caregivers with some degree of kinship to patients in a bedridden state, affiliated with the program Atención Domiciliaria a Enfermos Crónicos Degenerativos y Terminales (ADEC) of the Hospital General Zona No. 47 Vicente Guerrero of the Instituto Mexicano del Seguro Social (IMSS), who agreed to participate by signing a written informed consent. Convenience sampling and sample size calculation with p = 0.03 and 0.20 precision level were done.

Regarding the ethical aspects, the research fully adhered to the Declaration of Helsinki of the World Medical Association in 1964, and its subsequent amendments including Seoul, Korea, 2008, plus it was based on the Ley General de Salud for research.

As for the statistical design, to associate anxiety and coping strategies we used the Spearman correlation with significance level of 0.05. We also used SPSS version 15.

Figure 1 shows the results related to anxiety levels; this is identified as moderate to severe in 50% of cases. 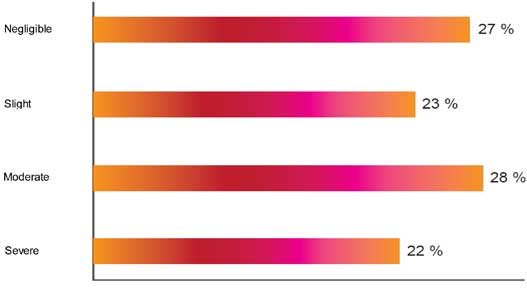 
For coping strategies, the most frequently used was problem resolution with an average of 14.72, followed by wishful thinking with 12.5, while the least used were problem avoidance with 4.22 and self-criticism with 2.55. These results are presented in Figure 2.

According to Lazarus and Folkman’s cognitive model of valuation and coping,12 when the subject considers a situation as threatening or aversive and perceives that their resources and coping strategies are insufficient to ameliorate this situation, anxiety is manifested; at the beginning the intensity of response is related to the assessment that the individual makes of the situation, but it is expected that with greater skills to deal with these situations, anxiety responses will decline.

In this study, the only adaptive-type coping strategy which resulted in statistically significant correlation with anxiety was problem resolution, namely that primary caregivers, initially willing to participate, strive to find in the time of crisis solutions to problems inherent to the disease through a plan of action;13 however, their response is likely to be inefficient over the course of the disease, and, upon not getting a satisfactory solution or not getting the results expected, a state of mood is affected, and eventually they come to favor the use of maladaptive strategies.

The use of problem-focused coping strategies affects the well-being of the caregiver, reducing levels of overload, improving the quality of life of the patient, increasing their survival rate, and decreasing anxiety and depression.14

Most primary caregivers in this study used coping strategies focused on emotion and responded maladaptively to the demands of caring for a patient in a bedridden state. Thus we get an association with statistical significance between anxiety and self-criticism, wishful thinking, and social withdrawal. The association however was presented low to moderate for different values ​​of the correlation coefficient.

This is consistent with reports by Sandin and Chorot,15 who reported that subjects exposed to high levels of anxiety tend to use emotion-focused strategies, are poorly oriented to define the problem, generate few alternative solutions, and tend to be less likely to get emotional wellbeing and information from others.

Self-recrimination arises as a result of feelings of worthlessness, frustration, helplessness, and guilt, to condemn the arrangement itself, the time and type of care given to the patient, as well as decisions made about their family member and the disease facing the treatment team, actions to be questioned and also disqualified by the rest of the family and that enhance self-criticism.

Sometimes, far from being appreciated, encouraged, and understood, the caregiver is criticized and receives little support of the family, usually siblings, which can be a source of added anxiety rather than a source of support.16 Possibly this aspect favors the fact that many caregivers are isolated from the social network, living solely for the family member they are taking care of, transforming the patient-caregiver dyad into a closed system.

Another factor favoring social isolation is the attention to the bedridden family member, as they require intensive care in performing daily activities, assistance in vital needs, and interacting with the patient and their behavior. This results in the primary caregiver choosing to withdraw from society, friends, family, peers and significant others. Bermejo17 mentions that as the disease progresses, caregivers experience excessive concern over decisions made for the care of the patient and manifest psychosomatic problems of anxiety or depression. All this is a very significant emotional weight, further complicated by the difficulty in managing one's own time and multiple responsibilities, and the feelings related to the pressure of the patient’s dependence.

Caring for a bedridden patient changes the dynamics of family interaction, since it confronts the family with the imposition of new goals that are also unexpected and affect personal satisfaction. In this study we noticed that before these changes, anxiety increases in the caregiver, who, in a defensive process that tends to deny the reality that they are living, and desiring to avoid the stress that this causes them, try to avoid the situation by fantasizing about alternative realities. With regard to this kind of coping strategy (wishful thinking) it has been shown that people who use avoidance as a way of coping have a significant psychological dysfunction associated with anxiety and depression.4

In this study we observed how anxiety affects these caregivers’ way of coping, since most people who have moderate to severe anxiety tend to use strategies focused on emotion, making problem resolution and cognitive restructuring difficult.