Objective: To establish the proportion of women of 40 years-old and more, which perform properly breast self-examination in the Family Medical Unit 18 of the Instituto Mexicano del Seguro Social from Teapa, Tabasco, Mexico, in 2011.

Methods: Cross-sectional study in a universe of 1457 women. A random sample of 127 women was obtained and aleatorily selected. Socio-demographic and hereditary variables were included and breast self-examination technique was evaluated. The information was taken from clinical files and check lists. Descriptive statistic was obtained.

Results: The mean age was 52.7 ± 9.3, with a confidence interval of 40-80 years-old. Women with a primary-school education were the largest group, representing 35.4 %. Family antecedent of breast malign tumor was found in 11 %. The mother was the most frequent parent with this background (42.9 %). Adequate breast self-examination technique was observed in 0.8 %.

Conclusions: The proportion of women that performs breast self-examination properly is very low. Associated factors were not found. Educative interventions are required in order to correct this problem.

A malignant tumor is an abnormal growth of tissue that is characterized by the loss of control of growth, as well as development and cell multiplication capable of producing metastasis.1 Because of the way they behave, tumors have colloquially been called "cancer", as it is considered by analogy that these abnormal growths of tissue hold on to healthy tissue "like the pincers of a crab".1 In this sense, the malignant tumor of the breast (ICD-10 code: C50)1 has been designated colloquially as "breast cancer", a term so widespread in the medical jargon that would be difficult to refer to it by its right name, considering that even the corresponding official Mexican law refers to the illness this way.2

Regardless of denomination, breast cancer among women is the malignant tumor of highest prevalence and incidence in the world, followed by that of the cervix. According to the latest report from the World Health Organization (WHO), in 2008 the global incidence ranged from 150 to 250 per 100,000 women.3 Mexico is one of the countries with the most new cases, and it is the leading cause of death from malignant tumors in women over 25 years.3-5

Prevention through screening is the strategy of choice.8,9 There are three strategies for early detection: breast self-examination, clinical examination, and mammography.8,9 Among these, self-examination is the cornerstone of prevention and control programs, since the sensitivity of the test is high if the correct technique is employed.2,8,9

The technique consists of two steps: inspection or observation and palpation.2,8,9 Notwithstanding the simplicity of this test, breast self-examination has low prevalence among women, between 10-30%.10-22 This low prevalence has been attributed to the social representation that tends to be held about self-examination, which in the context of an orthodox religious education is perceived as a sinful act by sexual connotation, as has been mentioned by healthy women as well as by those affected by breast cancer.10-13 In this regard, prevention and control programs face a major cultural barrier, added to lack of awareness and the improper execution of the technique.

Where the same religious beliefs are shared, several authors have evaluated the knowledge and practice of breast self-examination in various groups, and have identified some factors associated with adequate knowledge and correct practice.14-20 It has been observed that sufficient knowledge about the technique is presented in low proportion (< 60%), whereas the correct practice of the technique is even less frequent (< 50%), even among health professionals.14-20 The associated factors that have been observed include better knowledge and practices in those with a primary family history, higher level of schooling, and unorthodox practice of one’s religious beliefs.14-20

However, the problems described may be corrected through educational strategies, of which personalized "Woman to Woman" counseling is the most effective.21,22

The approach outlined led us to ask, what is the proportion of women aged 40 and older who correctly do breast self-examination in the Unidad Médica Familiar 18 of the Instituto Mexicano del Seguro Social, in Teapa, Tabasco in 2011? This was the motive that led us to conduct this study in order to answer the question.

We conducted a study with quantitative methodology, using an observational, cross-sectional, and ambispective design. The universe consisted of 1457 women aged 40 or more, enrolled users of the Unidad de Medicina Familiar (UMF) 18 of the IMSS in Teapa, Tabasco, in August 2011. In this universe a simple random sample was studied, obtained by the formula for descriptive studies of qualitative variables in finite universes,23 through which we considered a probability of occurrence (correct breast self-exam) at 10% (p = 0.1, q = 0.9),24 and to allow a maximum error of 5% (d = 0.05), with 95% confidence (Z = 1.96), we obtained a sample of 126.5 ≈ 127 women who were randomly selected and systematized in intervals of 12.

The study included women 40 and older, enrolled users of the UMF mentioned, who went to the office of Preventative Medicine in that unit during October and November 2011. The study excluded women who met the defined inclusion criteria who also had uni- or bilateral mastectomy, absence of one or both hands, disabilities to prevent them from self-examination (e.g., blindness, mental retardation, cognitive impairment, etc.) or known breast cancer diagnosis.

During consultations in Preventive Medicine, researchers completed an evaluation form of the information contained in the patient’s medical record and corroborated with direct interview. The evaluation of the patient’s technique of breast self-examination was made during this event and compliance with the technique was revised using a checklist, including observation, palpation, and reference of warning signs. The technique was considered successful when the patient properly executed its entirety and enunciated all the warning signs. This instrument did not require validation as it is what the Secretaría de Salud makes standard in its Manual for Clinical Breast Examination.8

The information thus collected was systematized in a database designed for this purpose, using SPSS software, version 15.0 for Windows, with the corresponding statistical analysis consisting of descriptive statistics for all variables, and the calculation of chi-squared and odds ratios with 95% confidence (p ≤ 0.05) to measure the association of correct/incorrect self-examination technique with the variables included in the study.

This study was an investigation without risk to the integrity of its participants, since nothing was done to them nor was sensitive information handled, so informed consent was not requested, while the collected information was systematized and analyzed anonymously. It was also was approved by the Local Committee on Health Research 2701 of the Instituto Mexicano del Seguro Social.

The largest proportion reported primary schooling, as shown in Table II. 79.5% (n = 101) were housewives and 20.5% (n = 26) were salaried workers. Most reported to profess Catholic religion, as noted in Table III.

11% (n = 14) of women reported having a family history of breast cancer. The mother was the family member mentioned most frequently, as seen in Table IV.

Only one woman (0.8%) successfully performed the breast self-examination technique. The three components of this technique were performed properly at a ratio < 13% and correct statement of the warning signs was the rarest element (Figure 1). 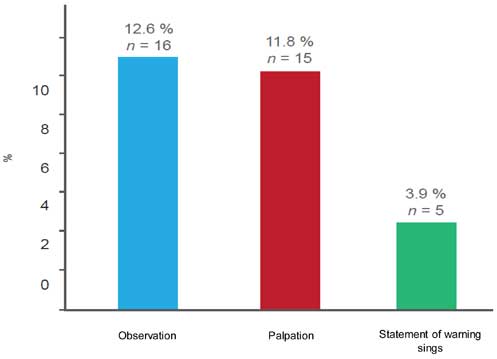 
Finding one single case of properly executed technique breast self-examination, it was not actionable to obtain chi-squared or odds ratio to identify possible associated sociodemographic or family history factors.

The biases and limitations of this study should first be noted. As for limitations, the results are limited to what was observed in a single medical unit, so they are only useful in practice for this, while its scientific value as a reference is broader. Concerning biases, the Hawthorne effect may be present;25 however, the results do not suggest it, as Type I and II errors were controlled.

Regarding the results, the demographic profile of the population was a woman of about 53 years, with primary schooling, married, housewife, Catholic, with an average of four children, for whom when there is a family history of breast cancer, it is usually primary. This profile corresponds with that reported in the literature,3-9 which is a population at risk for breast cancer before for whom preventive measures should be emphasized.

Finally, regarding the possible factors associated with correct or incorrect practice of breast self-examination, although the literature reports on various associated factors,14-20 in this series it was not possible to make the corresponding estimates, so it is not possible to confirm or deny that such associations exist.

This paper was presented at the Fifteenth Congreso de Investigación en Salud Pública, held in Cuernavaca, Morelos, Mexico, from March 6th to 8th 2013 under the auspices of the Instituto Nacional de Salud Pública.