The goal of the current investigation was to report an unusual case of a worker acutely exposed to big amounts of cement dust. This exposure caused chemical bronchioalveolitis and dermatitis due to chromium contact. This person suffered the exposure when a cement deposit exploded at work. This exposed the worker to big amounts of cement dust. After the accident, the individual suffered dyspnea and bilateral basal pulmonary crackles. The subject also presented an atypical restrictive pattern, which could also be seen on X-rays as 1/1 q/q images of the classification of 2000 of the International Labour Organization (ILO), and a bulging of a pulmonary artery. A restrictive pattern pure atypical was observed, and arterial blood gas with hipoxemia. A treatment with steroids was prescribed and the worker showed some improvement. There is high risk of developing pulmonary fibrosis with the progressive evolution in stages of the bronchioalveolitis, even when the subject is isolated. Therefore, it would be very convenient to create a specialized medical center where workers that have this kind of accidents can have the proper care by qualified personnel.

Every year there are thousands of new drugs and all of them have to undergo strict toxicity acute tests. Given the necessity of some of these drugs in the market, sometimes they do not get to be tested long enough and, therefore, long term side effects cannot be determined. Considering this, many times we do not know the pathologies that might be caused when a worker is exposed on daily basis for a long term to these substances. We don’t know the pathology produced by them.1 The long time exposure to cement dust (10 to 20 years) usually produces pneumoconiosis, but sometimes, the patients present uncommon or very rarely researched symptoms.

The materials needed to manufacture cement are obtained from outdoor mines. Cement is produced through five stages. Stage one consists of limestone extraction, clay, silica, aluminum oxide, iron and chromium. The second stage materials are crushed, separated and stored. Then the ingredients are dosed to the right mix and get calcinated in kilns at 15000 °C, giving as a final product some kind of pre-cement, named clinker. This final product gets ground and mixed with plaster and gets stored in sacks. The main products that can be obtained through this process are:

Cement mixed with sand, stone, water and other aggregates produces concrete. The airways exposure to big amounts of chemical agents, for example2 dust, smoke, gasses, vapors, fog and dew, produces a pathology known as gassing.3 This disease is caused by a sudden exposure and is usually the cause of an accident at work.

The goal of this research was to inform about a very unusual case of a worker exposed acutely to big amounts of cement. This caused an industrial chemical bronchioalveolitis and dermatitis caused by chrome contact.

A male worker of 25 years suffered an accident at work. This person got into the production area of a factory in order to take concrete samples. All of a sudden, a cement deposit with dust cement that was placed three meters over the ground exploded and leaved this subject buried in cement. Right after the dust fell a cloud was formed causing the person to breath big amounts of the material. There were also other four subjects near the worker, but they did not get buried in the dust.

When this worker got out of the premises, right after the accident, he showed dyspnea of moderate exertion, dry cough, accesses, eye and skin irritation; he was also very anxious and distressed. The person was asked to take a shower and he got an eye wash. He was given oxygen, bronchodilator salbutamol type, and was taken to the emergency room of a specialized clinic.

In that clinic the person got oxygen again, as well as bronchodilators and antihistamines. The subject stayed in the hospital for seven days, in the internal medicine service, where he was constantly under the same treatment. During the hospital stay he expelled bronchiolitos in the expectoration, and he also presented cutaneous rash on the inner and outer arms, neck and thorax, with vesicles from 2 to 4 mm (figure 1). In the medical service the periodical examination of X-rays was normal (figure 2). 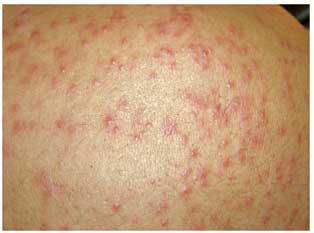 Figure 1 Cutaneous rash on the inner and outer arms, neck and thorax, with vesicles from 2 to 4 mm 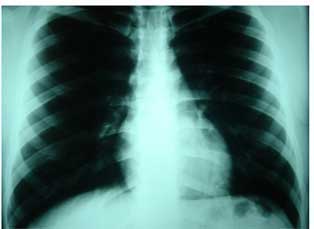 
During the physical examination, the patient showed respiratory distress, with a heart rate of 32 beats per minute (bpm), bilateral basal crackles in anterior, lateral and posterior regions of the thorax, reinforcement of the second sound in pulmonary focus, abundant skin vesicles with diameter from 2 to 4 mm inside of the thorax, both arms, the sides foot, neck and face, as well as few pustules with 4 mm in diameter.

The background of the patient consisted on working on several cement companies for the last eight years, always assigned to the quality control laboratory, processing concrete samples. In the company where the accident happened, this person had been working for three years as a concrete analyst for quality control.

Fifteen days after the accident, the patient underwent a radiographic chest study, pulmonary function test4,5 and arterial blood analysis at rest after five minutes of exercise and in decubitus position.

In the X-rays of the chest taken 15 days after the accident (figure 3) some opacities were detected rounded at 1/1 q/q (which is the code of the International Classification of Radiographs of Pneumoconiosis of the International Labour Organization of 2000), basal predominance and arc bulging in the pulmonary artery. In the spirometry, performed the same day (figure 4), a restrictive atypical pattern was observed, characterized by a Tiffeneau index of + 8, flow rates with very high values because of an increased elastic retraction generated by an interstitial edema. The Forced Expiratory Volume in first second (FEV1) was greater than the forced vital capacity (FCV) with percentage loss of the relationship that must be the 80 % of the FCV; bronchial hype reactivity (BHR) data6 in the bronchodilator study the FEF25-75 showed an increment of 26 % and the PEF increased by 14 % with regards to the baseline study. 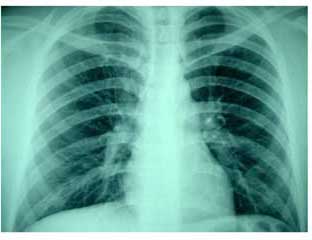 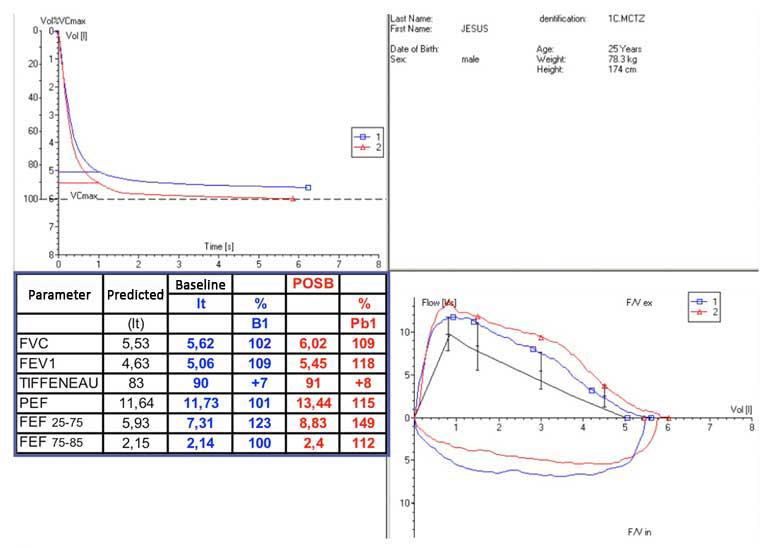 Figure 4 A restrictive atypical pattern was observed through the spirometry, which was performed 15 days after the accident


The number of arterial gas blood analysis performed at rest was 70 mm Hg, at exercise 67 mm Hg, and the one at decubitus was 62 mm Hg. This shows mild hypoxemia in decubitus supine. Because of the edema of the blood-air barrier, the arterial oxygen tension (PaO2) was lowered during the exercise test at five minutes; even though there were normal levels, this one dropped because of the edema in the blood-air barrier with consequent impairment of pulmonary reserve and diffusion time, which increases with supine position, showing signs of mild hypoxemia. The nonspecific irritation from massive exposure to cement caused acute rhinitis, bronchitis and alveolitis with a secondary edema. This could also impact on ventilation-perfusion index (Va/Qc) and, concomitantly, with respiratory failure.

The therapeutic indications consisted of 20 mg of prednisone each 24 hours; 6 mcg/2 formoterol puffs, three times a day; 200 mcg of budesonida in aerosol, two puffs three times a day; also, one vitamin E-400 each 24 hours was prescribed for 60 days for functional assessment. These indications were established in order to modify the therapeutic scheme based on the findings.

Fifty days after the accident the thorax radiographic study (figure 5) was normal; spirometry with mechanical ventilatory was in a normal range (figure 6),7 as well as the gas analysis at rest, during exercise and decubitus. 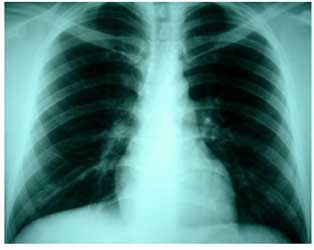 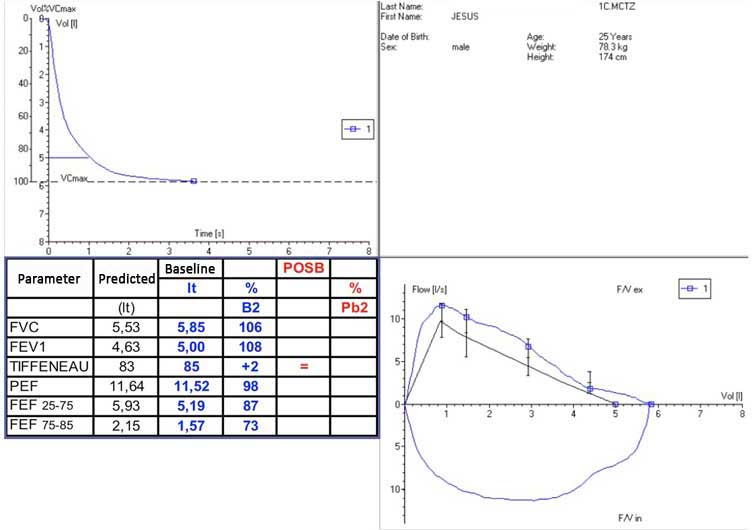 The worker had a check up 28 days after the accident: Good development, there were still chemical bronchioalveolitis symptoms in remission8 with few bilateral basal cackles (rales); therefore, it was considered convenient to continue with the same prescription and close monitoring. The subject was scheduled to have another check up 50 days after or before if the symptoms worsen. It was emphasized that the prescribed medicines should be taken unless the doctor indicated otherwise.

Fifty days after the accident, the person still had mild dyspnea and fainting. Physical exploration showed that papules persist with 1 mm in diameter and meliserical crusts with some pustules distributed in the anterior and posterior parts of the thorax and arms.

Currently, in normal ranges the spirometry and ventilatory parameters are normal, as well as the gas analysis and the chest radiography.

Physiopathology mechanism: Because the acute bronchioalveolitis, the pathogenesis is due to two agents: chromium and cement, both primary irritants, according to the Henderson and Haggard9 classification from Yale University, nonspecific inflammation occurs, that thickness the air-blood barrier (alveolar-capillary membrane) slowing the diffusion time which affects some red cells falling into hypoxemia; the PaO2 was normal at rest and, more interesting, when the test is done during exercise, saturation drops to normal levels falling figures to respiratory failure at supine decubitus, which thickness the blood-air barrier because of the edema. This bring us to the following conclusion: Swelling of the alveolar epithelial and the pulmonary interstice occurred; therefore, ideally the resistance of the airway should have been measured during the acute stage with a Jaeger ROCC or through body plethysmography in order to see the possible affectation of terminal bronchiolos and airways in general.

Given the results, it was urgent to prescribe a steroid treatment in order to avoid prophylactic ally an outcome of bronchioalveolitis and pulmonary fibrosis that, as soon as it appears is irreversible,10 and leads to death after two or five years. After 50 days the patient was discharged with suggested periodic monitoring, every month, at least three months, given that the bronchioalveolitis may have remission and exacerbation periods with the risk of fibrosis. The patient does not get back.

It would have been ideal that the patient, right after the accident, should have been signed into a clinic with experience in this kind of patients and have undergone an alveolar bronchial lavage in order to avoid bronchiolitos formation because by the alveolar epithelium being wet forged cement particles that once formed of synergistic manner with swelling of the air-blood barrier would cover partially and mechanically the alveolar epithelium, behaving as foreign bodies, diminishing in a subsequent manner the hematosis field. We suggested that a specialized medical service would be created for this kind of accidents, in order to avoid the evolution of bronchioalveolitis into pulmonary fibrosis.

After a thorough review of international literature,11,12 only one other similar case was found. This case was produced by fumes or other chemical agents as Toluene diisocyanate,13 which is another organic substance that produced a different clinical picture of pneumonitis by hypersensitivity14 and non chemical pneumonitis.

The main limitation in the described case is the worker’s lack of attendance to his quarterly medical appointment, which had been set as necessary to assess a constant and periodic reevaluation of the case and determine if it had been solved or if he had been recidivist and put the prognosis in danger. By the radiological evidence of pulmonary hypertension we required to have an echocardiogram.