Apocrine hidrocystoma associated with gouty tophi of the pinna


Apocrine hidrocystoma associated with gouty tophi of the pinna

Case report: A 78-year old female was referred to our division for assesment an asymptomatic translucent, well-defined cystic lesion located on the upper helix. The histological features were consistent with apocrine hidrocystoma coexisting with gouty tophi.

Conclusions: We report the second case of apocrine hydrocystoma located in the pinna, outside of ear canal and the first case of its association with gouty tophi described. It is difficult to know which lesion was first established and if the tophi may lead to ductal obstruction and subsequent cystic retention.

Apocrine hidrocystomas, also known as apocrine cystadenomas, are benign cystic dilatations of the apocrine sweat glands; many of these adnexal cysts are associated with the occlusion of glands. Clinically they tend to occur alone as translucent nodules or papules,1 most often located, and most reported in the literature, in the lower eyelids, although cases have also been reported in other parts of the face, head, trunk, and even fingers.2 By contrast, there are four cases described in the ear to date, and of these, only two were located outside the external auditory canal.3,4

We report the case of a 78-year-old woman with a history of hypertension, dyslipidemia, and hyperuricemia with blood uric acid levels at 8.1 mg/dL, without any prior episode of gouty tophi, in antihypertensive treatment with allopurinol, who attended outpatient Dermatology to assess a lesion on top of the right ear helix of approximately four years of evolution, but which had increased in the last three months, sometimes painful. Physical examination revealed a pink translucent nodular lesion, 1.3 cm, in the helix with a larger diameter and smooth surface, with a diagnosis of suspected gouty tophus. An excisional biopsy was performed, finding a cystic lesion in the papillary and reticular dermis that was not found in tension; the wall was lined by cells with signs of apocrine differentiation, secretion by decapitation, with positive PAS granules (Figure 1), large deposits of amorphous material were observed surrounding the lesion, which corresponded to eosinophilic urate crystals together with an inflammatory reaction (Figure 2). These findings led to the diagnosis of apocrine hydrocysts associated with gouty tophus. X-rays of hands, elbows, knees, ankles, and feet were made without signs suggestive of gouty tophus. 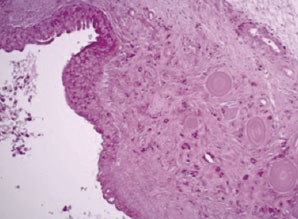 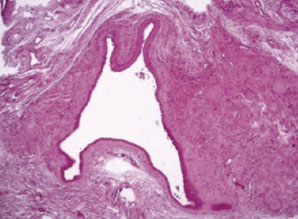 
Apocrine hidrocystomas were first described by Mehregan in 1964, as benign cystic dilations of the apocrine glands.5 They usually appear alone, and when they occur multiply they may be markers of two syndromes: Schopf-Schulz-Passarge, an autosomal recessive disorder, considered a rare variant of ectodermal dysplasia that, in addition to multiple periocular apocrine hidrocystomas, is associated with hypodontia, hypoplastic nails, hypotrichosis, and palmoplantar keratoderma; and Goltz-Gorlin syndrome or nevoid basal-cell carcinoma syndrome, mainly characterized by basal cell carcinomas, multiple keratocysts, and skeletal abnormalities.6

Histologically, apocrine hidrocystoma is presented as a cystic lesion located in the reticular dermis, which may be in tension, or not, with a lining epithelium consisting of a double cell layer with signs of apocrine differentiation, such as secretion by decapitation; secreting cells are PAS positive with granules in their diastase-resistant interior.2

On the other hand, gouty tophi are a clinical manifestation of gout due to deposition of monosodium urate crystals in connective tissue. Gout is the most common inflammatory arthritis in men, and although the incidence data are scarce, the results of several epidemiological studies from a wide range of countries suggest that the prevalence of gout has increased in recent decades.7 They manifest clinically as nodules or papules, usually solitary, firm, very commonly located in the ear, particularly in the helix.8 In histology, with dermal and subcutaneous deposits of monosodium urate crystals, if the sample is fixed in formalin, the crystals dissolve, leaving eosinophilic areas surrounded by giant cells with strange bodies, lymphocytes; but if fixed in alcohol, the crystals are presented needle-shaped and are refractory under polarized light. Etiopathogenesis is well established by the sustained increase in blood levels of uric acid over 6.8 mg/dL.9

Conversely, the etiology of apocrine hidrocystoma is unknown; it is believed that the stimulus that it can cause is ductal occlusion of the gland, causing retention of the secretion leading to a cystic dilatation, as in the case described by Agarwal et al.,10 in which there was apocrine cystic retention by silicone hydrogel. Other associations are described with apocrine hidrocystoma, such as its association with papilliferum syringocystadenoma and viral warts,11 without a causal relationship being established.