Prognostic factors of morbimortality in patients with emphysematous pyelonephritis

Prognostic factors of morbimortality in patients with emphysematous pyelonephritis


Background: Emphysematous pyelonephritis (EPN) is a severe infection of the urinary tract, caused by gas accumulation within the collecting system, the renal parenchyma, and/or the perirenal tissue. The cause of this infection is not known at all; however, it has been suggested that it is produced by the glucose fermentation provoked by enterobacteriaceae or anaerobic organisms. Our objective was to evaluate the predictors of morbidity and mortality in patients diagnosed with EPN.

Methods: It was carried out a historical cohort study of patients diagnosed with EPN in our hospital from March 2005 to December 2014. Patients with adverse outcome were identified. We defined adverse outcome as patients requiring stay in intensive care unit, who presented nephrectomy and/or who died. A multiple regression analysis was conducted to establish the relation of each clinical factor with the adverse outcome.

Conclusion: Thrombocytopenia, leukocytosis and Huang’s radiological class 3 are associated with adverse outcome in patients with EPN.

Emphysematous pyelonephritis is a severe urinary tract infection characterized by the presence of gas in collecting systems, in renal parenchyma, or in perinephric tissue;1 the gas formation mechanism is not fully known.

It has been proposed that it is produced by glucose fermentation by enterobacteria and anaerobes, and occurs mainly in patients with diabetes or urinary tract obstruction.2,3 The clinical presentation can range from a high urinary tract infection (fever, pain, and chills) to severe systemic involvement with septic shock.1

The diagnosis consists of demonstrating the presence of gas in a simple or contrasted abdominal CT scan. Huang and Tseng developed a classification sustained by tomographic findings in renal disease and proposed four degrees, the first three based on the severity of the condition, and the fourth when there is bilateral or unilateral impact in patients with a single kidney.1

It has been found that in Huang grade 4 patients who have only bilateral involvement of collecting systems have a better prognosis than those with extensive disease in a single kidney;4 due to this situation, it has been suggested to eliminate Huang class 4, subclassing each kidney according to severity.5

In addition to radiological classification, various clinical factors affect prognosis, which is associated with increased mortality, and whose presence demands more aggressive treatment.1,5-8

Treatment involves proper management of septic shock with fluids and broad spectrum antibiotics. Historically, treatment was based on nephrectomy and open drainage with a mortality rate ranging between 25 and 40%.8

The aim of this study was to determine the prognostic factors for adverse outcome in patients with emphysematous pyelonephritis admitted to the urology department of the Hospital de Especialidades of the Centro Médico Nacional Siglo XXI.

With the approval of the Local Research Committee, a historical cohort of patients diagnosed with emphysematous pyelonephritis admitted to the hospital mentioned from March 2005 to December 2014 was analyzed; it excluded patients with other causes of gas in the urinary system, such as those with catheterization, with entero-urinary fistulas, et cetera.

The following variables were analyzed: age, gender, diabetes, urolithiasis, state of consciousness (Glasgow scale), state of shock (hypotension associated with data of systemic inflammatory response), leukocytosis (leukocytes ≥ 12,000), thrombocytopenia (platelets ≤ 120,000), azotemia (creatinine ≥ 2.5 mg/dL), hyperglycemia (glucose ≥ 120 mg/dL), and disease stage (modified Huang tomographic classification with class 4 removed, corresponding to single and bilateral kidney involvement; patients with a single kidney were classified according to the degree of involvement of the renal unit, and in the bilateral condition the side with the most critical condition is considered).

Adverse outcome variables were identified, defined as patients who had to enter the intensive care unit, nephrectomy, or death. The initial treatment established was analyzed secondarily.

Bivariate analysis and calculation of odds ratio (OR) with 95% confidence interval (CI) for the ratio of each factor of poor prognosis was performed. Multiple logistic regression was used to determine the specific weight of each factor, and a risk index was made using a point scale to describe patients for whom an adverse outcome could be predicted.

The statistical significance for bivariate analysis was considered with p < 0.05, and for multiple logistic regression p < 0.1; SPSS version 22 was used.

As for subdividing groups by renal unit affected, Huang Class 1 predominated in single-kidney patients; Huang Class 1 predominated in the group with involvement in both kidney units; and in the third group with single-kidney involvement, the most frequent class by simple abdominal tomography was Class 1 with 28 cases. Class 3 was not reported in any patient with a single kidney, in four patients with bilateral involvement in whom the contralateral kidney was Class 1, and it was reported in 14 patients in the unilateral involvement group. 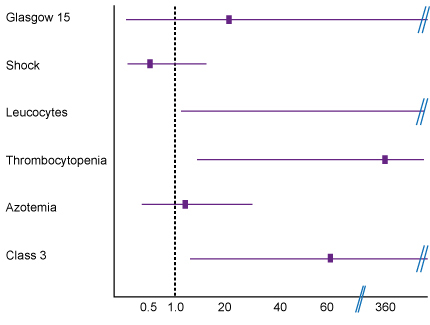 A risk index was constructed by a point scale to categorize risk groups using these three parameters. Patients with zero points were classified as having a good prognosis, and those with score ≥ 4 were related to worse prognosis- Table III.

18 patients were treated only with antibiotics, 45 required drainage of the renal unit, 80% by JJ catheter, and 20% by tomography-guided percutaneous access. 21 patients required nephrectomy, one with Class 1 and perirenal abscess (4.7%), eight with Class 2 (42%), and twelve with Class 3 (57%)- Table IV.


At the time of this review there were five deaths; of these, three were directly related to emphysematous pyelonephritis and the patients died of septic shock in the intensive care unit; one patient with Huang Class 1 died on the fifth day of their hospital stay of tumor thrombus migration into the right atrium; the cause of the thrombus was a concomitant renal tumor. The other patient died from consequences of chronic kidney disease seven months after the emphysematous pyelonephritis event.

Prognostic factors for adverse outcome of emphysematous pyelonephritis have been identified in different studies.4,9-12 The most significant are altered state of consciousness, shock, thrombocytopenia, renal failure, hyponatremia, and hipoalbumemia. Various studies have found that altered state of consciousness and shock are factors associated with mortality.4,9 In our study both were associated with poor prognosis; however, they lost their predictive power in multiple logistic regression.

Thrombocytopenia has distinguished itself as the most important factor in most reports, as confirmed by the meta-analysis by Falagas et al.12 Only in the study by Olvera-Posada et al. was thrombocytopenia not a factor determining prognosis; however, the platelet cutoff point used was ≤ 150,000 mm3, unlike most studies that used a cutoff point of ≤ 120,000 mm3, and one other that used a value of ≤ 60000 mm3.13 In the results of our study, thrombocytopenia was distinguished as a poor prognostic factor. It is noteworthy that, since no patient with thrombocytopenia had good prognosis, we had to include a patient with this factor to the good prognosis group to perform the multiple logistic regression calculation.

Renal failure has been associated by various studies1,4,11,13 as a prognostic factor for adverse outcome; however, in our study it emerged as a significant factor only in the bivariate analysis, losing its predictive power in the regression.

With respect to imaging studies, Huang reported that mortality was higher with higher radiation class, which is corroborated if we note that Class 4 had up to 50%.3 In the meta-analysis by Falagas et al. the authors found that the bilateral condition was poor prognosis; however, the degree of involvement of each renal unit was not specified.12 In a previous report we noted that the Class 4 radiological classification did not correspond to the severity of the condition, which agrees with that reported by Kapoor et al.4 This is because Huang ranking Class 4 includes patients with bilateral or single kidney involvement even if they are class 1, 2, 3a, or 3b, and actually what establishes the prognosis of severity is the class rather than bilateralism or having a single kidney. Based on these findings we have proposed eliminating Huang Class 4 and only evaluating the class of each renal unit.5

In this study having Class 3a or 3b (peri- or pararenal fat involvement) was established as the second most important factor for predicting an adverse outcome. Kapoor et al.4 found similar results to ours, unlike other studies.7,9,12,13

Emphysematous pyelonephritis mortality has been reported from 12 to 40%.1,4,7,10,11,13 The highest was found in the series by Wan et al., in which 34% of all the patients had Wan Class I thrombocytopenia (a platelet value ≤ 60,000), corresponding to Huang Class 3 in 42% and renal failure in 44%. The prevalence of these factors was lower in our series by 19, 24, and 28% of the total, respectively, which may explain the lower mortality found in our patients. Lu et al.9 reported 11.4% mortality, considering shock among the factors associated with mortality, which was reported in 12% of patients, similar to our series.

Huang1 reported a mortality of 18% and found thrombocytopenia, altered state of consciousness and shock as poor prognostic factors, which were found in 46, 9 and 14%, respectively; our series had a lower prevalence of patients with thrombocytopenia, which may explain the difference with their results in terms of mortality.

In our center mortality was lower compared to previous reports. This is probably due to the fact that 64% of the sample was in the favorable outcome group, and 78% in Class 1 and 2.

We propose classifying patients according to risk scale, which will identify patients to be associated with adverse outcome.

Thrombocytopenia, leukocytosis, and radiological Class 3 are associated with adverse outcomes in patients with emphysematous pyelonephritis. Early identification and appropriate treatment will positively impact the evolution of patients with these factors.