Communication with: Leonor A. Barile Fabris


Background: Rheumatoid arthritis (RA) is a chronic disabling disease, which leads to joint destruction and functional limitations. It diminishes health-related quality of life (HRQoL) and life expectancy. Frailty is a chronic inflammatory process related to aging that causes disability and affects HRQoL. The presence of comorbidity and polypharmacy are both related to RA severity. The aim of this study was to assess the prevalence of frailty and comorbidities in patients with RA.

Methods: Based on the American College of Rheumatology (ACR) criteria, we studied patients with RA that were seen at the outpatient clinic of the Rheumatology Department of a third level hospital. We applied the frailty criteria according to the Cardiovascular Health Study. We registered demographic data along with comorbidities and polypharmacy, using a cross-sectional, observational, and descriptive study design.

Conclusions: Prevalence of frailty in this study was unexpectedly high and so were comorbidities and multiple drug usage. Clinicians should make an early detection of signs of frailty and comorbidity in RA patients.

Rheumatoid arthritis (RA) is a chronic inflammatory disease that causes progressive joint damage. In Mexico it is presented in a range from 0.5 to 1.5 per 100,000 inhabitants,1 and generates considerable economic and social burden on the family and health systems. It produces functional disability and is associated with decreased life expectancy by seven years for men and three for women.2,3

Fragility syndrome (FS) is a complex entity that was formed in the last decade of the last century to refer to the clinical representation of decreased body reserve; it occurs mainly in the elderly and in patients with chronic degenerative diseases. The presence of fragility is a precursor of functional limitations, co-morbidity, and disability associated with the aging process itself.6

Fragility is a serious public health problem, since individuals who have it have a much higher risk of falls, fractures, infections, disability, hospitalization, and death, compared with subjects of the same age and gender.8 Fragility and comorbidity are, in all diseases, independent predictors of disability and poor quality of life.8

In RA there is sustained inflammation and multiple concurrent chronic diseases; the disease follows the subject throughout their life and could partner with FS. The association between fragility and RA has not been studied, so we decided to investigate the frequency of fragility syndrome and comorbidities in patients with rheumatoid arthritis.

With a transversal, observational, and descriptive design, consecutive outpatient patients of the Departamento de Reumatología of the Hospital de Especialidades of the Centro Médico Nacional Siglo XXI were studied from June 1 to December 1, 2009. The patients mentioned had to have a diagnosis of rheumatoid arthritis according to the American College of Rheumatology classification criteria.9 To be included in the study, patients had to be over 18 years and had to be able to take the fragility assessment scale, plus they had to have all the required information in the clinical record. All agreed to participate by giving informed consent. Patients that could not receive a full follow-up through the outpatient department, or who were not able to answer the fragility questionnaire, were excluded. The study did not include patients with other associated rheumatologic diseases, or physical or mental disability unrelated to rheumatoid arthritis.

The Fried et al. criteria10 were used to define fragility, which include:

The diagnosis of fragility syndrome was established if they had three or more criteria per Fried et al.

All comorbid conditions were registered by direct examination and from the information contained in the medical records.

For statistics, measures of central tendency were made with SPSS, version 20. 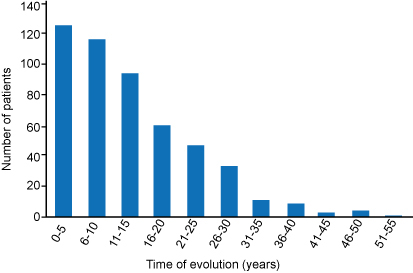 Figure 2 Distribution by time of evolution of rheumatoid arthritis 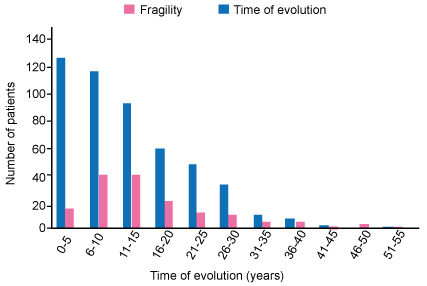 Figure 3 Time of evolution of rheumatoid arthritis and fragility 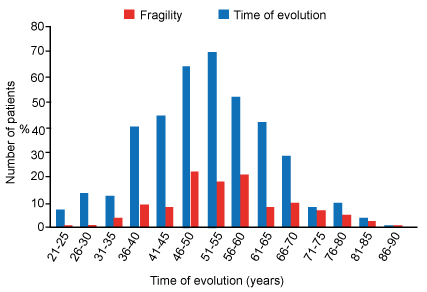 Figure 4 Age and fragility in patients with rheumatoid arthritis

Figure 5 Comorbidity of patients included in the study


Drugs taken by patients were recorded to determine the frequency of polypharmacy (use of 2 or more drugs for at least 240 days a year) and major polypharmacy (more than 5 drugs during the same period).

Fragility is a syndrome that involves increased vulnerability to stress, which is probably due to alterations in the regulation of multiple physiological systems. The biological basis of fragility in the elderly is unknown, but immunological and inflammatory mechanisms leading to changes in various physiological systems appear to be involved; these mechanisms produce anemia, sarcopenia, loss of muscle mass and weight, decreased motor performance, and low physical activity. All this is very similar to what happens in active stages or late stages of RA.6

Because of the parallels between physiological aging and the systemic inflammatory process caused by rheumatoid arthritis, the present study sought to determine whether RA is associated with a higher prevalence of fragility, as qualified by cardiovascular health standards.7

As far as we can determine, this is the first study of its kind in rheumatic diseases.

We found that RA is associated with an unexpectedly high frequency of fragility, which was 23.4% in the population studied. This represents a very high frequency, compared to the 3-7% range reported among people aged 65 to 75,8 or the 3.4% described in 55-year-old men with HIV infection of at least four years of evolution.12 One would expect a frequency over 10% in patients with terminal cancer more than in relatively young patients with an autoimmune disease. This could perhaps be explained by the presence of inflammation for extended periods, which may influence fatigue and wear.

As regards comorbidities, the average was 1.59, and the most frequent were hypertension and obesity, followed by dyslipidemia, acid-peptic disease, and osteoporosis. The high prevalence of hypertension is noteworthy, which could be due at least in part to the use of drugs that encourage it, such as NSAIDs and glucocorticoids.

Acid peptic disease had a relatively low prevalence when it came to subjects with polypharmacy; however, only clinical data suggesting this diagnosis were investigated, without performing digestive tract endoscopies.

If we take into account a number of the concurrent diseases such as obesity and dyslipidemia, patients are likely to have metabolic syndrome; however, the absence of diabetes mellitus is noteworthy, as this is a highly prevalent disease in Mexico, and one would expect even more in patients receiving glucocorticoids. Still, we do not have an explanation for this, except perhaps the use of chloroquine in some patients, because the drug may have a beneficial effect on blood sugar.

The presence of comorbidities in patients with a chronic disabling disease, such as RA, can condition a worse prognosis for both function and for survival; this prognosis may worsen further if fragility is added as an element of greater vulnerability.

The results of this study suggest that fragility should be investigated in patients with RA, even in young patients with short disease evolution. Monitoring the activity of RA and thereby limiting the presence of persistent inflammation may decrease the frequency of fragility and wasting syndrome; one of the limitations of this study is precisely that we did not do a correlation with RA activity, so we are currently working on that, by relating the presence of fragility with standardized assessment indices of the activity of rheumatoid arthritis.

To our knowledge this is the first study to analyze the prevalence of fragility in rheumatoid arthritis.