Background: Toxic megacolon (MT) is a potentially lethal complication of inflammatory, ischemic and infectious colitis. Usually it is related to ulcerative nonspecific colitis or Crohn disease. Recently it has been observed an increased in pseudomembranous colitis as cause of TM. The aim of this study is to describe the frequency, clinical evolution and prognosis of patients with TM.

Methods: Retrospective study, from January 2009 to January 2014 1500 patients were hospitalized in the Department of Coloproctology. We included 13 of 1500 patients with diagnosis of TM according to Jalan criteria and surgically corroborated. To determine the averages descriptive statistics was used.

Conclusions: The prevalence of TM is low with a high mortality. A prompt diagnosis and treatment can improve the poor prognosis in these patients.

Toxic megacolon (TM) is a potentially fatal complication of inflammatory, ischemic, and infectious colitis.1,12,22 It was first described in 1930 as colonic dilatation associated with sepsis, but it was not until 1950 that Marshak defined it as total or segmental colonic distension greater than 6 cm, concomitant with acute colitis and systemic symptomatology.1,2

Toxic megacolon is associated with nonspecific ulcerative colitis or Crohn's colitis, but any other inflammatory condition of the colon may predispose toxic dilation, among which are: inflammatory bowel disease, pseudomembranous colitis, Salmonella, Shigella, Campylobacter, Entamoeba, collagenous colitis, and ischemic colitis.3-7,14,19 Association with the chronic use of proton-pump inhibitors was recently published.8 Cytomegalovirus is an opportunistic agent that can cause TM, especially in the course of a disseminated infection, such as in HIV-positive patients and patients with ulcerative colitis treated with steroids.3,9

Grieco et al. report TM incidence in patients with ulcerative colitis between 1 and 2.5%.10,11 For Crohn's disease it is 1 to 6%.10 Other studies report similar incidences to 1 to 5%, with 20% probability that Crohn's disease debuts with TM.13 The current incidence of TM secondary to antibiotic-induced pseudomembranous colitis is estimated at 0.4 to 3%.1,15 The aim of our study was to describe the frequency, clinical course, and prognosis of TM at the Hospital de Especialidades Centro Médico Nacional La Raza.

The analysis was performed using descriptive statistics calculating percentages, means, and medians. Relative risk and chi-squared for correlation of variables were calculated. 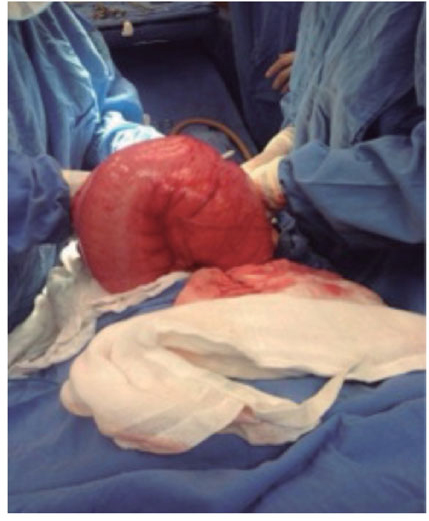 Figure 1 Patient with toxic megacolon where dilated transverse colon is observed, with a diameter of approximately 20 cm.


Hemato-oncological diseases as the cause of TM accounted for 23.1%, finding only the following two conditions: acute myeloid leukemia in 15.4% and non-Hodgkins lymphoma in 7.7% (Table II).

The immunosuppressive drugs most frequently associated with TM were hydrocortisone with 15.4%, and cytarabine and idarubicin by the same percentage. Antibiotics administered prior to TM diagnosis in our patients were: metronidazole (61.5%), followed by imipenem (30.8%), ciprofloxacin (23.1%), cefotaxime (15.4%), meropenem (7.7%), linezolid (7.7%) and moxifloxacin (7.7%). The surgical procedure performed most in our patients was subtotal colectomy with end ileostomy in 84.6% (Table III).

The mortality rate was 61.5%, corresponding to 8 of 13 patients, and the most frequent cause of death was septic shock (46.2%), followed by acute respiratory failure in 7.7% and disseminated intravascular coagulation in 7.7%. Total colonic perforation was in 23.1%.

The average hospital stay was 21 days, with a maximum of 101 days and a minimum of 5 days. The average time from suspected TM to surgical treatment was 5 days, with 18 days maximum and 1 day minimum.

The prevalence over 5 years was 0.008% of total admissions to the Servicio de Coloproctología (1500 patients). We found 3 patients with colonic perforation, two of whom died (Table IV).

TM is a potentially fatal complication of inflammatory, ischemic, and infectious colitis.1,12,22 We observed that TM is more common in males at 79.9%, with a mean age of 47.69 ± 18.3 years; average albumin was 2.5 g/dl, which could indicate that the patient's nutritional status may influence the development of this pathology.

Our work indicated that CNUC is a major cause of TM; both CNUC and pseudomembranous colitis are presented as the underlying cause in 30.8% each, followed by neutropenic colitis in 23.1% and Crohn's disease in only 7.7%. In pseudomembranous colitis, the drugs are most often associated are imipenem in 30.8% and ciprofloxacin in 23.1%, followed by cefotaxime (15.4%), meropenem (7.7%), linezolid (7.7%) and moxifloxacin (7.7%). Our results regarding the pathology most associated with TM coincide with those published by Frasko, who reports the most frequent reason for TM as ulcerative colitis (36.8%, 7 patients), followed by pseudomembranous colitis (26.3%, 5 patients) and ischemic colitis (15.8%, 3 patients).24 Autenrieth says to this that TM is most commonly associated with inflammatory bowel disease (IBD); however, lately, the epidemiology has shifted towards infectious causes, specifically due to an increase in colitis due to Clostridium difficile, possibly due to the widespread use of broad-spectrum antibiotics, with which we are in agreement.25

Systemic arterial hypertension occurred in 7.7%, same as DM2, so we believe that these conditions are not related to TM. We found that hemato-oncological diseases trigger TM in 23.1%, the most important being: acute myeloid leukemia and non-Hodgkins lymphoma, secondary to the use of immunosuppressive drugs to treat these diseases.

Because it is a disease with very low incidence and prevalence, it is not thought of as an initial diagnosis, and usually when TM is suspected there is a delay in diagnosis of five days on average, which results in our study in all patients having surgery as first intention, without the opportunity for initial medical management as other authors report.23 84.6% underwent subtotal colectomy plus end ileostomy, same as Frasko,24 with postoperative complications in 61.5%, with surgical wound infection as the most frequent.

Our mortality rate was 61.5%. The mortality of our patients is higher than that reported in the literature, where Strauss, in a study of patients with TM, reported an overall mortality of 19%, higher in patients managed medically (27%) than in those who had early surgery (19.5%). The mortality rate rises to 41.5% with colonic perforation from 8.8% in those without evidence of perforation.1,16,20 Emergency surgery has a mortality of 30%, compared to 5% if it is elective.10,18 Surely our mortality is higher for the delay in diagnosis, resulting in emergency surgery in all our patients, which leads to colonic perforation in some of them (in 23.1%), with 66.6% mortality in these. The overall prevalence of TM at the Hospital de Especialidades Centro Médico Nacional La Raza over five years is 0.008% of total admissions to the Servicio de Coloproctología (1500 patients). The prevalence is lower than that reported in the world literature.10,15,21

TM prevalence is very low compared to other diseases, but its mortality is high, and the clinical course and prognosis of these patients is bad, and for this reason we believe that early recognition, rational use of broad-spectrum antibiotics, proper treatment, and prompt surgical intervention are paramount.