Background: Infection is the most common complication related to permanent pacemaker implantation. The objetive of this study is to establish the prevalence and determine the frequency of risk factors associated with exteriorization of cardiac pacemakers at the Department of Cardiac Electrophysiology at the UMAE Hospital de Especialidades “Dr. Antonio Fraga Mouret” Centro Médico Nacional La Raza, Instituto Mexicano del Seguro Social.

Methods: A descriptive cross-sectional study from September 2005 to September 2010, where, for the analysis of the risk factors we selected cases and controls by age, sex and the diagnosis of Diabetes, or not. Was calculated measures of central tendency (mean, median and mode) and chi-squared, Fisher exact test and exact odds ratio.

Results: 3192 cardiac pacemakers were implanted, identifying 83 exteriorization cases, where 46 of them were selected for cases and controls, and the mean age was 71 years.

Conclusions: Our prevalence of exteriorization of cardiac pacemakers is 2.6 %, these results are similar to previously published studies. None of the risk factors described are present as a cause in our population. The surgical technique used may be an important risk factor, so further studies analysing all techniques are needed.

Permanent cardiac pacemakers (PCP) have been used to treat the "slow pace" of the heart, known as sinus bradycardia or atrioventricular block, for more than fifty years.1,2 This has improved patients’ quality of life and survival; every day more pacemakers are installed, and many patients have even reached the point of replacing the generator once the theoretical longevity of the pacemaker has passed. However, the need for a pacemaker increases with age and is more common in males.3 Unfortunately, this increase in the number of implants has been accompanied by increasing complications, the most dreaded being infection in the implant site and consequent risk of death.4

Infection is the most common complication related to permanent pacemaker implantation, and this has been reported between 1-7%, with a lethal risk of 3 to 19%.5 Some risk factors that predispose to infection and externalization of pacemakers have been defined, such as the presence of diabetes mellitus (DM), heart failure (HF) and chronic kidney failure (CKF), the latter associated with glomerular filtration lower than 60 ml/min, relating to a risk of infection up to 38.7%.6

The study was conducted in the Departamento de Electrofisiología Cardiaca, UMAE Hospital de Especialidades "Dr. Antonio Fraga Mouret" of Centro Médico Nacional La Raza of the Instituto Mexicano del Seguro Social. We selected patients with pacemaker implantation diagnosis from September 2005 to September 2010. The information obtained for analysis was: age, sex, presence of diabetes mellitus, functional class according to the New York Heart Association (NYHA), glomerular filtration rate lower than 60 ml/min, use of oral anticoagulants, history of corticosteroids, prior generator replacement, presence of fever twenty-four hours prior to implantation of PCP, and temporary use of pacemaker before PCP implantation. Regarding the type of incision made, it was identified if this was horizontal, oblique, or in the deltopectoral groove during implantation, if antibiotic therapy was applied, and the time before making the implant. Also if they presented complications associated with the implant such as endocarditis, infection of the pacemaker pocket and re-externalization; plus the time it was presented after the implant; finally a patient interview was conducted to verify if it had been externalized or if there had any complication following implantation. The study was cross-sectional, descriptive; for the analysis of the factors they were handled as cases and controls, and were chosen by matching them by age, sex, and presence or absence of diabetes. Measures of central tendency (mean, median, and mode) and chi-squared test, Fisher’s exact test, and odds ratio were calculated.

3192 endocardial PCP were implanted in the chosen period, and of these 83 cases of PCP externalization are identified, giving a prevalence of 2.6%; the variables for externalized PCP cases can be seen in Table I; for cases and controls 43 patients were selected and the other 40 were excluded. The externalization of 43 patients with pacemakers were matched with 43 controls who had not presented externalization. The general characteristics of case and control patients studied can be seen in Table II. Cases and controls were needed to determine any factors associated with the externalization of pacemakers. An analysis of risk factors, and the difference between them, compared to controls can be seen in Table III. No statistical significance was found, in patients who had a previous temporary pacemaker implantation, 13 patients were cases (30.2%) compared with 12 patients (27.9%) in the control group, and the average time of temporary pacemaker presence was 2.5 days with a standard deviation of ± 4.7 days; the antibiotic used most was dicloxacillin. Depending on the time in which infection occurs, it was found that the most common type was delayed, presented in 24 patients (55.8%) (Figure 1). Median time of externalization was 24.8 months. An analysis so far not described in the literature on the type of surgical technique relative to the start time of the externalization was not significant (Table III). 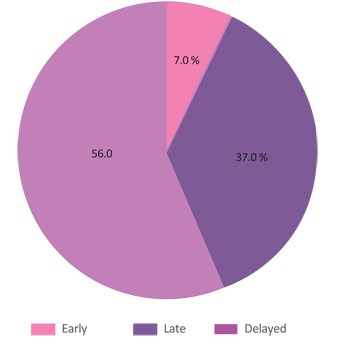 The number of pacemaker implants is increasing, as shown in records of various societies and in our hospital.3 Initially, cardiovascular surgeons were the ones to install them, and the approach that was necessary at first was epicardial, due to the size of pacemaker generators. However, the improvement of the stimulation electrodes and decrease in size made possible the endocardial approach with percutaneous approach or via cephalic vein dissection; complications are minimized, but implantation site infection remains a very serious complication. There is wide variation in the percentage of infection, but it usually lies from 1 to 7%. Some authors have shown that there was probably prior infection, the presence of a central venous catheter, or long-term use of corticosteroids, as well as history of cancer, which are significant risk factors for the development of infection.6,7 Even the presence of fever twenty-four hours before the implant or the presence of temporary pacemakers are risk factors for developing infection.8

We believe there may be other factors not well described in the literature as a cause of erosion of the pacemaker pocket, such as possibly the implant technique used, since there are several techniques for the surgical incision and operators choose the one they are most proficient at, and sometimes they make variations of it, but all have advantages and disadvantages. Deltopectoral incision provides access to the cephalic vein, but limits access to the subclavian, so the operator needs to ensure that the pocket is made medially to the incision, this technique makes it difficult to achieve the subpectoral pocket.14,15 Horizontal incision provides easy access to both the cephalic vein and the subclavian. Oblique incision is similar to horizontal but parallel to the Langer’s lines and has somewhat more difficult access to the cephalic vein, but causes less scarring and has a better cosmetic outcome.14

The deltopectoral incision is made 1 cm below the collarbone, in the deltopectoral groove. For horizontal incision, the cut is made 1-2 cm below the middle third of the clavicle, extending laterally across the deltopectoral groove about 1 cm. The oblique incision is made running parallel and approximately 1 to 2 cm below the lateral third of the clavicle. The total size of the incision is of 4 to 5 cm, but may vary according to the size of the device and the thickness of the subcutaneous cellular tissue.14 There is no known evidence in the literature showing that the type of incision is responsible for risk of externalization. According Nery et al.,16 in a study of risk factors and consequences, a population of 2417 patients was studied, and only 24 cases of device infection were found, and of these the rate of infection requiring operation and device reimplantation was 2.1%.16 In our study, known risk factors involved in externalization were included as well as new factors not described in the study population, and no statistical significance was found in the externalization of the device, allowing new studies to demonstrate what the factors are that really influence this particular population. Our externalization prevalence found in this particular population was 2.6 externalizations per 100 implanted pacemakers, which is in the range mentioned in the literature of 0.13 to 12.6% implantations completed.8 According the literature, it was found that externalization predominates in males.7 The age distribution is consistent with the findings in the literature, because in this age group implants are most commonly due to degenerative disease of the conduction system.7

In this study population, type 2 diabetes mellitus showed a very low incidence, which runs counter to that described in the literature, indicating that in this population externalization is often due to multiple microvascular complications and increased risk for infections.7 Heart failure was documented in 23%, which is slightly lower than that documented, but it did not show statistical significance for externalization, although other authors have demonstrated the presence of heart failure in 46%.4,6 The presence of kidney failure in our patients was lower (7%) compared to 38% of kidney failure described previously.6 This risk factor did not present statistically significantly increased risk of externalization. There are studies reporting the use of warfarin 11.3%, corticosteroids 8% and 1.6% for fever in patients with externalizations.6,8,10 In our cases this did not appear in any patient.

There are no reports on the ideal type of incision for the surgical technique used; according to Rajappan et al.17 it depends on the choice of the operator. In our series, the most used was the oblique incision in the control group, and horizontal in the case group, and although the association with externalization was not significant (Table IV). Prior to implantation, 51.2% of patients did not receive antibiotics, the remaining patients did not show a uniform distribution in the time of antibiotic administration. This finding contrasts with what is previously written, where the use of an intravenous antibiotic at least 30 minutes before surgery is recommended. Dicloxacillin was the antibiotic most frequently used, which also differs from literature, where it is proposed to use a cephalosporin intravenously, often cefuroxime or cefazolin, and if there is allergy to penicillins and cephalosporins, vancomycin is recommended, but these factors did not show statistical significance in increasing the risk of externalization. The presence of endocarditis is not documented, in contrast with what is previously published, where the presence of pacemaker endocarditis is 10% of the cases of infection of the pocket. The most common types of infection (in time of appearance) were delayed and late forms, which agrees with the literature, where it is reported between 37 and 35% respectively. The proportion of delayed externalization was higher in our study, for which we do not know the exact reason. Externalization time is slightly longer in our series than that described previously. Sohail et al. reported that the time between pacemaker implantation and the occurrence of infection in 138 patients was, on average, 415 days (13.8 months).7 It is noteworthy that in our study none of the risk factors already described by others authors were found with statistical significance, so we think that the extent to which these risk factors occur in our population is not enough to be a risk for externalization.

The prevalence of externalization in the Departamento de Electrofisiología Cardiaca at the UMAE Hospital de Especialidades Dr. “Antonio Fraga Mouret” of the Centro Médico Nacional La Raza was 2.6% of patients with pacemakers implanted, which is consistent with other published studies. However, in our study population none of the risk factors described are present as a cause of externalization. However, the analysis of the surgical technique used can be an important factor in this process, so further studies are needed to validate this factor that could contribute to the externalization of the pacemaker, as it has never been analyzed.