Family dysfunction and malnutrition in the elderly

Family dysfunction and malnutrition in the elderly


Background: Malnutrition is highly prevalent in the elderly. It is related to biological, functional and psychosocial aging factors. The objective was to investigate the association between family dysfunction (FD) and malnutrition in the elderly.

Methods: Cross sectional study. Through family Apgar Short Nutritional Examination (MNA) were documented FD (Apgar ≤ 7) , and poor nutritional status (≤ 22 in the MNA) in a sample of 103 elderly over 60 years, excluding those with special diet or any professional prescription disease determinant of weight changes. We calculated odds ratio (OR) with a 95 % confidence interval (CI). The variables were compared using chi-squared test.

According to our country’s Sistema Nacional de Vigilancia Epidemiológica, currently one in 10 people is 60 years old or older, and by 2050 this proportion is expected to double.1 In addition to the aging of the population, nutritional problems of aging have gained prominence because they determine increased morbidity and general mortality.2 Malnutrition and risk of malnutrition are common features in studies done on nutritional and health status of the elderly patient. Some changes are typical of aging, such as sensory, oral, or digestive changes, coupled with adverse drug effects and other factors such as reduced functional autonomy, dementia, or widowhood,3,4 which directly affect nutritional status. In most cases, malnutrition is associated with adverse socioeconomic conditions, depression, and certain functional and psychosocial factors inherent to aging, such as loneliness, family isolation, lack of care or support networks, and family dysfunction,5,6 that make the elderly population particularly susceptible to suffering nutritional problems.7-9

Using an analytical cross-sectional design, 103 geriatric patients assigned to the Unidad de Medicina Familiar 11 of the city of Colima, Colima were included by consecutive sampling.12 The study included subjects over 60 years of age13 who had a stable family functionality status in the last six months. The study excluded those who were subject to a special dietary regime prescribed by a health professional or those with any disease that conditions weight changes.

The Mini Nutritional Assessment (MNA) was used to detect the nutritional status of the older adult. This instrument detects the risk of malnutrition in a timely manner from the evaluation of 18 items including anthropometric measurements and three types of evaluations: overall, dietary, and subjective. Scores from 24-30 indicated that the risk of malnutrition was normal, from 17-23 there was risk, and under 17 they had malutrition.5 For purposes of this study nutritional status was considered adequate in subjects with a score of 23 or more, and inadequate if they had 22 points or less.

The study was approved by the Local Ethics Committee and each study subject gave informed consent to be included.

The sample size calculation was made using the formula for the difference of proportions,12 based on a study by Gutiérrez.14

There were no differences between the groups of family functionality with respect to sex, occupation, education, marital status, socioeconomic status, family type, or stage of life.

The prevalence of family dysfunction in all study subjects was 33% (n = 34). 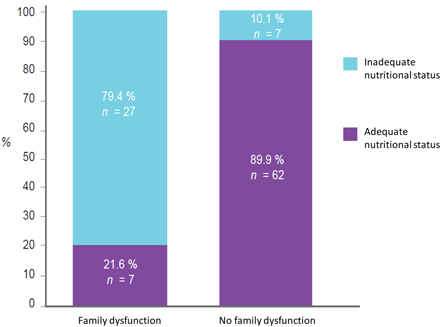 The association between the variables of family functionality and nutritional status becomes apparent when it is documented that individuals with poor nutritional status as assessed by MNA (score ≤ 17) are associated with severe family dysfunction in 100% of cases. Of these, 60% had low socioeconomic status and 30% average socioeconomic status. Of subjects with MNA scores ≤ 17, 70% were overweight or obese, and only 30% had subnormal weight by World Health Organization classification. With that we can say that the coexistence of obesity with outright unsatisfactory nutritional status is possible.15 In fact, obesity —evaluated by bodily mass index— was the predominant body weight disorder in older adults in this study (76%), and only 24% had normal body weight. This is similar to previous data showing that the proportion of obese older adults is 2.5 times that of older adults with normal weight.16 However, no differences were found in the proportions of obesity between the two family functionality groups studied.
Although the initial analysis of results showed that family dysfunction was significantly associated with risk of malnutrition as documented by MNA, the interrelationship between social, psychological, and nutritional factors has not been sufficiently investigated. A previous study found that 50.5% of older adults showed risk associated with moderate malnutrition, 18.6% had severe malnutrition, and 69.1% was at distinct risk of malnutrition as assessed by MNA.14

Family functionality does not always show association with other aspects of the older adult. For example, the percentage of older adults living alone (widowed, divorced, separated, or single) was similar between groups of family function. It is known that the proportion of seniors without a partner increases markedly with age, a phenomenon more evident in the case of women. For example, in Havana 90% of women over 75 have no partner, while 43% of men the same age group are in the same situation.17 Moreover, it is clear that the state of family functionality is also independent of the stage of life the family is in. Thus the stages of contraction and dissolution had similar percentages of family functionality. The study findings showed a slight predominance of families who were in the stage of family contraction. This behavior is similar to that found by Pelaez, who showed that in countries like Argentina and Uruguay the proportion of older adults in the dissolution step exceeds 25%, which exceeds Cuba or Brazil, where less than 15% of older adults are in this stage.18 This may be due to different situations such as family or social support networks, housing availability, and socioeconomic status.

Other examples are gender, education, and socioeconomic status. The sex distribution was similar between the two groups of family functionality. The Encuesta de Salud, Bienestar y Envejecimiento 2003 (SABE) has documented that chronic health problems, such as low weight, are more prevalent in women than in men.18 As for schooling, similarity was found in the proportion of older adults with schooling equal to or greater than primary between the two groups of family function. It is known that health depends substantially on the educational level of older adults.18,19

Contrary to expectations, family functioning showed no differences in the socioeconomic status of the older adult. So, it was possible to have a dysfunctional family of either middle or low socioeconomic status. Several authors have documented that socioeconomic status does not go hand in hand with a better ability to establish family support networks.20 Workforce participation of the older adult is a determining factor that influences the classification of family socioeconomic status. Even though workforce participation declines with age in all countries, rates of older workers are quite high. However, in countries like Uruguay, the age at which older adult workforce participation declines is relatively young (65 years). In our country, older adults’ exit from the labor market occurs later and tends to be a gradual phenomenon. These results differ from those obtained in the 2003 SABE survey. Those results showed that the labor participation rate in the 60-64 age group was 40 to 80%, which was halved in women of the same ages.18 It also reported that in Mexico exit from the labor market occurs later than in other Latin American countries, and the fraction of older adults receiving some kind of pension is very small and is even lower for women.18-20

The association with disorders in family functioning is not exclusive to nutritional status disorders, rather these have also been associated with other diseases such as diabetes, pneumonia, and hypertension.21-23 In addition, various studies have shown the association between some psychosocial factors and nutritional status.24 So, depressive symptoms also predict the incidence of malnutrition in older adults because of their association with loss of appetite and consequent weight loss.

The study of nutritional status in older adults is important for different reasons. The main reason is because it has been documented that nutritional status influences the functional capacity of the older adult. Therefore, states of malnutrition often have a significant impact on the health of people in this group and can lead to loss of functional capacity, depression, and therefore a poor quality of life.25 In a transversal study evaluating the association between some psychosocial, nutritional, and functional disability factors in 54 Canadian seniors aged 65 to 98 years old, Johnson et al. found that 17% of those surveyed were at risk of malnutrition as documented by a validated test (the Minitest Nutritional Assessment).26 In the present study we found that 34% of subjects presented risk of malnutrition, of which the highest proportion was in subjects with familial dysfunction. With these data, one notices the increased proportion of older adults at risk of malnutrition compared with those found in the Canadian study. These differences in the behavior of nutritional status according to family functionality may reflect specific population characteristics. Additional studies should evaluate the impact of socio-cultural and economic characteristics of both populations of older adults in order to discern the role of each of these aspects in nutritional status.

It is necessary to continue research with longitudinal designs in which, beyond evaluating functions related to adequate family functionality, other determinants are analyzed that have been studied only marginally and could also be associated with the risk of malnutrition.27 These factors could include economic situation, level of personal satisfaction, social support, stress, and depressive symptoms. With this one could determine the direction of the associations between these factors and the nutritional status of older adults. Studies related to the various factors associated with the risk of malnutrition in the older adults would allow, over time, the design of comprehensive and targeted programs and the establishment of public policies aimed at preventing and treating malnutrition risk and thereby improving the health and quality of life of older adults.28