Background: Candida endophthalmitis is related to immunosuppression state, intravenous catheters , invasive procedures and parenteral feeding. It is estimated that between 2% and 10% of endophthalmitis are endogenous, within fungal etiology the most frequently isolated microorganism is Candida albicans. The infection by C. dubliniensis is reported in less than 2 % of the cases of infection by Candida at systemic level and few reported cases of endophthalmitis. The clinical presentation is poor vision , vitritis, cottony deposits, chorioretinitis, and necrosis. The confirmatory diagnosis must be made with vitreous culture and the treatment is based on combination of vitrectomy and intravitreal antifungal .

Clinical case: It is reported a case of a patient with enterocutaneous fistula, long hospital stay with parental nutrition that cause endophthalmitis without immunosuppression.

Conclusions: Endogenous endophthalmitis by C. dubliniensis is barely documented in the literature. Candida endophthalmitis should always be considered in patients with risk factors, in order to provide timely diagnosis and appropriate management, yet the prognosis in these patients is poor for function and organ preservation and for life from complications involving these patients from associated pathologies.

Endogenous fungal endophthalmitis is a serious infection with devastating optical consequences. It is reported that between 2 and 10% of all cases of endophthalmitis are from endogenous causes and are related to states of immunosuppression, intravenous catheters, indiscriminate use of antibiotics, use of intravenous drugs, and parenteral nutrition. The vast majority of fungal infections are caused by Candida albicans, while infections by non-albicans species have been poorly documented. The species Candida dubliniensis was identified as a new species in 1995 by J. Sullivan. The isolation was done in Dublin, Ireland, so was called "dubliniensis"; it was done in an HIV-positive patient with an oropharyngeal infection.1

There have been only three reported cases of endophthalmitis from Candida dubliniensis in North America until 2012.2

Presenting symptoms include decreased visual acuity, sudden onset of floaters, and eye pain. Various studies report up to 65% bilateral condition, so review of the contralateral eye is necessary.3

Clinically speaking, retinal lesions are initially focal, deep, white, and fluffy in appearance. Retinitis extends contiguous to the vitreous humor that is suffering from vitritis; it can even form small abscesses that generate glassy bulbs like a rosary or pearl necklace, which can be associated with anterior uveitis.3

In the first instance, diagnosis is primarily clinical with typical ophthalmoscopic appearance of the lesions associated with a history of risk factors for this type of endophthalmitis. Confirmatory diagnosis is microbiological with vitreous culture. It is recommended not to do it by vitreal puncture due to the low rate of positivity and the high degree of complications. Posterior vitrectomy via pars plana is preferable, as it is diagnostic and therapeutic.3

The empirical treatment proposed is:

The pattern of sensitivity presented by C. dubliniensis highlights its high sensitivity to antifungals used empirically, with the exception of fluconazole, which has overexpression of Mdr1p protein as its most salient mechanism of resistance.5

A 62-year-old female patient who lives in Mexico City, with a personal medical history of chronic plantar mycosis without treatment (Figure 1) and who presented with signs of community-acquired pneumonia, which was complicated by pseudomembranous colitis. The patient was admitted to gastric surgery because of perforation of the cecum. She underwent total colectomy complicated by enterocutaneous fistula and the patient had a long hospital stay and parenteral nutrition due to abdominal sepsis and persistence of the enterocutaneous fistula. She reported limited bilateral vison for three weeks. 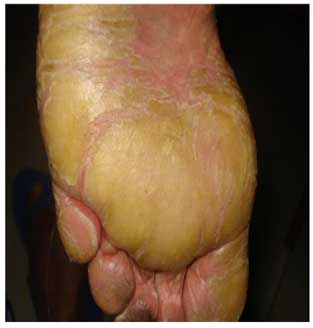 
Examination found visual acuity (VA) of the right eye (OD) MM at 1 m. OS NM 20/400(.)20/50, cellularity in the anterior chamber. At the bottom of bilateral eye fluffy whitish lesions in vitreous and in vitreoretinal interface in the macular area of ​​the OD and periphery in the OS (Figure 2) were observed. According to the ophthalmologic examination and background, presumptive diagnosis of fungal endophthalmitis was made on both eyes. Empiric treatment was begun with amphotericin B intravenously. Because of the characteristics, it was decided to perform diagnostic and therapeutic vitrectomy in the OD with intravitreal application of: amphotericin B + 5.5 µg voriconazole 100 µg both eyes. A week later, vitrectomy was performed in the OS. After receiving the results of vitreous culture, Candida dubliniensis was isolated, resistant to amphotericin B and susceptible to voriconazole. Amphotericin B was suspended and intravitreal treatment of voriconazole was used weekly in three doses (200 mg/mL), as well as intravenously. Monitoring was continued with indirect ophthalmoscopy and optical coherence tomography (OCT) (Figure 3). Given the favorable development (Table I, Figures 4 and 5), it was decided to complete the treatment and controls were done. Currently the patient is stable, with inactive lesions, but with visual sequelae due to OD macular scar. 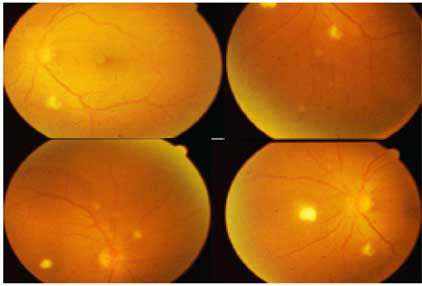 Figure 2 Initial ophthalmoscopy. Fluffy, creamy-looking lesions in vitreous and vitreoretinal interface are observed, with vitritis in the right eye on the macular area and in the periphery of the left eye

Figure 4 Ophthalmoscopy at the end of treatment. Fluffy, creamy-looking lesions are observed in vitreous and vitreoretinal interface with vitritis in the right eye on macular area, and in periphery of the left eye. Images after end of treatment. A clear improvement is observed to the point of inactivation of the signs

Figure 5 Optical coherence tomography (OCT) at the end of treatment. After vitrectomy and three doses of voriconazole, this optical coherence tomography of the left eye shows reduction in microns of the lesion and signs of clear involution, with residual lesion in the vitreous cavity without spreading in extreme periphery and epiretinal membrane not involving foveolar area

Endogenous endophthalmitis is a very serious infection. There are several reports describing final visual acuity able to count fingers or better in only 33%, and enucleation or evisceration as definitive treatment in 16% of patients. Most endogenous endophthalmitis due to Candida are attributed to C. albicans. Until 2012 there were only three reported cases of endophthalmitis from Candida dubliniensis in North America. C. dubliniensis has a worldwide distribution and most isolates are susceptible to amphotericin B and azoles.6 Appropriate therapeutic management is complicated by the opportunistic nature of fungi, besides the low intraocular penetration of most antifungals used. In the case of our patient, vitrectomy is indicated as first choice due to anterior chamber involvement and intense vitritis. Intravitreal application ensures adequate therapeutic concentrations. Importantly, intraocular candidiasis can cause intense anterior uveitis, fibrinoid, with major synechiae and even with hypopyon, with the progression of the inflammation toward the anterior segment. This anterior uveitis does not indicate infiltration of the fungus into the iris or ciliary body; rather it is an associated sterile inflammatory reaction.7

After receiving the microbiological report, it was decided to stop treatment with amphotericin B and to start management with voriconazole, which had a favorable response. Intraocular penetration of voriconazole has been reported in multiple studies, which report successful results. Throughout the whole treatment, comprehensive control was conducted by the area of ​​Internal Medicine to monitor systemic effects of the treatment.

In this case there was an excellent clinical response to intravitreal application. The vitrectomy targets consisted of removing the vitreous infiltration, reducing fungal load, and promoting intraocular diffusion of voriconazole, to obtain the vitreous sample that would establish the definitive etiologic diagnosis. Obtaining antibiogram was essential for managing the resistance reported to the administration of amphotericin B.

No complications related to the vitrectomy were observed (retinal detachment being one of the most reported).

The differential diagnosis should be made with similar-looking lesions, mainly with toxoplasmosis retinitis, herpetic acute retinal necrosis in initial stages, other endogenous endophthalmitis, syphilitic uveitis, and intraocular lymphoma.8
Toxoplasmosis retinitis can make the differential diagnosis difficult. It differs from vitritis in that it is more localized in the lesion, its course is less violent and progressive, and it never has growth and proliferation into the vitreous with spreading or cotton balls, which are characteristic of candidiasis. Also it is commonly associated with a high frequency of cerebral involvement due to toxoplasma. This involvement can be seen in computerized tomography/nuclear magnetic resonance.8

Endogenous endophthalmitis due to Candida dubliniensis is a rare condition, of which only three cases in North America were reported until 2013. This is the first case reported in Mexico. The incidence of candidemia due to C. dubliniensis is also not known with certainty because of the technical difficulty of the morphological difference from C. albicans. However, the correct isolation and characterization of the Candida species is highly important because of the diverse resistance that each species has to antifungals.9

The patient in this case has several risk factors that should cause suspicion of fungal endophthalmitis. Such factors include parenteral nutrition, the use of intravenous catheters, a long hospital stay, abdominal surgical procedures, and receiving multiple antibiotic therapies. The result in this case was very favorable, because the treatment was based on the microbiological reports.

Between 20 and 60% of the samples obtained by paracentesis of aqueous or vitreous humor are negative, in addition to increasing the risk of retinal detachment due to increased retinal membrane traction. The biopsy of vitrectomy lesions is positive in a high percentage, plus it is a diagnostic and therapeutic procedure.

Given the septic conditions of the injection of the drug, one should never forget the unexceptional opportunity of mixed endogenous endophthalmitis (yeast + Pseudomonas maltophilia/Staphylococcus/Bacillus cereus/etc.), so culture must also be done for aerobic and anaerobic bacteria, and initially one should assess the association of amphotericin B with a wide-spectrum antibiotic.10

For a timely diagnosis and appropriate therapy, it is necessary to always consider the risk factors associated with Candida endophthalmitis to improve prognosis. Yet it is still a therapeutic challenge, usually with bad results, because of the systemic associations in these patients. To start treatment it is not necessary to get the diagnosis from intraocular mycological confirmation, because often it is not possible.

More epidemiological studies are needed to define the therapeutic management of C. dubliniensis, and the frequency of association with endogenous endophthalmitis.

The final results depend on timely diagnosis and treatment. In cases of vitreous opacities, retinal infiltration with proximity to the optic nerve and foveal area, or visual acuity less than or equal to counting fingers, diagnostic and therapeutic vitrectomy should be considered.