Obstructive sleep apnea syndrome and hypertension. Evidence of their relationship

Obstructive sleep apnea syndrome and hypertension. Evidence of their relationship


The purpose of this review is to analyze the relation between obstructive sleep apnea and hypertension. We present epidemiological data of the respiratory disorder and its association with high blood pressure, as well as physiopathological interactions between both conditions, the diagnostic methods, and the impact of treatment on pathophysiology and prognosis.

One in three Mexican adults has hypertension (HT), a chronic non-communicable disease that imposes a huge economic and social cost,1 and that contributes to cardiovascular diseases being among the leading causes of morbidity and mortality in the country.2,3

Obstructive sleep apnea (OSA) is not a rare disease, but is little diagnosed.4 That it is more common in subjects with hypertension than in the general population, that hypertension occurs more frequently in patients with OSA, and that the respiratory disorder is especially related to the resistant variety of hypertension5 justify the purpose of analyzing the link between the two conditions, and explaining their epidemiological, pathophysiological, clinical, and therapeutic interactions.

Definition, diagnosis, and epidemiology of OSA

In OSA there is a repetitive pharyngeal collapse, either partial (hypopnea) or total (apnea), greater than 10 seconds; the resulting sleep fragmentation, hypoxemia, hypercapnia, elevated intrathoracic pressure, and sympathetic hypertension explain the usual clinical expressions: daytime sleepiness, snoring and waking, or microsleeps.6 The main predisposing factors for OSA include age, male sex, obesity, smoking, and alcoholism, most of which are also HT risk factors.4

Nocturnal polysomnography is the standard diagnostic workup; this measures the average number of apneas and hypopneas per hour or the sleep apnea-hypopnea index (AHI), a variable that is used to determine the magnitude of OSA: AHI < 5 is normal. OSA is mild when AHI is between 5 and 15, moderate when the range is between 15 and 30, and severe if > 30.6

The overall estimated prevalence of OSA ranges from 3 to 7% in adult men and 2 to 5% in adult women;7 it increases with age, and after age 65 up to 24% have an AHI that diagnoses the illness.8 In Mexico City the prevalence is 10.1% in subjects aged 40 years or older, and this population is considered as the highest risk for OSA and its cardiovascular consequences among several countries in Latin America.9

Epidemiology of OSA and hypertension

The coexistence between OSA and hypertension is well established, and the respiratory disorder is one of the most common causes of the secondary form of hypertension.10 While more than 50% of patients with OSA are hypertensive,11 up to 40% of the population with hypertension has demonstrated the respiratory abnormality,5 which is present in eight out of 10 subjects with resistant hypertension.12 There is still controversy regarding the participation of other risk factors, particularly obesity, to explain the association between the two diseases.13 However, the independent and linear association of OSA with hypertension has been documented prospectively, in a dose-response relationship between baseline AHI and the future development of hypertension in follow-up, particularly if not properly treated.14,15

Pathophysiological aspects of hypertension in OSA

Neurohormonal activation, changes in chemoreceptors and baroreceptors, endothelial dysfunction, oxidative stress, and systemic and vascular inflammation are possible generators of hypertension in OSA.

Increased sympathetic tone (measured with microneurography techniques) and blood pressure during sleep in patients with obstructive apnea are the best-documented facts, showing an increase in both variables and their attenuation by treatment with continuous positive airway pressure (CPAP).16

OSA is a common secondary cause of resistant HT,10 but also the respiratory disease is extremely common in patients with this form that is refractory to multiple antihypertensive treatments;12 a correlation has been observed between plasma aldosterone concentration and the magnitude of apnea in subjects with this form of hypertensive abnormality, and it is shown that blocking the hormone reduces the severity of OSA; mineralocorticoid excess may aggravate the apneic state by facilitating the accumulation of fluid in the neck and increasing upper airway resistance.5

The sympathetic variety of the autonomic nervous system is chronically activated through chemoreflexes that obey prolonged intermittent hypoxemia, the predominant regulatory mechanism of ventilatory and circulatory response to changes in blood oxygen content.17 The first chemoreceptor detecting these changes is the carotid body, which facilitates sympathetic hypertonicity even when hypoxia has stopped, which could partly explain daytime elevated blood pressure (BP).17

Vascular reflex responses of contractility and heart rate depend on the baroreceptors, nerve endings located in the carotid and aorta and responding to the stretching of the arterial wall, to compensate for fluctuations in BP. In OSA there is a decrease in baroreflex sensitivity resulting in a loss of control of BP during apneas and improvement after chronic treatment with CPAP.18

The imbalance between vasodilator and vasoconstrictor substances produced by the endothelium is an early marker of vascular damage and may precede the onset of clinical cardiovascular manifestations.19 This dysfunction, which is explained mainly by the decrease in synthesis of nitric oxide, the most important vasodilator molecule derived from the endothelium, is greater if OSA is severe,20 and although it can occur in normotensive apneic individuals, the defect is magnified in cases with HT.21 After treatment for two months with CPAP, vasodilation induced by acetylcholine, a variable measuring microvascular endothelial function, was significantly improved in patients with OSA in contrast with control subjects.22

The cyclical hypoxia and reoxygenation of sleep apnea generate reactive species of oxygen and oxidative stress, and activate proinflammatory transcription factor NFkappaB;23 in turn, this stimulates production of other systemic proinflammatory markers such as IL-8 , tumor necrosis factor alpha, C-reactive protein, and intercellular and vascular cell adhesion molecules (ICAM-1, VCAM-1); these key elements in the genesis of atherosclerosis revert with the classic treatment for this form of respiratory impairment (Figure 1).24 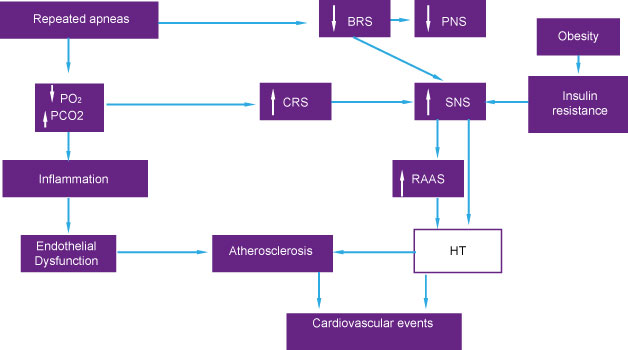 Diagnostic aspects of hypertension in patients with OSA

In apneic subjects, the underestimation of hypertensive disorder is documented when the measurement is made conventionally in the doctor's office (42%) compared with waking hypertensives (58%) and overnight hypertensives (76%) in ambulatory BP monitoring (ABPM).11 Another situation frequently ignored but which has been seen in almost one-third of patients with OSA is masked hypertension,25 which is discovered when the clinical measurement is normal, but the numbers outside the office are abnormally high; on the other hand, the overestimation of BP if there is white coat hypertension (which exists only in a medical office setting), or using the wrong cuff to make the measurement, can lead to a false diagnosis of resistant hypertension. Therefore, in subjects with nocturnal respiratory failure, especially in case of suspected resistance to triple antihypertensive drug therapy including a diuretic, it is recommended to use ABPM, which shows diurnal and nocturnal BP and improves cardiovascular risk prediction.26 Characterizing night hypertension and the diastolic or systolic-diastolic nature of the hypertensive condition in OSA, most possible to discern with the ambulatory quantification system, is accompanied by early changes in baroreflex sensitivity and increased ventricular mass.11 In fact, in practice this continuous recording modality anticipates information on mortality significantly better than the clinical determination of the hemodynamic variable.27

The 10 to 20% decrease in average nighttime BP relative to the level recorded during the day is normal, and its absence is part of the typical "non-dipping" profile of individuals with OSA; so, the discovery of the phenomenon, which has been attributed to sympathetic activation by apneas and frequent awakenings that occur during sleep and whose prevalence is directly related to AHI and the degree of oxygen desaturation,28 may suggest the presence of respiratory disease,26 and reminds us of the great prognostic impact that this variable imposes in this group of patients.27

Treatment of hypertension in OSA

Although there is no evidence of a significant effect of weight loss on BP in patients with OSA, the common presence of obesity and sedentary lifestyle with this group leads us to recommend behavioral changes that reduce these risk factors as part of a comprehensive strategy for management.26

The evaluation of the major classes of antihypertensive drugs in patients with hypertension and OSA revealed no differences in their effect on daytime BP in ABPM or when measured in the office;13,26 although selective beta blockers were better to reduce nocturnal figures during continuous recording, probably due to its effects on sympathetic activation,29 the available information is insufficient to guide the choice of antihypertensive treatment in patients with OSA.13,26,29

The fact that aldosterone-mediated chronic hypervolemia may contribute to the severity of the apnea explains why spironolactone added to the treatment regimen for resistant hypertension improves respiratory disturbance and lowers BP.5 It has even been proposed to include this in all patients with uncontrolled hypertension despite the use of three or more hypotensive agents.30

The classic nocturnal CPAP treatment in patients with essential hypertension and OSA achieves a modest but consistent decline (2.2 mmHg) in mean BP, according to the results of some meta-analyses.31 This effect is slightly higher in resistant hypertension.32 However, it must be remembered that even reductions in diastolic blood pressure as small as 2 mmHg result in a 17% decrease in the prevalence of hypertension and 6 and 15% in the risk of coronary artery disease and cerebrovascular disease, respectively.33 The hypotensive response associated with the use of CPAP seems to depend on the severity of the apnea and basal BP,31 and is achieved only if tolerated for a minimum range of time ranging from 4 to 6 hours.34

Despite the differences in the characteristics of patients, in the study design, and in estimating the effects of treatment with CPAP on BP in subjects with OSA, the results of recent meta-analyses indicate that the benefit of the reduction may be higher in the subgroup with severe OSA, with nocturnal hypoxemia and uncontrolled hypertension (Table I).35

In recent years interest has grown considerably in investigating OSA and its relationship to cardiovascular complications. The link between sleep apnea and hypertension is undoubtable, and, although a cause and effect relationship is not shown, there are important advances in the understanding of the epidemiology, pathophysiology, diagnostic methods, and treatment binomial. The use of CPAP as the primary therapeutic measure seems to be especially useful in those in which these two conditions are more severe and patients with greater adherence to the device, but its long-term impact on prognosis is still to be learned. For now, the available information is insufficient evidence to recommend the identification and treatment of hypertension associated with OSA and the detection of respiratory sleep disorders in the hypertensive population.26